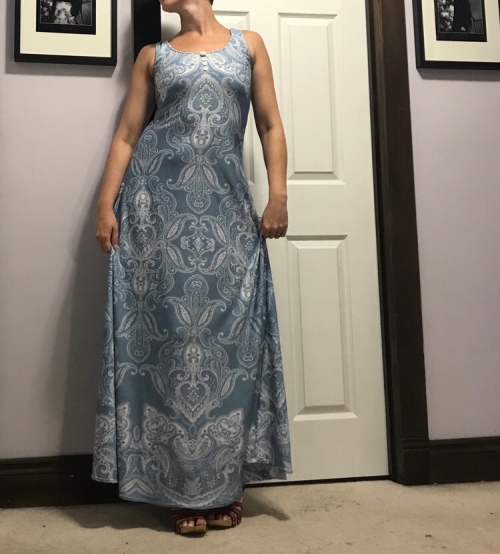 After the Great Linen Pants Debacle, I needed a palate cleanser. And, as it just so happens, after looking for it all summer my copy of Jalie 3246, my go-to maxi dress pattern, finally showed up. Right in the drawer where it was supposed to be, so I guess I’m blind. The only question was, which of the several fabrics I have mentally earmarked for maxi dresses should I use?

Well, this denim-look-plus-paisley ITY-type print has been taunting me since I bought it last fall. I was originally envisioning jeggings (though really it’s thin—they would be leggings) but I actually have enough for this dress (which only takes 1.5m) plus the leggings, so they may yet happen. 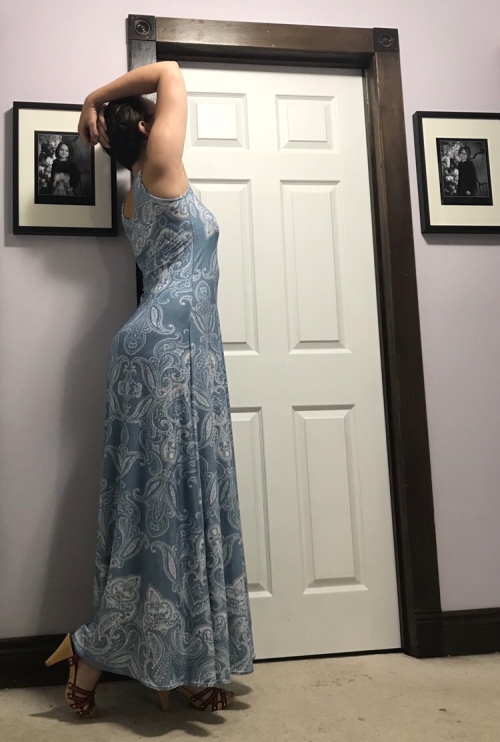 The pattern is dead simple, although I complicate it slightly by adding a back seam, for fit and fabric frugality. And I add a much wider flare to the skirt, because the skirt as drafted is too narrow for proper walking, which adaptation I actually haven’t put on the pattern—I draft it out on my fabric every time. I should really change my pattern. Someday. 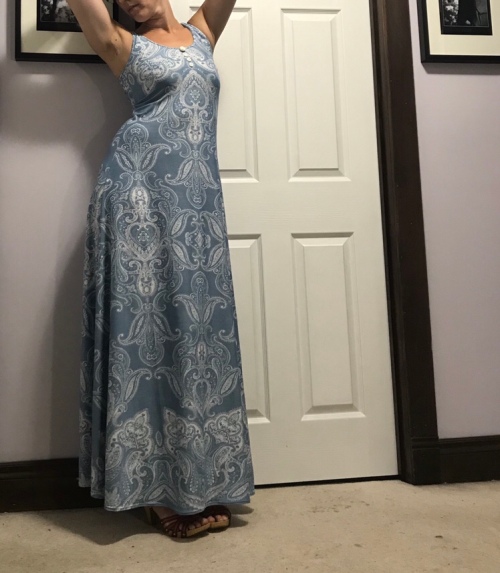 I was very careful about centering the large motif on the front. Less so about where the parts of the motif would fall—maybe not the most flattering arrangement over the bust. On the other hand the design was a bit of a border print so I was running my pattern pieces on the cross-grain, so any wiggling up or down would’ve required piecing or shortening. 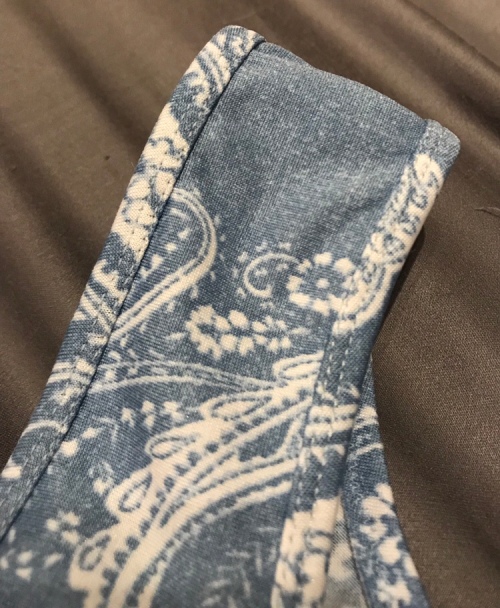 I’m pretty happy with how my bindings at arm and neck worked out. I was a good girl and did lots of testing. It’s the same triple-fold binding I almost always use, with the inclusion of 1/4″ clear elastic for stability because my non-elasticated tests tended to go wavy when stretched. I did not test my hem and it is not nearly as nice. Should’ve used steam-a-seam. 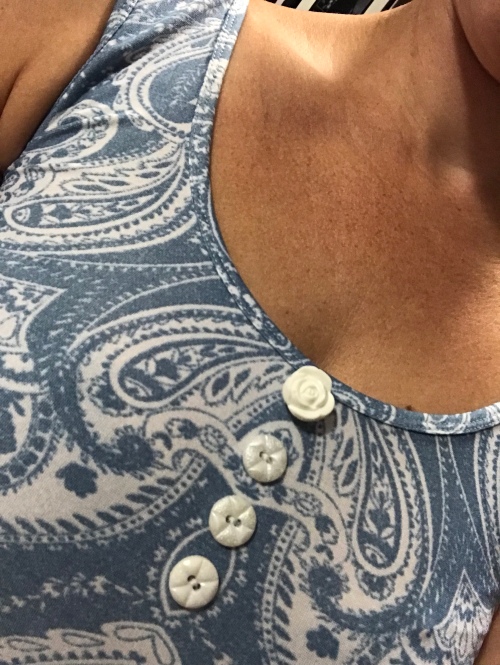 I’m kinda bored with this modestly scooped neckline after my four other versions of this dress, so I really should’ve changed it up. A square would’ve been nice, or maybe a V in the back. Anyway, so I added some decorative buttons. A lace-up détail would’ve been nice, too, but would have required more forethought and planning than I had put into it. 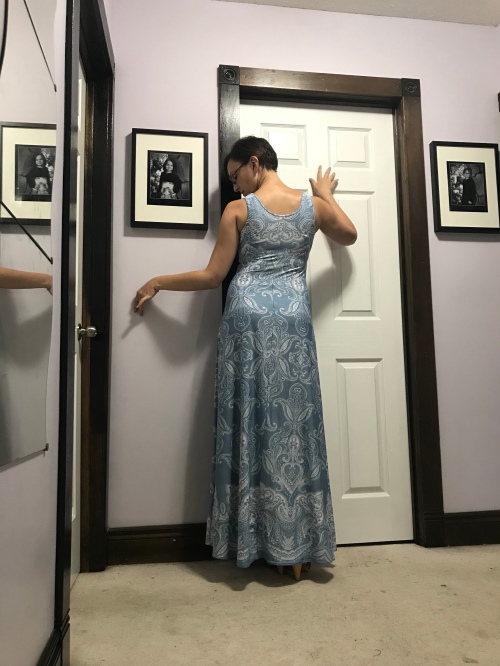 Other than that, there’s not much to say. It’s quite long. It’ll get worn. 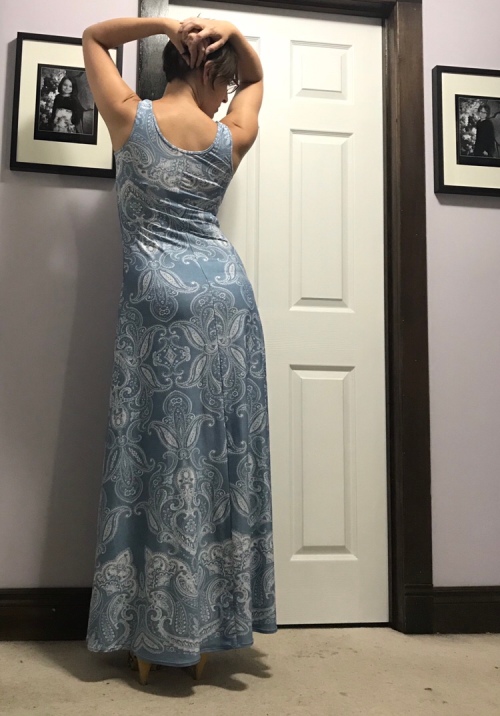 And it’s my last bit of vacation sewing. 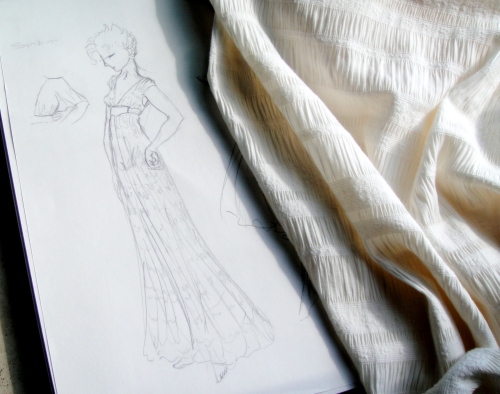 This is all Oona’s fault (yes, it’s an old post, but she linked it to me recently). Or maybe Patty’s. I haven’t decided. The Sew Weekly challenge this week is “The Perfect Sundress,” too, which isn’t helping. I haven’t done any of their challenges thus far, but it seems like a nice little community (though the site layout is still a bit puzzling to me), and since this week’s challenge coincided with something I’ve been wanting to sew anyway, I figure I’ll give it a bash.

So here it is. This fabric was part of my Easter thrift store haul. I wasn’t sure what I was going to do with it—that strong, woven stripe is a bit limiting—but when maxi-dresses started being dangled provocatively in my face (see above links), I knew. 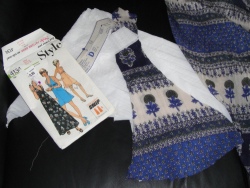 Now, it’s not as if I have a shortage of maxi-dress pattern options. 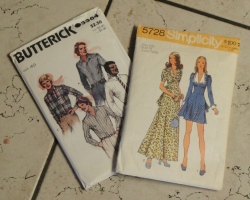 But, I may be stuck on this sketch I doodled out the other night. The neckline is like Oona’s, the sleeves more like Patty’s. It could be as simple as a rectangle cinched by an under-bust sash, but I’m thinking a bit more shaping would probably be flattering. 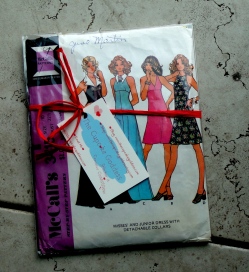 I guess if I’m going to make this up this week, I’d better decide, though. 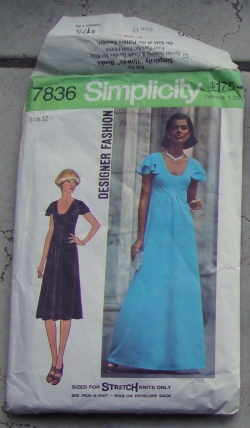 So many maxi dresses, so little time…