This is another one of those projects that seemed like a good idea at the time. Actually, i didn’t even mind the making so much. It was the making myself start making it that sucked eggs. I have a terrible time motivating myself for unselfish sewing.

The backstory is, I made my dad a shirt for Xmas—a short sleeved Negroni—back when we first moved back from Cowtown, and he has dutifully worn it every time we get together with them ever since. Which is flattering the first few times and then you realize he is definitely just wearing it because you are there, and then you have no idea if he actually even likes it at all.

In either case, though, it seemed like a good idea to give him another daughter-made option. So at least he’ll have options he doesn’t like.

After some digging around my Fabricland, I finally found a shirting that inspired me. It’s actually a home dec fabric, a medium weight cotton twill with a woven-in stripe. It’s a little thicker and a little softer than a quilting cotton.

For a pattern, since I was doing this as a shop project, I went with McCall’s 2447, in all its dated glory. I didn’t want a super-fitted or overly fussy pattern, and it actually seems fairly nicely drafted. It has a proper grain-elevator placket for the sleeve, a neat pocket detail, separate button band, and the collar isn’t as huge as I had feared. I checked the finished measurements and opted to make a medium rather than a large, because it’s hugely oversized. I’ve added 2″ to the sleeve length, which will hopefully be enough. I also made a cut-on button band rather than going with the separate route, because I was worried about stripe issues, but I like the option of the separate band for contrast and detail purposes.

I got a bit of coordinating quilt cotton to make contrast facings and a few other touches of color. The fun of menswear is in the little details, and it takes the right mindset for me to get in the mood.

I don’t feel like this is a crowning example of shirt making. My stitching isn’t quite as precise as I’d like, and the soft twill liked to shift around. I topstitched some of it at about 1/4″ and some is edge stitched and I like the edgestitch better, but not enough to go back and redo it all. I used three machines in construction, not counting the serger, which I only used to finish the armscye since I’m too lazy to flat-fell. I used my usual Janome for the main construction, with walking foot to facilitate stripe matching on the collar and back yoke. I used my grandmother’s old Rocketeer for the buttonholes. And I used a 70s-era Elna a friend gave me last summer for the top stitching, since it has a speed control, which is pretty much my favourite thing for top stitching ever. 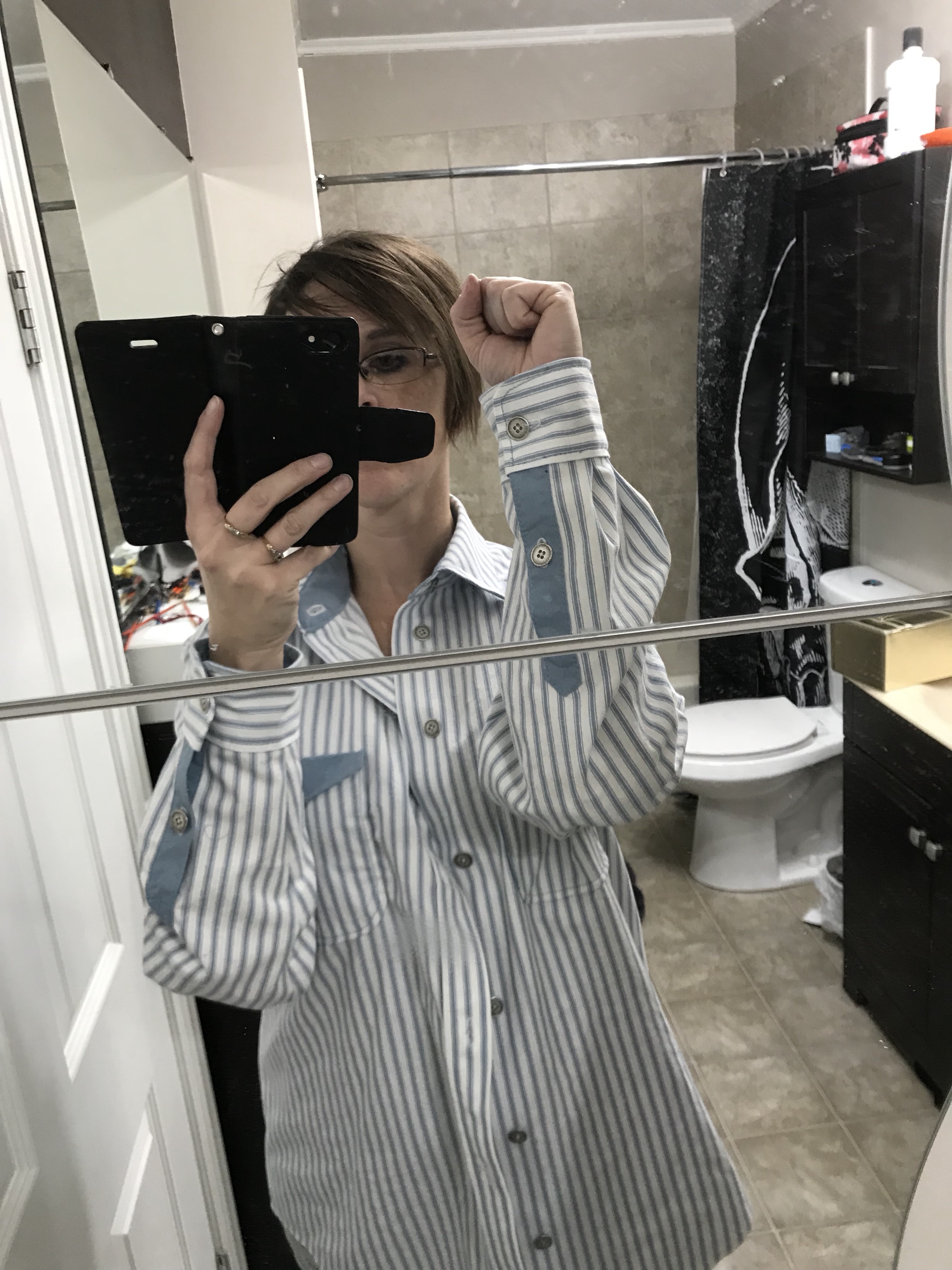 I kicked ass on the buttonholes (once I smartened up and put wash-away stabilizer under them all.)

I really like my pocket mod. (I used the pattern piece provided but not the construction method.)

And I think for a slouchy comfy shirt it might actually be just fine, even if I won’t be showing off my fine details.

To be honest, the more the topstitching trauma fades, the happier I am with it. It’s a soft, casual shirt but not sloppy, which I think SHOULD suit my dad’s current retired-professor lifestyle.