A Shirt for my Sweetie

The Muse of Creative Titles has deserted me, sorry. Well, really, there was pretty much zero creativity in this whole project. I made the two prime men in my life, my husband and my father, shirts for Christmas. It occurs to me that perhaps I should’ve made one for my brother, but, well, he’s in Australia. He gets heat for Christmas. Every year.

A shirt for my Father

Since I was stressed for both time and mental energy, I followed the pattern, the Colette Negroni, to the point of slavishness. I made a size M for the hubs and a size L for my Dad. I was terrified that both would be too small, but both turned out pretty much perfect. I made zero pattern alterations (since I used the short-sleeve version. I hadn’t bought enough fabric for long sleeves for either version, because I am braindead; I would’ve lengthened the sleeves on both if I were doing long sleeves) and used fabric I had picked up ages ago, a grey and black linens with (probably unfortunately) a bit of stretch. And yes, plenty of that good ol’ linen wrinkliness. I had actually chosen the pattern and the fabric for my husband ages ago, as the short-sleeved version of the Negroni has the exact style details of a linen shirt my husband bought during our one and only (and very overwhelming) trip to New York, back in… well, we didn’t need passports to do it, let’s leave it at that. Which shirt he’s subsequently worn to death. 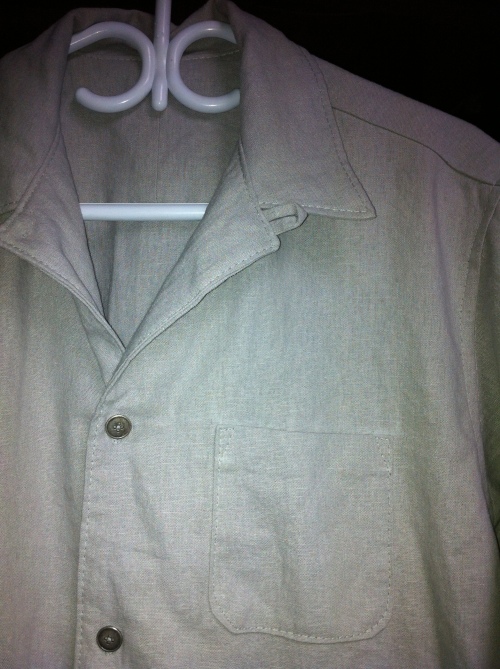 Collar closeup. I did the little loop as per the pattern; I probably wouldn’t do it again. It doesn’t seem like it’d ever be functional.

Unfortunately, the odds of me getting actual modeled shots from either giftee are pretty much nil, so, you get stuck with boring hanger shots. Most of which are of the grey shirt for my Dad, since, well, photographing black.

I used an extra-long triple stitch for the topstitching. 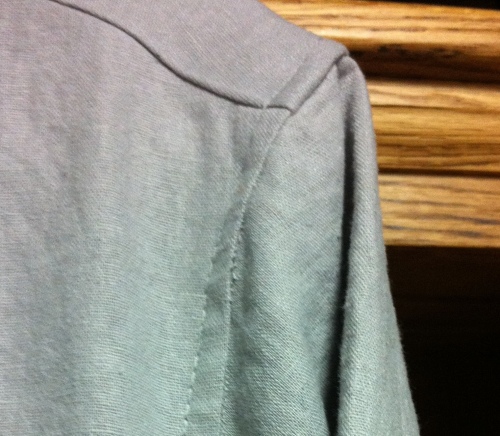 I flat-felled the shoulder seams according to the pattern’s instructions. The first set turned out quite badly, the second set somewhat better. I’m not sure I’m completely in love with the method, but like I said, zero mental energy for researching creative techniques. It’s certainly adequate. (And I have a long history of attempting to flat-fell shirts and giving up in disgust and going with the serge-and-topstitch method.)

My Dad’s shirt had to feature one detail that my husband’s never do—a pocket. I didn’t do two out of fear of having to make them match, but I knew he’d want one to pop his glasses into. Which he did, within moments of putting on the shirt. So, win. I do like the method for finishing the top of the pocket, and the little triangles to secure the top corners. I should’ve used a template for the pocket, though, it was not as well-shaped as it should’ve been.

I made round-ended buttonholes, the kind a buttonholer puts in, using a setting on the Janome Memorycraft, just because I could. And, well, my buttonholer generally ends up being precisely not where I am most of the time. Like most of my sewing supplies these days, since they’re spread out across three different houses. /sigh.

And that, as they say, is that, and probably more detail than either shirt really deserves. I think they were both well-received, though. So I am satisfied. And I promise I’ll have something more fun to blog about soon! 🙂