Syo also wants Fauxlodias. For whatever reason, I didn’t want to make her some just like mine, from Jalie 3022, so I looked around and eventually went out and bought (!) Kwik Sew 3498. Because, apparently there is a pattern-style out there that I don’t already own.

Not being as trusting of Kwik Sew patterns as Jalie (I just haven’t made quite as many, and some people report them being oversized, although the pattern reviews for this pattern were reassuring on that front), I wanted to make a trial version before I went all crazy ruffly. So I used up much of the last of my supplex making a plain-Jane version. Syo isn’t thrilled about this, but she will survive—although whether this pair ever gets worn again remains up in the air. Personally, I think they’re a great style, the sort of thing you can wear to dance practice or around the house or even to school without looking out of place, but I’m over thirty so my opinion doesn’t count. 😉

She is not as in love with them as I am.

I made the size L (10), which is a smidgeon larger than Syo’s hip measurement. After measuring her inseam, I added 3 cm to the length, which I have to say was not an alteration I ever expected to make for a child who was never over the 5th percentile for height. Having compared the pattern with the Jalie 3247 shorts I made Syo for her birthday, I thought the rise in the KS pattern was a bit high (actually, I thought that just looking at the envelope models—it’s sitting in a good spot on them but it looks like they have pulled the crotch down to somewhere it wouldn’t normally sit). I removed 1.5 cm from the front, and took a wedge out from nothing at the CB seam to 1.5 cm at the side-seam (the exact opposite of what I usually do to Jalie patterns, by the way. 😉 ) They are still plenty high enough. 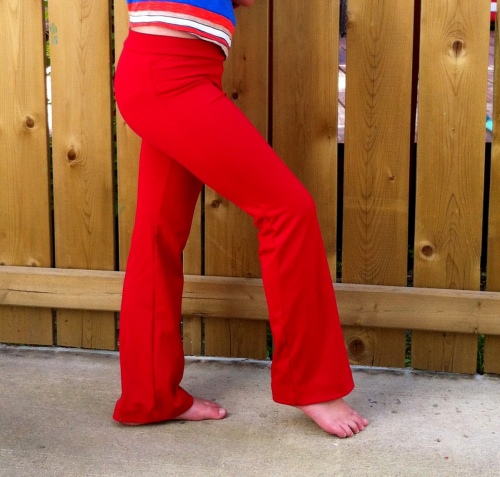 The length is ample but not really excessive—for dance pants I don’t regret adding it (although it occurs to me that I will probably have to shave it off in the flare version since that will probably have rolled hems), and it gives her a bit of room to grow. Assuming she ever voluntarily wears these. But if she doesn’t, I can still hope that Fyon will. Or the Waif. The great part about having a string of girls in the family.

The coolest feature of these pants (aside from the “basic stretch pants with side-seam” that I was looking for), is the V-option front waistband. I made it up exactly as directed. I’m not sure if that little dip-down is me or the pattern or just a natural feature of this kind of finish when it’s slack; it’s much less evident when she’s wearing them, which you can kinda-sorta-see if you scroll down to the last picture in this post. I added (or tried to add) clear elastic into the seam where the band attaches, to give a bit more stay-up-oomph to the pants. This worked OK where I didn’t slice half the elastic off with the overlocker. There is apparently an elastic-applicator foot for my new serger. I want. 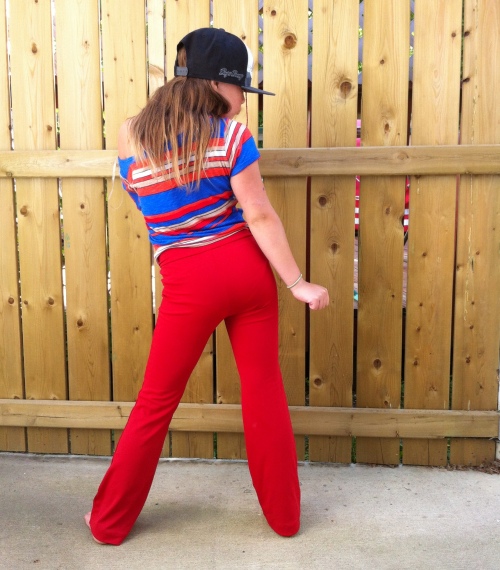 There is plenty of length, but they don’t drag on the ground (and that’s in bare feet.)

The pattern calls for one-inch hems, which I gave a try at. I hate hemming knits—none of my machines are particularly good at it. This is the triple-zig-zag stitch on the White, and at the presser-foot-pressure-setting (say that ten times fast, I dare you.) that doesn’t produce ripples, it also barely feeds the fabric through, so it’s really hard to keep the stitch-length even. However, they’re not overly visible so I’ll call it a win, for me if not for home-sewing-is-as-good-as-storebought. While I’m fantasizing, someday I will have a coverstitch machine. Someday.

There is plenty of coverage for her round derriere. Although Syo has my broad shoulders, she also appears to be getting at least a modified version of the Gigi butt.

She is very disappointed that this version didn’t have a knee-high slit. Also I was making her pose in full-length pants (wicking material or no) on a hot day right before going to her friends’ house for a sleepover. So maybe she’ll feel more enthusiastic about these later. Maybe?

Hey, a mom can hope. I guess at worst, I could cut them off into short shorts. She wears the snot out of those.