And something for Syo

Syo was a bit put out with all the work on Tyo’s grad dress. She didn’t even get her onesie yet (I know, major mommy fail.) and here I am working on another big project for her sister? (To be fair, Tyo doesn’t wear leggings or most of the other quickie-type makes that Syo benefits from, so over the course of a year it really evens out. Somehow this does not satisfy either of them.)

This little birthday suit (haha) doesn’t really make up for it, but maybe it’s a start. I took the day of Syo’s birthday off work (calloo callay!), and asked what she would like to do. 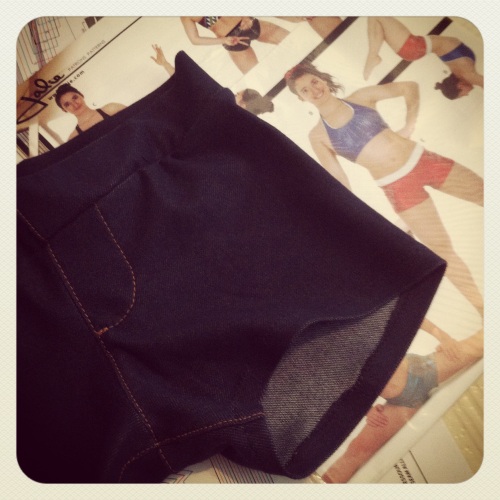 Since she knows me, she suggested I/we make her something. We spent most of the morning digging through my horrifically disorganized stash, and eventually settled on some denim knit remnants for the fabric, and Jalie 3247 for the pattern. I’m also planning (hoping) to make her a swimsuit with this pattern, but on this given day (which was, after all, her day) she wanted shorts and a sports bra.

We’ll start with the shorts, because I did make them first. I made the size 10 (N), the only alteration to make the back rise a teeny bit higher. I just added on at the top, but I think my usual Jalie alteration—adding a little wedge to the CB curve—would’ve been better, even if it’s a bit of a pain in a pattern with no side pieces.

Because we were using a denim knit (left over from the jeggings), and because Syo has no concept that leggings are not pants (one I struggle with myself, I confess.), I figured some topstitching was in order. There’s also an underlay below the mock fly, just like on my jeggings, which gives this bit a bit more substance. I used Gutermann jeans thread, a narrow zig-zag, and a long stitch. It’s not quite stretchy enough for around the leg, I thought, but should be fine for the vertical seams. I didn’t go as far as to add pockets, however.

If it looks like the binding is a slightly different colour, that’s because it is. I had only the teeniest scrap of the darker blue denim knit left (hence the centre-front seam, too), so I had to use my other jegging knit for the back and bindings. I don’t think it’s super noticeable in real life. I actually had to cut the two halves of the front on the diagonal to make them fit, and because the denim knit has a bit of a twill-looking thing going on, one of them actually has its twill “rib”, that usually goes diagonally across the fabric, going straight up and down. The other has it going roughly the opposite way. Not perfect. Although the stretch and everything is just fine, so I’ll be grateful for that at least.

Syo picked the view with the criss-crossy spaghettie straps at the back. It is the most exciting view, I will admit. The pattern suggests you make skinny straps and turn them (with a bobby pin! GO JALIE!), but I made these the same way I make belt-loops for jeans, only skinnier—serge the edges, fold under, and topstitch. At this width the serging actually made it much easier to get the folding evenly, although having both edges serged also added some bulk. I wish I had thought to inter-weave the straps at the back where they criss-cross but I didn’t. Next time. 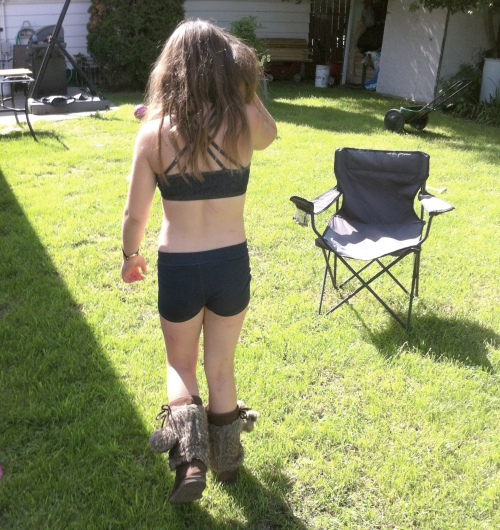 As with the jeggings before them, getting good photos of this little outfit was not easy. Every photo here had to be lightened to get any kind of visibility, hence the washed out grass above. 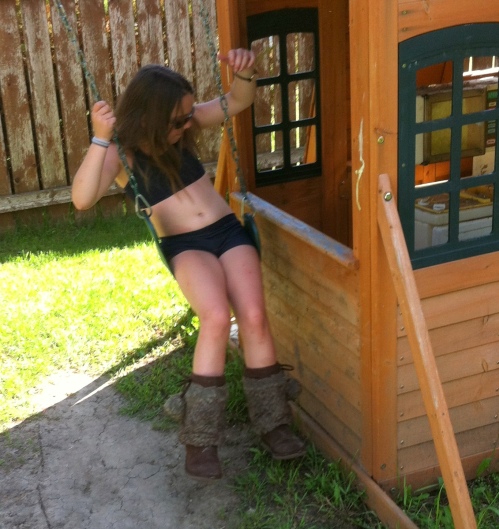 Especially on a child who will only give you action shots.

6 responses to “And something for Syo”