It occurs to me that putting “climax” in a post title may not be the wisest decision ever… oh, well.

You remember my red clovers? No? Maybe that’s because they’ve been languishing in dreaded UFO limbo since, oh, January. I don’t do UFOs, peeps. I don’t always like what I make, but I almost always finish it.

Having cleared (or partially cleared) my sewing room of some backlog clutter on Monday, I was feeling inclined to tackle other energy-blocking projects (I even vacuumed the basement carpet, dammit. Of course, then I spread out and cut a bunch more fabric, but that’s beside the point.) So last night after dinner I picked up my Clovers from their sad little heap and set to work.

My main blockage was the zipper. I had settled on a lapped zipper for the final application (why, I don’t know, since I suck at lapped zips), but when stitching it up (after LOTS of hand basting, something I almost never do) I realized that my ends weren’t lining up with the top of the waistband on one side, and I chucked it in a corner put it away in disgust.

So, last night, I pulled the zipper out, examined the waistband and determined that one side was actually too wide, fixed that, and then set about hand-basting everything back in. Peeps, this zip is inserted almost entirely by hand. Probably not a good idea for a load-bearing area, but anyway. It looks mostly nice (a first for me with a lapped zip) except at the very bottom. Aside from the fact that the side of the hip is not a really good place for a lapped zipper—the over-lap seems to want to gape out a bit. The entire thing would’ve been considerably less brain-breaking if I’d made it more like a typical fly, with the waistband not included in the zipper, but that would’ve required a bit of extension of the waistband pattern, which I hadn’t done. So I made it work. The top of the zip has a wide pants-hook, but I couldn’t find a bar for it so I made a thread bar. I don’t really expect that to hold up, but it’s functional for now.

And then I hemmed, and now they’re done.

The problem is, I’m not sure if there’s an actual problem, or if I just don’t like side-zip, no-pocket, non-jeans-style pants. For one thing, I obviously need different underwear with them. 😛

The side-seams are still a bit ripply. The waistband wants to sag down  in the front—it’s still a smidge higher than my “natural waistband groove”, despite me lowering it a good inch. I think this contributes to the wrinkling along the hip, not to mention the front-crotch wrinkles. I’d be tempted to take in the hips and thighs a bit more except it’s pretty much impossible to alter that side-zip. Well, without wanting to kill myself. 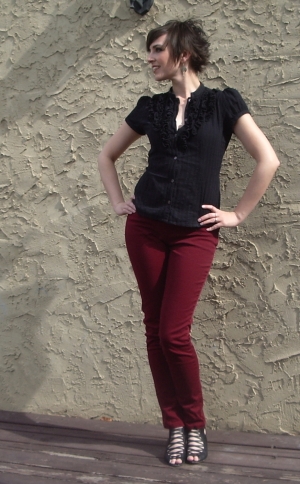 The calf is more snug than the thighs, which I think is also bothering me. Not a surprise—I have pretty muscular calves, and have run into this issue in storebought skinny pants. Although for some reason my feet and lower legs look tiny in these photos. Maybe it’s the wedges?

Probably I should add belt-loops and wear them with a belt and see if I like them better with the top held firmly in place. I interfaced the waistband with knit interfacing to retain a bit of the stretch, but if I want to wear them sans belt, I think that removing all stretch would’ve been a good idea. At the time I was paranoid about the whole thing being too small. Also it would mitigate the serious plumber’s crack that happens when I bend over.

Currently I’ve hemmed them full length (I added about 5″ to the pattern). I’m tempted to shorten them (though the picture doesn’t show the short look nearly as well as I hoped it would). I like the shorter look, but I feel like that would really limit their use in my wardrobe. I don’t usually go sock-free until the height of summer, and I don’t think the pedal-pusher look works with much but sandals, at least for me.

But am I going to wear them much anyway?

Why didn’t I just make this fabric into jeans? I really want red jeans…