A further invocation of spring 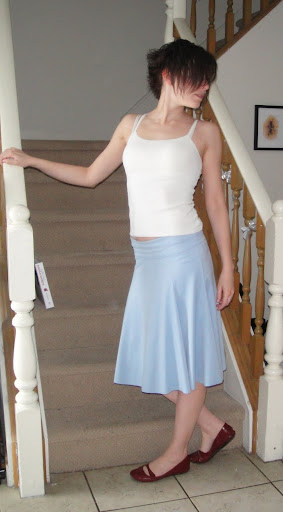 Since the first one worked so well. Well, it did—the temperatures I’m complaining about right now are a full 20° C warmer than the ones I was complaining about at the beginning of the month. It’s still snowing, however.

This fabric was snatched up in the frenzy of stash-building earlier this month when I discovered Fabricland had actually put some decent knits in their clearance section. Mainly I like the colour, but it also has an interesting sueded surface and a moderate stretch. It seemed a little heavy and so was passed over during the Great Cowl Experiment (which Sigrid’s versions are making me ache to revisit, by the way…), but I thought it would be great for a springy little skirt.

My first thought was a half-circle like Hip Dropped Stitches’ gorgeous one, but I was concerned that the nap running in different directions might end up looking odd (I can’t tell if there is a direction, but if I pretend there isn’t, you know I’ll find out there is when I photograph the skirt.)

My next thought was a mermaid skirt. I’ve been wanting a little, flared, gored skirt since… well, aside from always liking them, Loutracey posted this one lots back in Self-Stitched September, and then Big in Japan copied this one, and then most recently Yoshimi unveiled this gorgeous (red!) version. Yum, yum YUM. 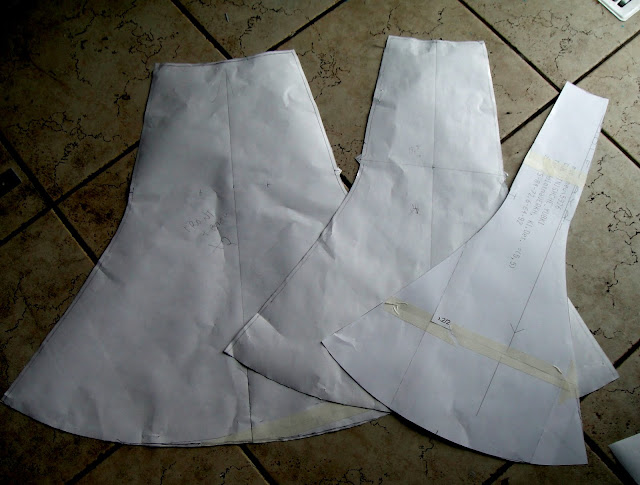 What flummoxed me for the longest time was a pattern. Obviously a straight gored skirt would be easy to draft (bum-fitting aside), but I wanted something with a graceful curve hugging the hips and then flaring out below. This would take a bit more thought. And of course, going out and buying a pattern would be too easy. Lekala had a couple of versions I considered, but the one had too many panels (a 10-gore skirt, in fact) and looked too long (which is SO weird, because if you look at their artist’s rendering, the skirt comes to below the knee. The pattern piece is only 22″ long, people, and the waistband’s not that wide either. I mean, I know I have long legs, but not that long.), and the other one, while lovely, seemed to have a bit too much flare. I wanted the skirt to bell out, but not be a circle dropped to my hips.  (I can’t believe I just admitted that a skirt can be too full. That’s like saying pants can be… too long. Or that the Blondissima got your hair too blonde). 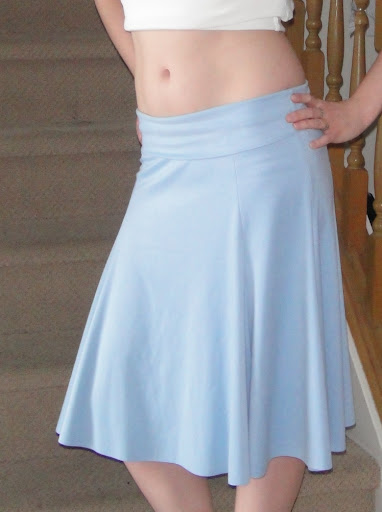 Anyway, when this fabric came along and the idea crystallized, I went back to the Lekala patterns, thinking I could probably make one work. I knew the length I wanted (just above knee), and that I wanted a six-gore skirt with wider CF and CB panels and narrower panels at the sides.

So I revisited the Lekala patterns, and eventually printed off Lekala 5826, mainly because it required less paper. Man was that a tiny pattern piece! Comparatively, anyway.

So, I had the pattern piece for a 10-gore skirt that was designed to fit me (or rather, someone with hips my size but a “normal” waist) at the natural waist. What I wanted was a 6 gore skirt that sat lower on my hips, with wider front and back panels. It was time to get creative.

Some quick measuring informed me that if the pattern piece as is were used to make a 12-gore, rather than a 10-gore, skirt, it would have pretty much exactly the “waist” measurement I was looking for. The length and flare still seemed good—it would be a very short skirt if worn at the true waist. Furthermore, a 12-gore arrangement is much easier to convert to the uneven panels I wanted—I could make the CF and CB panels the width of 3 original gores, and the side panels the width of 2 original gores. Perfect! I checked the amount of stretch on my fabric, to make sure I didn’t need to subtract ease, and got tracing. I used the highly scientific method of tracing the pattern piece, then sliding it over so the waist and hip notches lined up and tracing the other side. Aside from running off my paper and having to piece in a bit at the hem, it worked really well, although I can’t swear there isn’t a bit of flattening along the hem curve on the 3-times-wide panel.

So, I had my pattern. Time to lay it out. 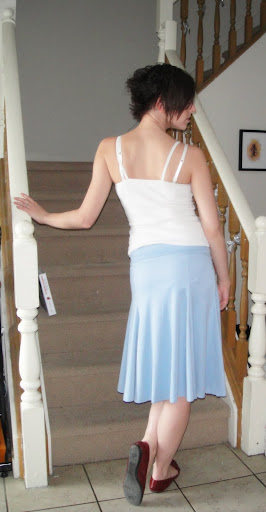 Blerg. Now I remember the second reason I had hesitated making one of these things—man are they wasteful of fabric! Especially since I couldn’t reverse any of the pieces due to nap-related fears. This little, itty bitty, not-even-knee-length skirt used up my full two metres of fabric, with barely enough left over for the wide, fold-over waistband I wanted. Of course there are plenty of (rather large) scraps… but seriously! I could probably have gotten two shirts out of that thing! As it is, maybe the scraps will be large enough to play with glovemaking… faux-suede sky-blue gloves would be lovely, don’t you think?

It was pretty quick to sew up, although I did inevitably serge the two wide panels together almost right off the bat. I don’t pick out serged seams, so I just cut that seam off. As it turned out (due to that magic of stretch fabric, even when it didn’t seem overly stretchy when tested) the skirt needed a fair bit of taking in anyway so it wasn’t a problem. I took a couple of cm off each seam, and then took the two side seams in another inch or so. 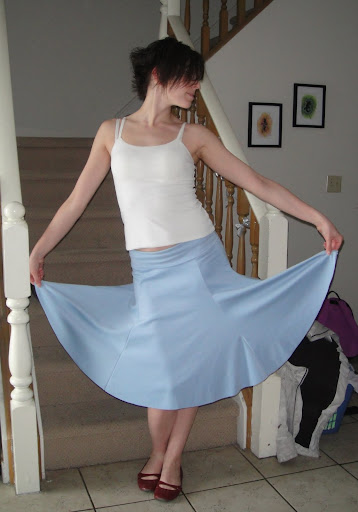 The waistband is a wide rectangle folded over and applied exactly as the neckband in this tutorial.; I determined the length by wrapping the piece around my hips until it seemed like it was a good tightness. This wound up being a smidge smaller than the skirt opening after I’d taken it in, which seems about right. I didn’t have enough clear elastic to include it in the waist seam… we’ll see if I regret that in the future. Since the skirt’s absolutely the same front or back, whereas I am not, it has the potential to ride up in the back, but if I fold the waistband properly I can prevent that. If the problem persists I can always trim it at the front later; I didn’t do a hem, just trimmed the bottom edge smooth by running through my serger without thread.

It actually turned out quite a bit longer than I had thought it would—it’s hovering just below knee length where I was expecting it to be above. I guess that has to do with adding the waistband and where it sits on my hips, and the fact that there’s no need to take up a hem… anyway, I like it very much, although I’m going to have to figure out what it works with other than just tank-tops. It’s lean enough on the bottom that any puff on top—like the puffed sleeves on my JJs or a cowl neck on a shirt—makes me feel top-heavy, so we’ll see. I may have to make a shorter version in the future, though, out of a less drapy fabric to see more of the “mermaid” shape.

I do like the blue with my red shoes!

(But for now, since it is still snowing, I’m going to put my sweater back on!)

23 responses to “A further invocation of spring”