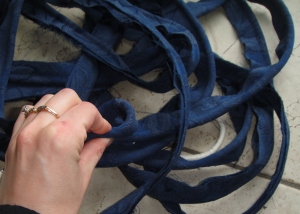 Why yes, that is eight yards of jumbo piping...

My sewing machine is pretty basic, a three-and-a-half-year-old bottom end Janome; she’s mostly pretty reliable, if not terribly fancy, and at this point we pretty much understand each other.

But every once in a while, she really annoys me.

Yes, my friends. I am undertaking … shudder… home-dec sewing.

And not even for my home. I’m making a custom cushion and cover for a friend’s window-seat. Technically this is an exchange of labour since she did a wonderful photo shoot for my kids before Christmas with her fantabulous DSLR (she’s one of those hobby photographers) that also gave my a chance to play with RAW images… soooooo fun…. ahem. Anyway, so I’m making her this cushion. Which I’ve been dawdling over for most of the month because, well, it’s home-dec sewing, and why would I do that when I could make whimsical costume jackets? But she came over for tea on the weekend and I wanted to have something to show her, so I spent some time Sunday morning cutting out rectangles… endless rectangles… and then I figured I should at least sew up the piping before I lose those long, skinny strips.

At this point I’ve made lots of little, garment-sized piping on my machine with nary a problem. But this jumbo, mega-sized piping is, well, a wee bit trickier. You see, it doesn’t slide under the “high” side of the zipper foot at all. It has to pass to the right of the whole zipper foot apparatus. And because I can’t adjust my needle position to the right, I could not run my stitching nearly as close to the cord as I would’ve liked. People, I have saggy piping. 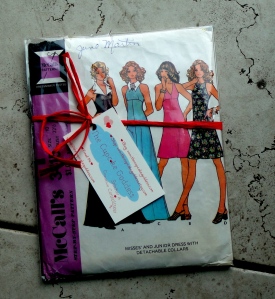 Man, I love these dresses...

Even more annoying, I know I’m going to have the exact same issue sewing it to the pillow cover itself. Grrr-grr.

Can’t I make something nice and easy, like a jacket?

Or how about another 70s maxi dress? This one arrived today, courtesy of the Cupcake Goddess’s pattern sale the other week. Num, num. It’s a misses’ size 10, which will be interesting—in the past I’ve usually used 12s and had to take them in a bit, but theoretically the 10 will be perfect in the bust. I’m particularly in love with the blue version, although the rational part of my mind is telling me that collar is a bad idea…

is a particularly blah combination of repeat outfit (see day 6) with no hair/makeup.  I had hoped to make it through the month without a precise repeat, but I was too lazy to check this morning to see if I’d worn this exact shirt with these exact pants before, and now that I realize I have, I’m too lazy to change. Meh. I think I’ll be back to regular life tomorrow, though, so I’ll try and make more of an effort then…

Tagged as 70s, home-dec sewing, too much talk, whining