The (not so) Big Reveal

Ah, the Danielle Dress in all its glory! Oh happy day! Of course you’ve already seen photos of the dress with everything but the final hem, so it won’t be that huge of a deal. Ah well.

It has taken a LONG time to get this post up, due to lack of awesome pictures worthy of this awesome dress. Lots of fuzzy ones, ones that don’t show the hem, ones where I’m making a wonky face… you get the idea. These still aren’t them, but they’ll have to do for now. My usual photographer (AKA daughter) is spending the month with her cousins!

It occurs to me that this is my first fully-lined dress. Also my first “everyday” (as opposed to costume) dress.

A quick recap on the construction… the fashion fabric is some kind of crinkly chiffon (possibly crepe?),

very thin, in a bold black and white print (I don’t usually go for prints) that has been in my stash for at least five years, since I made a tiered dance skirt for my older daughter out of it.  I underlined it with a plain black cotton (from my old duvet cover, the same stuff I used to underline my girls’ coats) to give it a bit more body, and lined it with a very plain, very cheap black lining fabric. While I cutting I committed the major sin of not cutting the centre front on the fold, so I had to improvise and add a third pleat and centre front with a black inset of the same fabric as the “waist” band. Since I now had a seam allowance at the centre front, this meant I had to fiddle with the other pleats a bit to maintain the skirt width, but I think it worked out all right.

To keep the chiffon (which was a b*tch to cut out, by the way) from sliding around on the underlining, I

hand-basted all the pieces of the shell together. This was probably the single most time-consuming part of constructing the entire dress. On the other hand, it was handwork, so I could do it in the livingroom with the family instead of ditching them to sew, so I get less (though not no) hassle for it, and not once during the actual construction did I want to shoot myself in the head due to my slippery, misshapen chiffon fabric pieces, as I usually do when working with this kind of fabric.)

My cutting wasn’t as precise as I would like (as usual), partly due to the chiffon, partly due to sloppiness. Precise cutting is definitely one of my Areas to Improve, although I’d like to say this dress was quite a bit worse in that department than most of my recent efforts. Cotton and denim (which is of course cotton too) are really dreams to cut out. My biggest goal was to get the front pleats to line up with the front darts (and to not totally ruin the darts). I was not 100% successful, but managed adequately. The darts are at least more symmetrical than most of my previous attempts, though I’m still not 100% happy with them, either.

The lining was fairly rushed and fudgetastic. I didn’t do a separate waistband for it (I meant to make the skirt longer to compensate, but didn’t, but due to sloppy/generous cutting of length this didn’t actually matter. My goal was to make the lining slightly smaller, which I achieved a little too well, but at least my zipper doesn’t get caught in its fabric (!) and the outer shell doesn’t look strained.

I didn’t want to finish the arm-holes by hand, so I wound up releasing my shoulder seams so I could machine-stitch the lining to

Hand-finished hem---the large stitches you see are actually the hand-basting I neglected to remove since it was on the inside. You don't see ANY of the actual hem stitches.

the arms and neck and then reverse it, then hand-finished the shoulder seams. This is easy, but somehow when I do this the shoulder seams never match up as nicely as they ought to… the front is always a little too narrow for some reason. There’s probably a better method out there, but I’m too lazy to research is right now.

The zipper was a bit of an experiment. I’ve read the standard method for inserting them (and this was a standard, not an invisible zipper), but I’ve never had great success in this department. Usually they end up catching on the fabric around them, at least a bit. I was attracted by the idea of installing it by hand, but also short of time. In the end I sewed it to the lining by machine (carefully well back of the zipper teeth) and then picked it to the outside by hand. It looks great, at least on the outside. My hand stitches show on the inside (perhaps with a little more thought or paying more attention to some tutorials, I could have avoided this, but I was in a rush at this point). I also finished the hem by hand, which is lovely when you have an underlining to catch the stitches on, and I’m quite happy with that,

though there is one spot where I accidentally caught the fashion fabric and it shows. I could fix it, but I probably won’t bother. I just hemmed the lining by machine. I really should pick up some finer machine needles… the ones I have are a bit too thick and the lining fabric puckers.

On the whole, the dress was a smashing success. It fitted well with minor alterations (though the bust is still a bit generous for me… I suspect I need to narrow the front and then make the darts smaller). I did end up taking it in almost an inch on each side at the back seam, so perhaps I could have cut the size 34 instead of the size 36. The only disappointment? I it’s a bit too fancy for everyday, and who knows when I’ll get to wear it again? 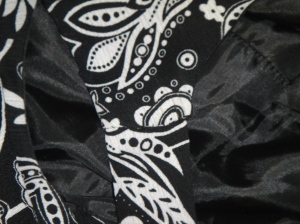 Shoulder seam---not a great match up.

Tagged as Danielle, dress, finished projects, too much talk

6 responses to “The (not so) Big Reveal”