Okay, why is it so hard to get good Hallowe’en photos? every year I vow that I will, and every year I end up with a couple of fuzzy shots of kids running away to the next house while trick-or-treating. >_< 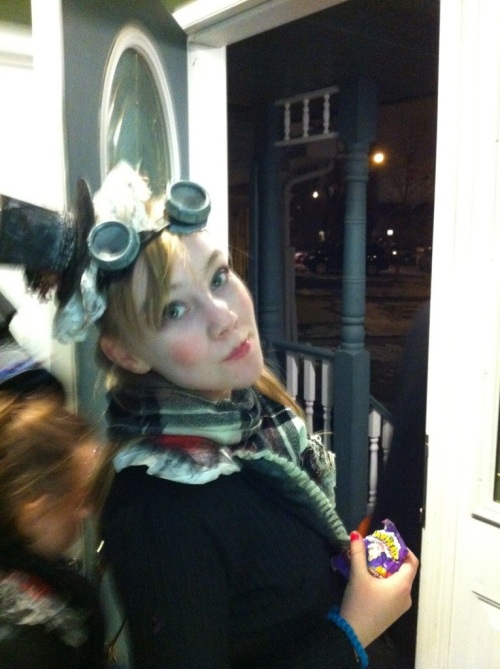 Anyway, I’d say the Steampunk costumes were a success, at least as costumes. As costumes for Hallowe’en in Saskatchewan… not so much. I think the last several years in balmy southern Alberta kind of messed with my head in the Hallowe’en-costume-planning department. Note To Tanit: Saskatchewan Hallowe’en costumes should be: showing NO skin, ideally can cover a snow suit. Scarves are a bonus.

It took me the better part of a month to work up the energy to wrangle the girls back into costume (and makeup), and at this point I’m really too tired of all of it to do much introspection. Which is too bad, because there’s probably a fair bit left to say, if only about the jackets.

Yes, so late the Christmas tree is already up.
(Note—I didn’t put the tree up.)

OK, I know you pretty much saw that one already. Anyway, prepare for pretty much a photo essay, with minimal commentary.

Tyo, giving me crap for taking the photos so late.

Pocket watches were an important elements of the costumes.

A long-awaited closeup of Syo’s hat

I must confess, I think Syo’s hat with the painted holly berries actually crosses the seasons nicely. 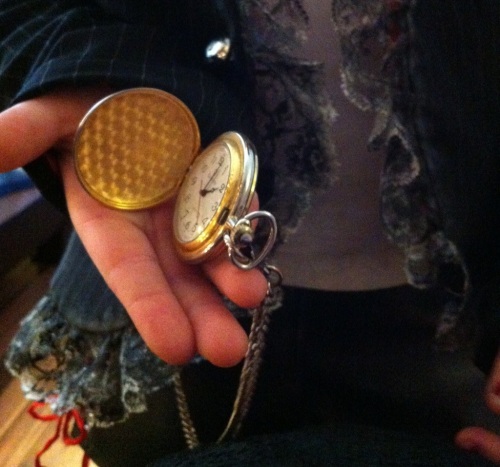 Syo’s pocketwatch. All pocketwatches courtesy of my mother. (Without whom these costumes really wouldn’t have happened, I think.)

The tailcoats were adapted from the much-maligned McCall’s 5312.  Originally Syo didn’t want one, but it turned out the size 10 was too small for Tyo, and Syo consented to wear it (thankfully, as she would’ve been even colder than she was already without it). She’s been wearing it at least weekly since, so I think that’s a win. 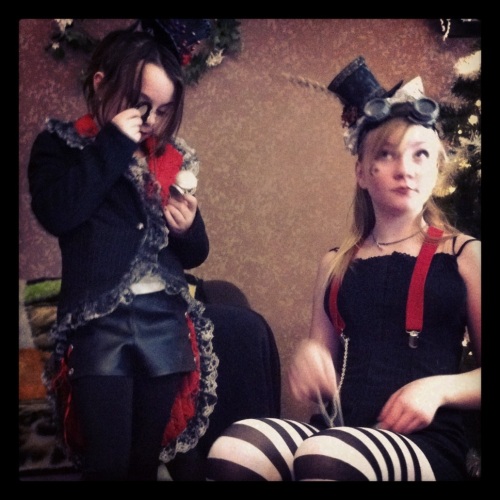 Syo requested an internal pocket for her pocketwatch. Tyo didn’t, but I should’ve included one anyway. Oops.

Syo’s monocle actually turned out really cool (and had an actual magnifying lens, too). It’s made from an old earring and some kind of jeweller’s loupe. Unfortunately it spent the entire actual Hallowe’en tucked in a pocket with the pocketwatch.

I had a lot of fun painting the jackets with black, brown, and silver. Why? Well, mostly because. Also, it was fun. I lined the jackets with this fun printed quilted lining fabric I picked up at Value Village on a whim sometime last spring—it was one of those things I really wasn’t sure I should ever have bought, since it’s right on the border between awesome (a cool print) and horrible (quilted lining is one of those things I generally loathe). However, it really came into its own here, I think—giving body to the  wimpy suiting fabric I was using for the shells, and adding much-needed warmth. Seriously, I can’t believe how long my kids wore these outside. It was -7C, -14C with the wind chill, and we were out for almost three hours, with only a couple of warm-up stops.

Jackets. Also, I want to eat your brains. But your hat first.

My mom generously gave us a bag of old stenciling supplies a week or two before Hallowe’en, including a lovely, delicate rose stencil. I couldn’t resist adding it to the coats in a couple of places. I just used the same acrylic paint I used on the rest of the coats. I don’t particularly expect a lot from this down the road, but it served the purpose at the time.

I think that’s about enough. I added length to the sleeves of the coats, and the tails, of course. I think I didn’t get the button positioning quite right, as the lapels (which I interfaced) rolled nicely but sat better before I put the buttons on.

And now, on to more recent things. I have a backlog building up, as those (few) of you following on twitter or instagram probably know already…