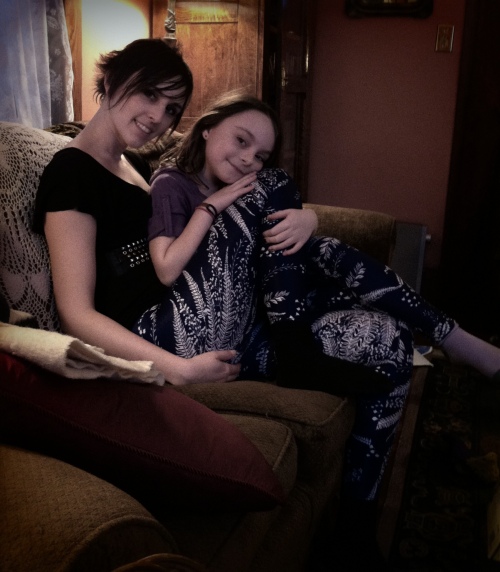 A little while back, I was bemoaning the dearth of fun woolly tights, both in my wardrobe and in the world in general. Several people reminded me that funky leggings could probably suffice, in a pinch, and reminded me of Oona’s prowess in this department.

Well, this idea niggled and wriggled, and the next thing I know I’ve traced out an old Kwik Sew leggings pattern (adding a snotload of length and shortening the rise in front only) and I’m diving through my stash for anything resembling funky knits. Keep in mind I rarely wear prints, much less wild and funky ones, and haven’t worn leggings since about 1992.

I eventually hunted up this blue fern frond spandex, probably originally swimsuit material, picked up at Value Village a while back. I had been thinking a stretch cheongsam, but, well, Oonapants called.

No sooner had I finished them, however, Syo (who, as mentioned, is a leggings purist at the moment), required her own pair. This was fairly easy to whip up, and she launched into wearing them with a wild abandon that would do Oona proud. Myself, I’m having a bit more trouble. They don’t coordinate with any of my dresses, most of which are wild and crazy (or just fluffy) enough on their own. Eventually, I figured I could try wearing them with my black tunic (the storebought inspiration for my Ariadne pattern, by the way), but I still feel like my hips need a bit more emphasis, or at least coverage. I feel top-heavy in just the tunic, not my favourite look. 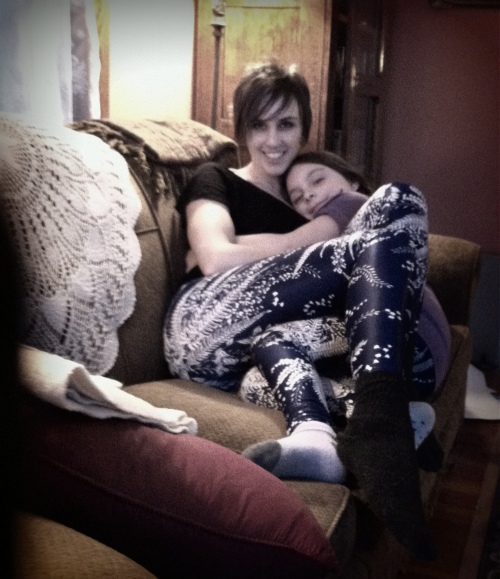 My head filled with the vision of a simple, short-skirted dress in a simple black (stretch) twill. Now THAT I have in stash. Next thing I know, I’m perusing my patterns with a very specific image in my head: a short black sheath dress, preferably with cut-on capped sleeves and princess seams.

Gertie’s wiggle dress. I am lazy so I totally stole Oona’s photo here, too. Click for source

Eventually, I narrowed it down to the Wiggle Dress from Gertie’s New Book For Better Sewing, which I have traced out. But with shorter everything—shorter sleeves, shorter skirt, shorter body. I have traced out the pattern, but I think I had better get back to my long-neglected plaid dress first.

If I don’t get completely distracted by fleece pants in the meantime… (note to self. Must get photos of fleece pants that aren’t grainy and awful.)

Never enough hours in the day

I keep thinking next week, things will slow down. 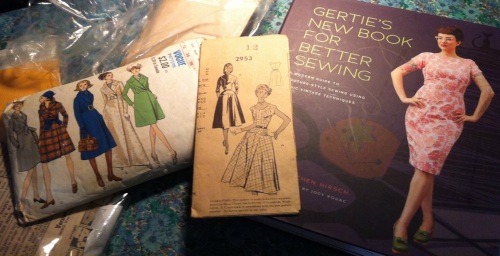 The Top of the Queue

Since my mother has been saying the same thing for as long as I can remember, you’d think that I would have it figured out by now: life never slows down. No?

Anyway, there are three projects vying for brain-space at the top of the queue. I hate having multiple projects on the go, but for better or for worse I’ve made baby steps towards all of these.

First up is this vintage mail-order pattern (undated but my guess is 50s?), which I bought from New Vintage Lady last January. Shortly after Christmas I got ambitious and traced it,  and did a quick muslin of the bodice. It’s about two sizes too small, but actually the only snug part of the muslin was the waist (big surprise). So I think I will make it up as is, with short sleeves, and adding about 1.5cm on each pattern piece at the waist. I want to use this aqua plaid cotton, which I originally bought for the Christmas Dress, but deemed insufficiently Christmassy. It’s perfect for the fun grain-playing in this dress. The skirt will need to be a good bit shorter, too. Speaking of vintage details, it calls for a snap placket at the side seam.

Moving on, the dearth of warm tights in my winter wardrobe led to a wild urge to create some awesome Oonapants for myself. Unfortunately (or fortunately), my sensible side pointed out that I have nothing at all in my wardrobe I’d be inclined to wear with Oonapants, not being quite as wild and smashing as the Kalkatroonan herself. Obviously I needed a cute little black dress to showcase my crazy (future) tights. This had me pawing through my patterns feverishly for several hours before settling on the wiggle dress from Gertie’s book, (only shorter) which I bought back in the fall but haven’t actually used yet.* I have a lightweight black stretch twill that would be perfect, as well. It’s traced out and I had pulled out fabric for a muslin as well, but haven’t made it yet. I’m not allowed to buy any crazy jersey for more leggings until it’s made, though.

And then, the twitter stitchers got going on the coats. I knew there was a reason I stayed away from Twitter for so long…  😉 And Oona (always the troublemaker) #sewingdared me to make a coat. And the next thing I know there’s a hashtag, #sewcoatbuddy, and, well, what to do but pull out the pieces of Vogue 7448, originally made up by Zoe of So, Zo, What do you know?. Which was probably the coolest giveaway I’ve ever gotten. I’ve had the fabric since last year, but finally got lining and interlining just after Christmas. So I guess I need to get moving on that, too, before I run out of winter. Although winter feels pretty endless here right now… 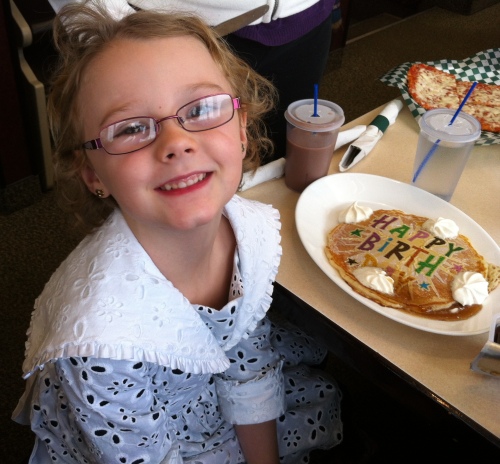 I didn’t manage to get a lot of good shots of Fyon’s birthday dress… but it was well received, even if it isn’t QUITE the cutest thing I’ve ever sewed her. I do have to make a fluffy dress for her little sister, the Waif, now, though…

And I still need a new pair of fleece pants. But that’s a story for another day…

*If I had anything like the brain-space for making resolutions this year, I think I’d resolve to actually USE some of those pattern books I keep buying. I have the Colette book, Gertie’s book, Drape Drape 2, and got a few more for Christmas!