The Blazer of Awesome

I am (as my husband will assure you), one of the world’s champion procrastinators. It’s a major handicap, actually. But this jacket fix represents a level of procrastination rarely met even by me.

I got this little grey blazer in high school, ladies and gents, which was not that long ago after all, from my old standby Value Village. The fit was, and is, astounding—perfect shoulders, perfect waist length (no swayback issues!)… Great.

Except. The more I wore it, the more creepingly aware I became of the one, glaring, unforgivable flaw.

You guessed it. The sleeves are too short. (I need some kind of “ba-dum-dum” sound effect every time I say that. 😛 Or maybe a laugh-track.) 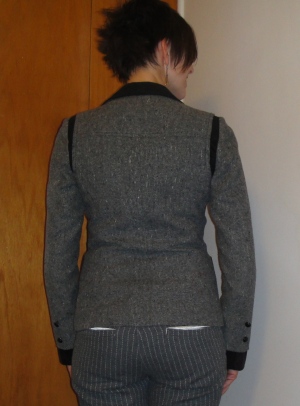 Back—OK, maybe not quite as perfect as I thought (or it used to be 😉 ). Still pretty damn good.

Not too long after graduation, the frequency of its appearance in my regular wardrobe rotation dropped dramatically. I am really not fond of the cold wrists >_<. But still I couldn’t give up on it entirely. Everything else was too perfect. So it hung in the back of the closet, making me sigh with occasional wistfulness.

About four years ago, I found a black corduroy curtain abandoned in the lobby of our apartment complex (these occasional windfalls are the only thing I miss about apartment living. Well, that and the endless hot water.) I bundled it home, and soon realized that the wale width and texture was a perfect match for the details on my poor jacket. And since the jacket had plenty of other black cord details, why not cuffs as well?

Nonetheless, four years passed. The corduroy curtain served many purposes, most of them involving taking up space in my closets, but never became part of a blazer.

Well, finally today the prospect of a quasi-job-interview prodded me to haul out something approaching office attire—the businesswoman suit. By some miracle (probably as a way of displacing some intense anxiety), I motivated myself to find the curtain, locate the portion where the fading of the blacks matched best, and cut out two plain cord rectangles. I interfaced them with Armoweft, stitched into tubes and folded them in half, and tacked the resulting tubes inside the ends of the sleeves. Voila, stupid simple cuffs. Total time, probably about 30 minutes, plus time to dig out the fabric from the garage.

Because I enjoy a bit of a tailoring dissection, here’s some closeups on the jacket itself. Fortunately, the lining is loose, not bagged, so I could flip it up and gawk at the insides. 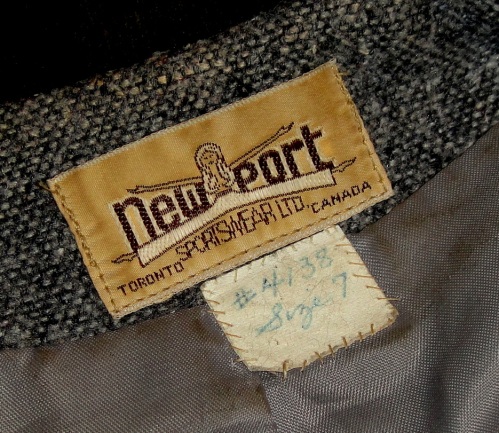 The label is “Newport Sportswear Ltd” from Toronto, Canada. The jacket is #4138, and a size 7, according to the hand-written label. Google did not give me much (any) info about this brand, aside from some Etsy listings for vintage clothes. I had never really thought about the vintage of this jacket, but it’s certainly not a typical fit for the 80s or the 90s (remembering I got it in the latter part of the 90s). The rather flexible lady certainly has the hair to be 70s. 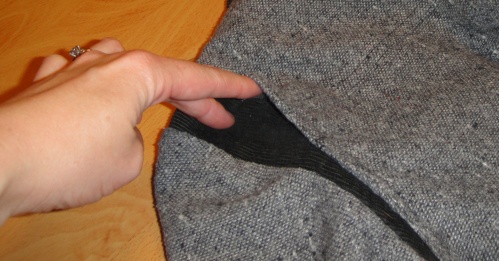 My favourite feature by far is this little corduroy insert on the back shoulder, which greatly increases the range of motion, otherwise the blazer would be way tight. According to Allison of A Fabric Fixation, this kind of feature is called a bi-swing back. (My motorcycle jacket has one as well, which makes sense.)

This is what it looks like from the inside—it forms a little folded pocket or pleat. The shape is a bit more complex than it looks on the surface! 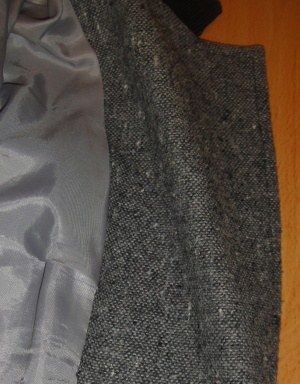 Lapel fold and pleat in lining at bust. (Sherry had us ease this in.)

Other little details? Well, the “tailoring” and construction is virtually identical to what Sherry went over in her RTW sewalong, which is to say it’s distinctly tailored but not heavily or intricately so. If this IS a 70s jacket, it’s also a testament to the powers of early fusibles, because everything’s still perfectly in its place.

The shoulder pad is very thin, two layers of felt, but it does the job. I had taken some photos of the buttonholes (machine) and collar interior, but really they didn’t turn out terribly informative, so I’ll spare you them, and just repeat how much I love this jacket.

Especially now that, fourteen or fifteen years into owning it, the sleeves are finally long enough. And it doesn’t even look funny!

Tagged as alteration, blazer, Newport Sportswear, tailor, too much talk 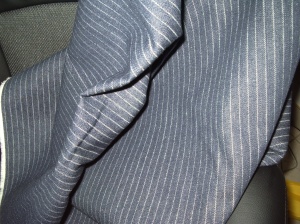 It’s a lovely, heavy-weight striped denim. The colour in the photo is crappy—it’s a fairly standard dark-wash indigo between the lighter stripes. I was not bad—a co-worker gave it to me. Cool! It’s not stretch, so it can’t become my next pair of Jalies (too bad, really). I’ve been dreaming of jean-jackets, but aside from lacking a pattern, it’s a little too gorgeous for a casual, slouchy kid jacket (and I already have a perfectly good jean-jacket for myself).

Skirt? tailored blazer out of denim? (that would be nifty, actually… especially with some edges left raw? hmm. It’s only 1.5 m long, but it’s really wide so there’s actually a lot of fabric. Enough extra for a pencil skirt?)

Today I bought fabric. Not randomly, I might add—ok, mostly not randomly. I could have bought MUCH more, especially since somebody appears to have donated an entire stash to my (usually lame) local Value Village recently. But I was restrained. Especially after I found out about the $500 vehicle tune-up we have to pay for tomorrow. Oopsie.

Anyway, although I could cheerfully have bought much more, especially at Value Village, I was comparatively restrained. I bought a black cotton with a bit of a woven-in stripe. I probably don’t need four metres of it… but on the other hand I know I will use it, here and there, sooner or later. And won’t it make the CUTEST JJ? Also I have plans of a Danielle dress with this and some horrendous black-and-white pattern synthetic I bought years ago… but more on that later.

Giving in to the Jalie jeans pattern that has been sitting, traced out, silently calling my name, I also

Stretch denim... blackish with a bit of vertical stripe

bought 3 metres of this stretch denim; it’s black with a subtle vertical striping effect. Fabricland had exactly three kinds of stretch denim (that I could find) and this was the only one that wasn’t $18/m. (Now… if I get to the point where I can put together a top-notch, kick-ass jean, $18/m is still less than $40 for a pair of jeans and thus roughly half the cost of the jeans I typically buy, even allowing for notions. But for a first go… this stuff came to about $8/m, which is at least halfway bearable if I create a complete wadder. Of course, when I checked the stretch, instead of the 20% Jalie recommends, it’s more like 30 or 40%… so I went and retraced the pattern a size smaller. I bought three metres (what was left on the bolt)… I’m hoping it will be enough for a set of capris (the trial run) and a full-length, but we’ll see. If not I’ll get a couple of pairs of capris for the summer and my oldest daughter will get the jeans she’s been asking for. 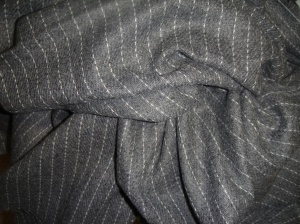 Then we went to VV and I picked up this grey wool… three metres for $10; I know, not a real steal thrift-store wise, but VV seems to get by on “prices just a little bit better than Walmart” /sigh. I could’ve bought a lot more, too… someone must’ve donated a fabric stash recently because there was a TON of fabrics, some of them very nice. Unfortunately my hubby called with the news about the vehicle repair halfway through my shopping excursion, so I restrained myself to just this wool. Can’t you see a nice blazer out of it? heck, it could even have a matching pencil skirt if I got really ambitious. (Would I WEAR a pencil skirt? this is my dilemma.)

… I need another project to obsess over. I’ve said I don’t much care for vintage fashions. This is not strictly true… I just generally can’t see myself wearing (or looking good) in most of them (without serious corsetry, which I’m not into. Not that I can’t rock a boned bodice, I have several, but I’m not thrilled with the feel of tight-lacing when I have tried it, and my broad ribcage and short waist don’t  reduce particularly well anyway), and the whole point of this current push is to get me sewing STUFF I WILL WEAR as opposed to my usual costume indulgences.

But I certainly like *looking* at the older patterns, especially the really old. And yesterday I stumbled upon this jacket. Now, I’m not really interested in the pattern itself (see remarks about corsetry above), but look at at: round, stand-up collar, princess-seam jacket with narrow sleeves and just a bit of puff at the top. Where have we seen that before, folks? HERE of course! Now wouldn’t this hip-length version of the coat be awesome with that kind of bottom pleat-detailing added? I still can’t really see myself actually wearing this fabric, but it would be perfect for trying out the look. Things I love about the bottom of this jacket:

So… I would need to figure out:

Probably this kind of pleating would be better in a lighter fabric (like a canvas or suiting) rather than my wool, but whatever. I can topstitch the pleats if necessary (assuming I even have enough fabric left over for the pleated section). Anyway, what fun. 🙂 (On a side note, on re-trying my coat muslin, I think I want to shorten the bodice above the bust (so in the armscye) about an inch. This will raise that droopy bust-line, put the waist in a better spot (I really am short-waisted, aren’t I?), and reduce the droopy armpit the pattern has. All in all, I like).

I’m going out of town tomorrow, and am still (ok, perpetually) broke, so I won’t be doing a whole lot of sewing for a while, but a girl can dream, right? I want to make the Burdastyle JJ blouse.

I’m not super-keen on the ruffles, although they are cute and I think it might look a bit bare without them. Mostly I would just really like to have a nice, princess-lined bodice pattern to play with… and the price is right ;). There’s also a variation posted with a bib front that’s cute as well. And when I mess up, it’s not a whole lot of fabric wasted. I am also looking at a lot of blazer patterns. I used to really love a nice, fitted blazer, before the fact that the sleeves are all to short for me really hit home. I really like the Eva blazer, too, but no jackets for me until the winter coat is finished. I’m also beginning to be temped by some of the pants patterns… I am so picky about how my jeans fit… and I pay SO much for them… but what are the odds of my sewing skillz reaching the point where I can actually make jeans that fit me as good as my old Buffalos? Better try a few JJ shirts first and figure out if I really can sew at all, anyway 😉

Tagged as blazer, JJ blouse, plans, too much talk, top