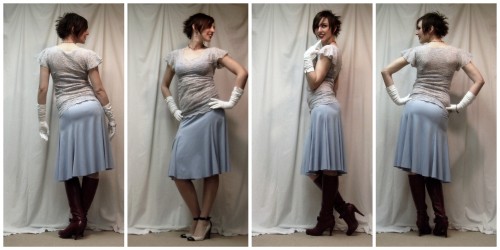 The second, “definitive” version of the Flutter Sleeve Hack has been completed.

It is made, as my husband noted, of the same stretch lace as my Tee-shirt dress last year.

Actually, my dearly beloved man didn’t realize this was a different garment.

Anyway, I’m quite happy with the flutter length and angle etc. I will say that this is not the easiest way to get a flutter sleeve—turning a regular set-in sleeve of a length you like into a flutter is dead easy to get right the first time. On the other hand, this one you don’t need to actually sew on, which is the major win of the BCT pattern all around.

I also quite like how it looks with this knit skirt, which is one of those pieces that, while I love it, doesn’t go with much of anything (except a plain white tank-top). It’s not so much the colour or even style that’s the problem, as the hip-hugging shape; any kind of boxy or detailed top tends to overwhelm it. I feel like I’ve kinda got some vague 20s-vibe going (or maybe that’s just the evening gloves and the shoes).

For the purposes of the photos I was daring and wore the top over my lilac-coloured bra. I think it’s pretty fetching and fairly subtle, but in real life I’ll be wearing the afore-mentioned white tank top underneath. Just saying. I think I prefer the lace with a white underlay anyway—it brightens it up and takes it a little farther from my skin tone.

I did a very simple neckline finish, just zig-zagged some narrow clear elastic to the neckline, folded it under, and topstitched. It turns out I could’ve pulled it a little tighter, but it’s hard to judge on this fabric—the amount of stretch and recovery in the lace is really, um, confusing, somehow.

All in all, this is about as simple and easy as a knit top gets. No hem finishing. No sleeve finishing. Just four seams and the neck-opening.

And that’s all there is to say about that. 🙂

Flutter Fun, and an observation 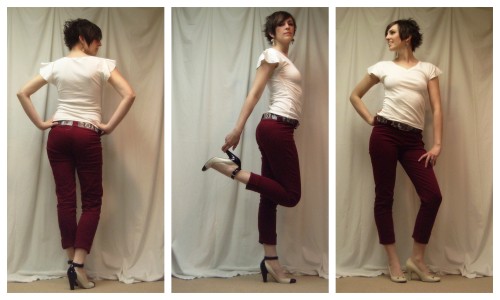 Ever since Steph of 3 Hours Past the Edge of the World first mentioned her plan for a flutter-sleeve hack of her Blank Canvas Tee pattern, I was on board. Totally. For realz. I waited patiently for her to come out with the hack, and read through her tute carefully. 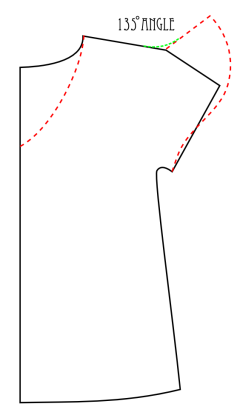 Diagram of my flutter-sleeve pattern changes.

Unfortunately, then I got cold feet. The sleeve looked too short, I thought. I lengthened it, re-drawing the curve, and cut out a trial version in my scrap jersey—the old knit bedsheet I bought at Hallowe’en for making Tyo a shirt. It doesn’t have the best drape, but it was available and cheap and not earmarked for any other projects at the moment. 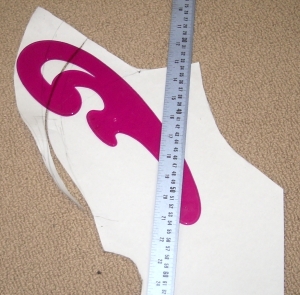 Predictably, the sleeve was too long. I stuck a pin in where I thought it “ought” to go, shortened, and cut again.

Now, I think they’re a bit short, at least at the very top of the shoulder. I actually think my original curve would’ve been pretty much perfect. So there you go. At least the angle seems pretty good.

I paired my trial, not-really-opaque-enough-for-public version of the tee with my red clovers, cuffed to a high-ankle length, for the purposes of the photos. I think I’m liking this length better, and they are *much* more comfortable with belt-loops, although the belt doesn’t help with the front-sag, since the belt wants to sit exactly where the waistband wants to sit. Anyway, we’ll see. The weather is a long way from ready for this look, anyway.

Steph recently came out with the updated and finalized version of her BCT pattern, considerably refined from the early draft I used around Christmastime to make my versions. Curious, I eagerly printed off a new version. And then compared it to my version of the pattern.

The results were very interesting indeed. 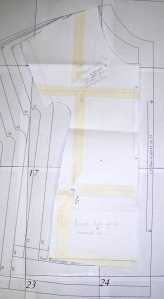 For one thing, the pattern I had printed out (original size 35), whether through some quirk of the early drafting or scanning or my own ineptitude (always a possibility), was considerably smaller than the new size 35. Actually, it’s somewhat smaller than the new size 30 (for a 30″ bust). Which goes a long way towards explaining why my versions of the tee are so, well, fitted.

The shoulders on the old pattern were quite a bit wider (even in my shrunken print-out), as was the neck opening on the back, and the angle from shoulder to sleeve was more extreme. I suspect Steph was bang on in altering those for her new version :).

The original draft was quite short (Steph wears her trousers a lot higher than I do 😉 ) and I had added a lot of length to the bottom. The length of the new, longer draft is pretty much *exactly* the same as my lengthened version of the original. Win!

So, for the moment, I’m gong to keep on working with my old version (as I like how it fits), with maybe a few tweaks around the shoulder. But since I have thrown my versions out there of examples of what you may get from a Blank Canvas Tee, I thought I should also point out that I apparently printed mine considerably smaller than intended. If you want a tee that fits like mine—go down a size. 🙂

Birds on a Wire

Birds on a Wire Tee

So I’ve been promising (well, promising Steph) pictures of this version for ages. I’m not feeling very photogenic lately (never even mind the camera issues)… and my tripod is missing in action, and I’ve been sick, and… well, motivation hasn’t outweighed laziness, is I guess the basic way to put it.

This is, if you don’t instantly recognize it, a dead knockoff of Steph’s original version of her Blank Canvas Tee pattern, including using her very own Bird on a Wire fabric. Which, I feel I should disclose, she sent me as a gift for agreeing to help test the pattern (and advising on electronic drafting, although I turned out to be absolutely useless for that in the end :P). Since I drew her up a little technical drawing for the shirt, I almost feel like I earned it, although maybe I won’t admit how little time that sketch took…

Anyway, thank you, Steph, for both fabric and pattern! 🙂

This is the same pattern I made up before, except I scooped out the neck a couple of inches more—Steph and I share a love of scoop-necks. The length, you’ll recall, is extended, too… I don’t have a long body, but I wear my pants low, so I need my shirts long to cover them. I gather Steph has since tweaked the pattern to make the shoulders a little smaller, something I may follow suit in. The first version I made fit perfectly in the shoulders, but this version, in a knit with a bit more give, is a little large, and I have broad shoulders to begin with.

It’s a good thing I don’t have any navy blue knits in stash, though, or I’d be in the midst of whipping up yet another version, based on Steph’s first official pattern hack—a cute sweetheart-neckline, empire-waist, sailor-buttoned version.

This is my first time sewing with a Spoonflower knit (this is their organic cotton, if memory serves). It’s a nice weight and feels lovely. It does give quite a bit in stitching—I should’ve stabilized the shoulder seams—and the black print has grayed quite a bit even after only a couple of trips through the wash. That being said, you get your own freakin’ custom print. So, er, it’s probably still worth it. But maybe avoid throwing it in the dryer. Be a better person than I am.