It seems to be the season, or perhaps I’ve just reached a certain age. Anyway, I had to make another baby thing. For those of you keeping track, that brings my total of baby clothes ever made up to three items, two of them in the last two weeks.

I had a baby shower to go to. It was Epona’s. Some of you may have picked up on the fact that she’s, well, a bit of a cowgirl (the bit where she wore cowboy boots with her wedding dress might’ve given it away). I try not to hold it against her. So, of course, I had to make something that no one else would possibly give her.

I made baby chaps.

Yup. I went there.

After I had thought of the idea, I went to the googles and found this tutorial, which was enough to get me started, anyway. 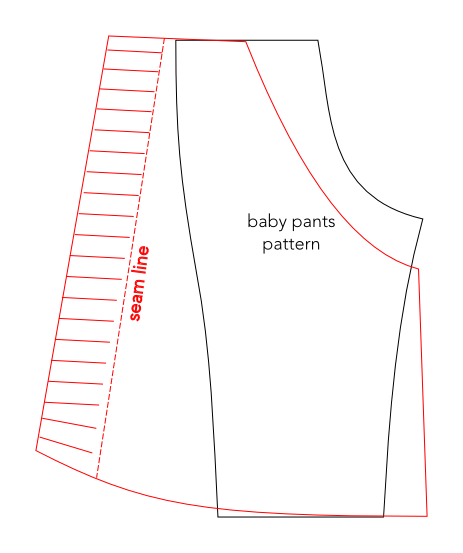 I started with a baby pants pattern, since I didn’t have a pair of baby pants handy. It got me in the right scale ballpark, anyway (since obviously I no longer have any idea what size babies are, see my last post for evidence.) I wanted an outseam so I could add fringe to it; in hindsight I could’ve made the inseam on the fold and saved myself, oh, six inches or so of sewing. Anyway.

I chose for my fabric this browns stretch velour a friend of my mother’s gave me because she didn’t know what to do with it. Obviously I didn’t know either, as I’ve been sitting on it for a couple of years now, but it’s soft and cozy and the colour was reasonable for leather, so I think it may have found its true calling, presuming I need to make about fifty pairs of baby chaps. I made each leg lined, so they’re fuzzy on the inside, too. I used my new walking foot from Sew Classic, and while I didn’t do comparison samples without, it did a very nice job of feeding all the layers together, straining only little when I had four layers stacked to sew the outseams.  I stitched the outseams so that the extra-wide seam allowance was on the outside, and then went to town snipping little fringes. They’re super cute now, although I won’t vouch for how they’ll hold up in the wash. Then I added the band at the top, with elastic (hopefully about the right size for a baby waist, I have no frickin’ clue at this point.), and made a belt buckle out of some silver lining left over from this vest. For the belt-buckle, I followed Sew A Straight Line’s tutorial pretty much exactly.

Then I sewed it on backwards. That is supposed to be a Z, not an angular S. And my latent dyslexia kicked in, so I didn’t even realize it until looking at photos after. Just shoot me now. 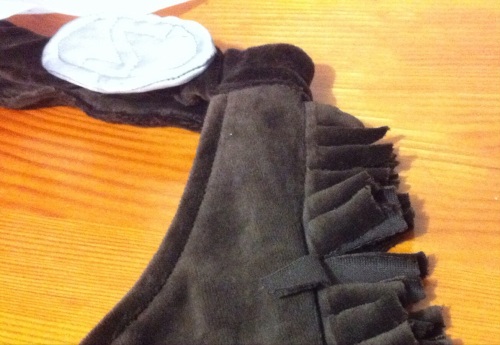 I actually thought the fringe turned out really well; I was not at all sure it would, and they looked pretty lame before I snipped it, but I think it worked great, maybe because there were four layers of fabric to snip.

Anyway, I think they went over well. There were plenty of onesies and blankies and even a full-blown diaper cake, but there was definitely only one pair of baby chaps.

Although, I have a sinking feeling I should probably get started on the next size up…