(Most of this post was written in early 2016 when I made this Jasper. But I couldn’t seem to get it photographed. Today I happened to be wearing it (which I do nearly weekly in the winter) and since my new(ish) hallway is perfect for snapping really quick photos, I actually managed to take some!)

I think I bought the Paprika Patterns Jasper Sweater/Dress pattern the day it came out. Seriously, I’ve been reading Lisa’s blog since she was first playing around with this hood design in 2011 or something. I even started to draft up a version of the hood pattern based on her early tutorial. I didn’t get around to testing that version, as I’m easily distracted, but you get the idea how much I liked it. I even bought this fabric over a year ago*. (*2015) 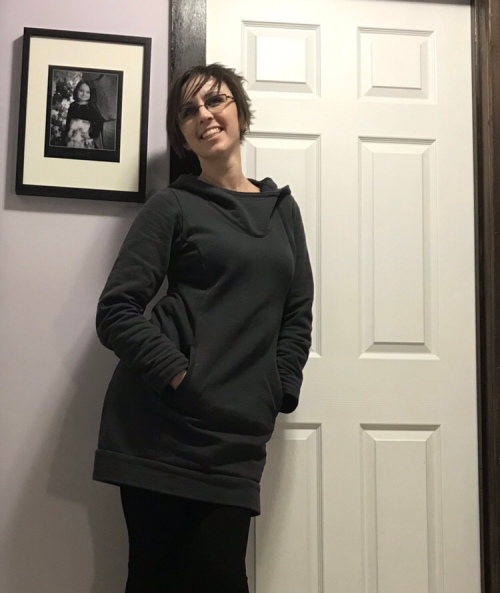 So why did it take me so long to make up? I honestly have no clue except that I’ve been having a hard time with PDF patterns the last year or two. It’s probably more mental than anything else, but the paper patterns have been getting sewn while the PDFs just languish. Having my printer on the fritz for a large chunk of last year didn’t help either… 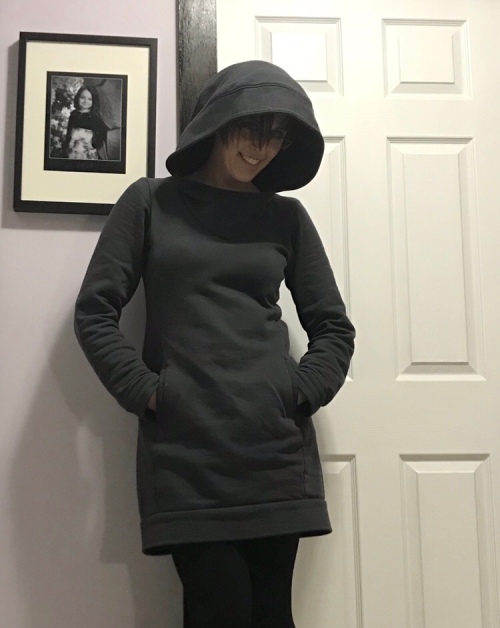 Anyway, nothing like a holiday to get you over a hump like that. In the wake of Xmas, I finally got myself motivated to tape the pieces together and make it up. Mainly on New Year’s Eve.

My measurements put me squarely in the size 3, which was lovely, but the pattern indicated it was drafted with 2.5″ ease at the bust but only 1″ at the hip. This seemed a bit snug to me, so I cut a size 4 at the hip area. I added about 2″ to the sleeve length (quite modest for me) based on comparison with my sleeve block, but made no other alterations.

I spent an uncommon amount of time (for me) reading the instructions, since I was clueless about both the front pocket construction and the hood construction. They were great although the hood directions lost me a bit. I still got my hood together, so it’s all good, but I won’t swear there weren’t some details I glossed over. She has a tutorial on her site, so probably I should’ve looked at that. Impatient.

Once I got it together (I love how the sleeve goes in!) it was very blousy in the back, so I took a good chunk off those handy rear princess seams.

My new sewing machine let me down, however. It’s really been a trooper, but when it throws a tanty  (best Austrialianism ever. I feel entitled to use Aussie slang now that I’m related to one. My brother took his citizenship down under this past fall. Yay him. Boo for us.)  it throws it. It would not top stitch the pocket welts. Would not, no way no how. This thing has plowed through five layers of tartan wool plus double-layered leather, but it did not like the layer of cotton spandex under all the layers of fleece. Like, five skipped stitches for every one that took. Next time I will try moving the needle to the side, and maybe also paper underneath.

Once I got through that part, though, things were gloriously breezy. I finished it in time to wear to New Years at my mother-in-law’s.

I will add one note: the pocket basically makes a separate tube inside the sweater. If you’re putting it on and find it’s strangely tight, you might be on the wrong side of that tube. I kind of burst a lot of stitching figuring that out.