Hallowe’en 2017: Interview with the Steampunker

I didn’t really mean to do intense Hallowe’en costuming this year—frankly I was more excited about decorating the house (which we ended up not even doing!)

But my kids had other ideas. Fortunately for me, they’re also old enough to contribute to the process pretty significantly.

We’ll start with Syo, because that’s who got her shit together and started sewing first. She wanted to be steampunk again. Wow, clicking that link was a flashback! Actually she wanted to be a vampire, but a classy one, with glue-in fangs. She even got the fangs, except that they don’t really work with braces. So, steampunk. But every choice she made it seemed like she really would’ve rather gone vampire. After some debate she settled on wearing my red Angel Underbust corset and making a coat, skirt, and blouse.

Repeat patterns help a lot for speeding up Hallowe’en sewing. For the coat, we settled on McCall’s M6800, which I made ages ago in camo denim and lace.

I won’t lie, making this coat hurt. Not because of construction or kid-wrangling issues, but because it used up not one, not two, but three fairly “precious” fabrics in stash. Most particularly a stretch denim with flocked velvet medallion pattern that I only got two mètres of, years ago, around when Cindy of Cation Designs made a pair of pants from similar fabric. I’ve been planning to copy her shamelessly ever since.

but now I won’t be. Since 2m is not enough fabric for this pattern, we had to continue stash diving to find something compatible. Settled on a nice, beefy bottom weight cotton stretch sateen. Not as precious as the flocked denim but still a nice basic I’d hoped to turn into something practical for ME. For lining, we used the last of my precious red Kasha, (what did I say about vampire wannabe-ism?) which would hopefully make the whole thing a little more Hallowe’en-friendly (Hallowe’en here is either on the cusp of winter or in full on winter so making costumes warm is a priority).

I’m telling myself it’s ok because she loves the resulting coat and will probably wear it for lots of other things, but mostly I’m only ok with it because we’re actually the same size these days other than height so all I need to do is make some detachable cuffs from the scraps and then I could wear it.

Syo did most of the cutting out and basically all of the sewing on the shell. I directed and sewed the lining and hems. And the main hem is the main thing that we probably should redo, because I hemmed the two layers together and I shouldn’t have, but we were on a tight time schedule. So it doesn’t hang as nicely as it should. I made the buttonholes but she selected and sewed on the buttons. 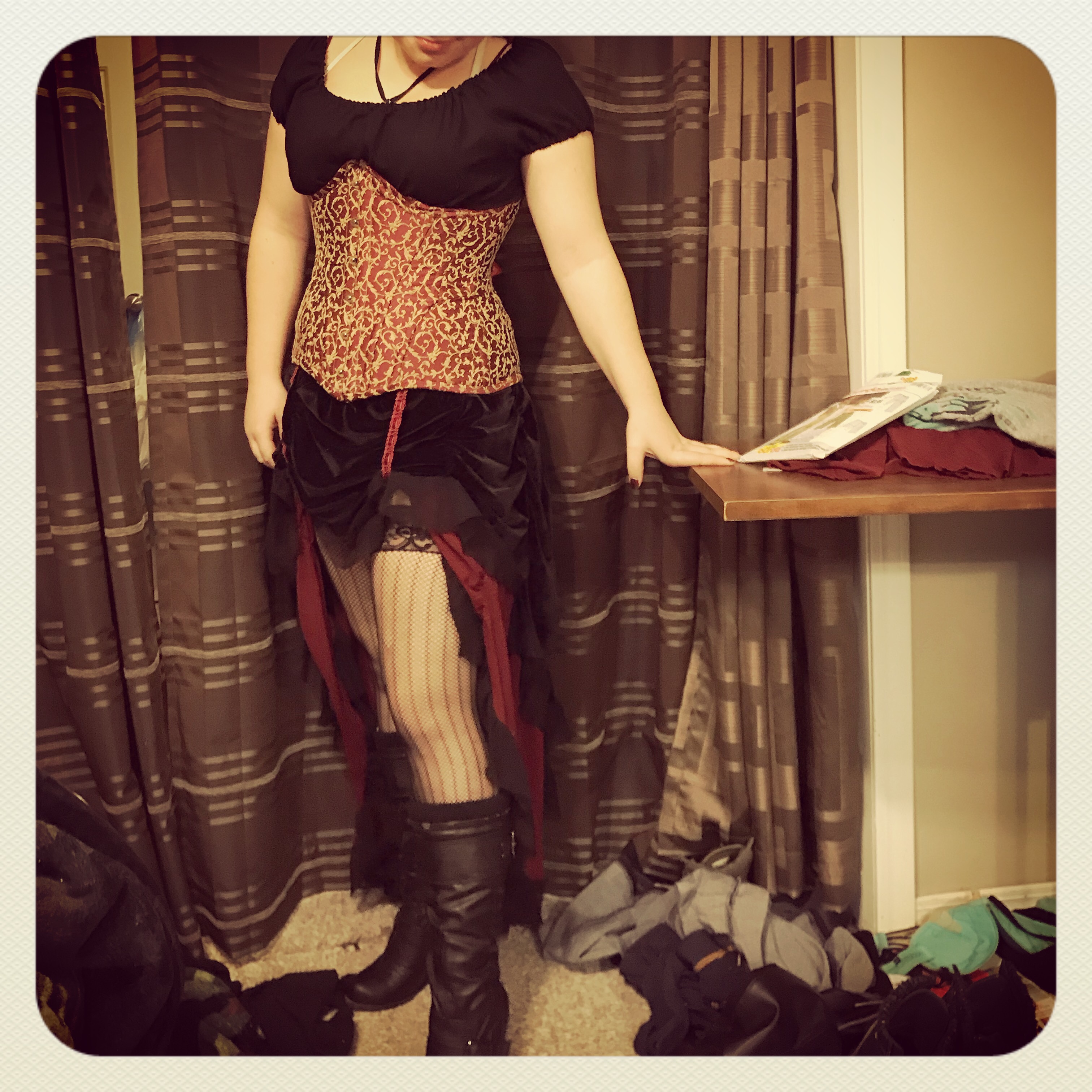 The skirt(s) and blouse were much simpler and quicker. I drafted the skirt as a high-low half-circle on some black stretch velvet. And by drafted I mean, took a measuring tape and some chalk and and drew lines right on the fabric. I made a bunch of ruffle with some still-kinda-precious-to-me stretch mesh, and added various gathered bits until it started to look ok. There’s an underskirt of red mesh made much the same way, too. It was harder to let Syo help with this part, since I was flying by the seat of my pants. But it also didn’t take too long. 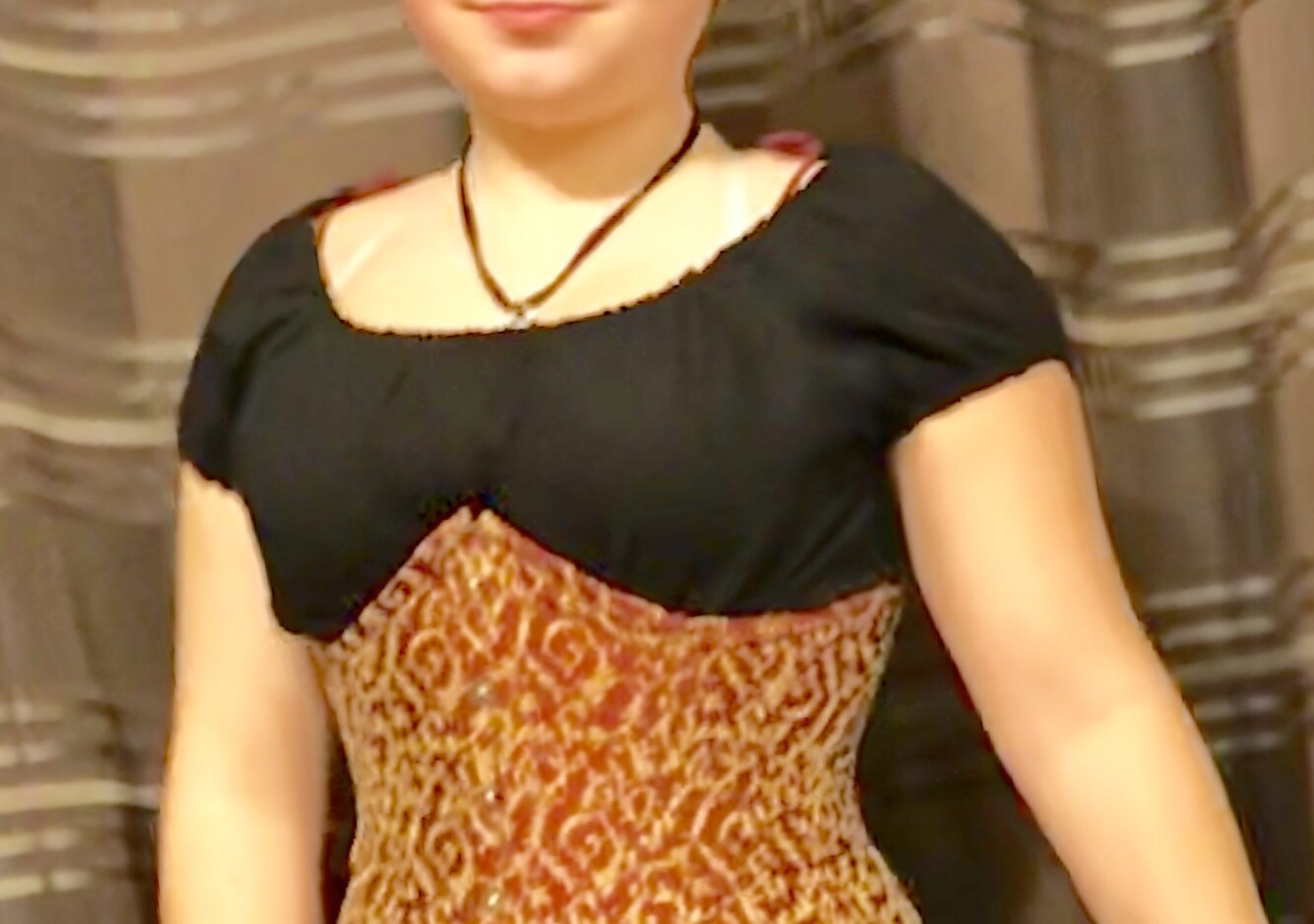 The blouse was both last and least. The pattern is just a peasant blouse from the late 70s, not unlike the first pattern I ever sewed. 😂 the only alteration was to shorten the sleeves a bit, though I suspect she would’ve preferred a more plunging neckline. The fabric was a remnant of black rayon twill that, again, was way too nice for a Hallowe’en costume. At least it wasn’t expensive. But rayon twill might be my new favourite fabric. 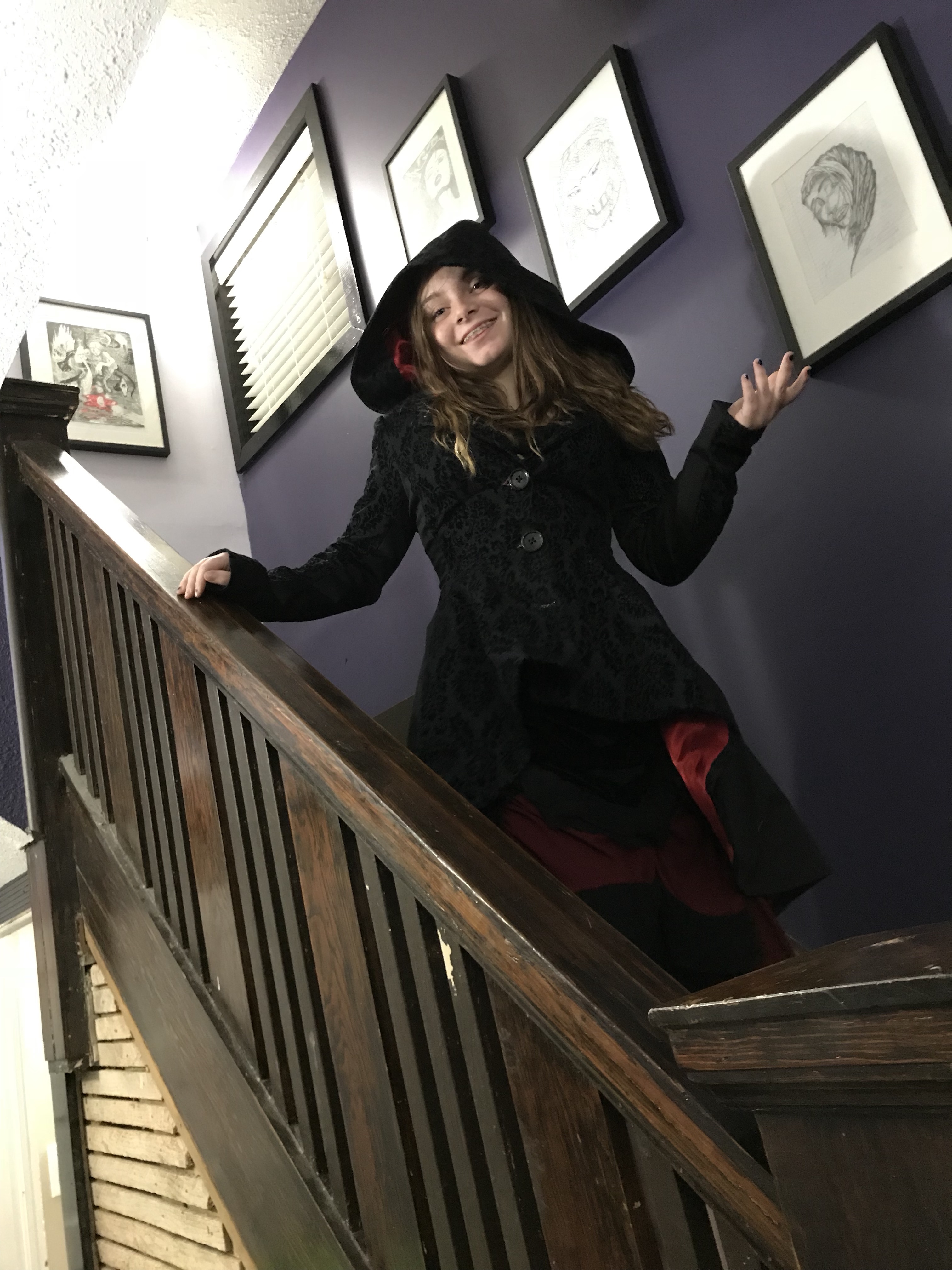 Guys, I love this costume. Like I wish it were for me grade of love. None of the snapshots really do it justice—it deserves a proper photo shoot. Someday. 😂

4 responses to “Hallowe’en 2017: Interview with the Steampunker”