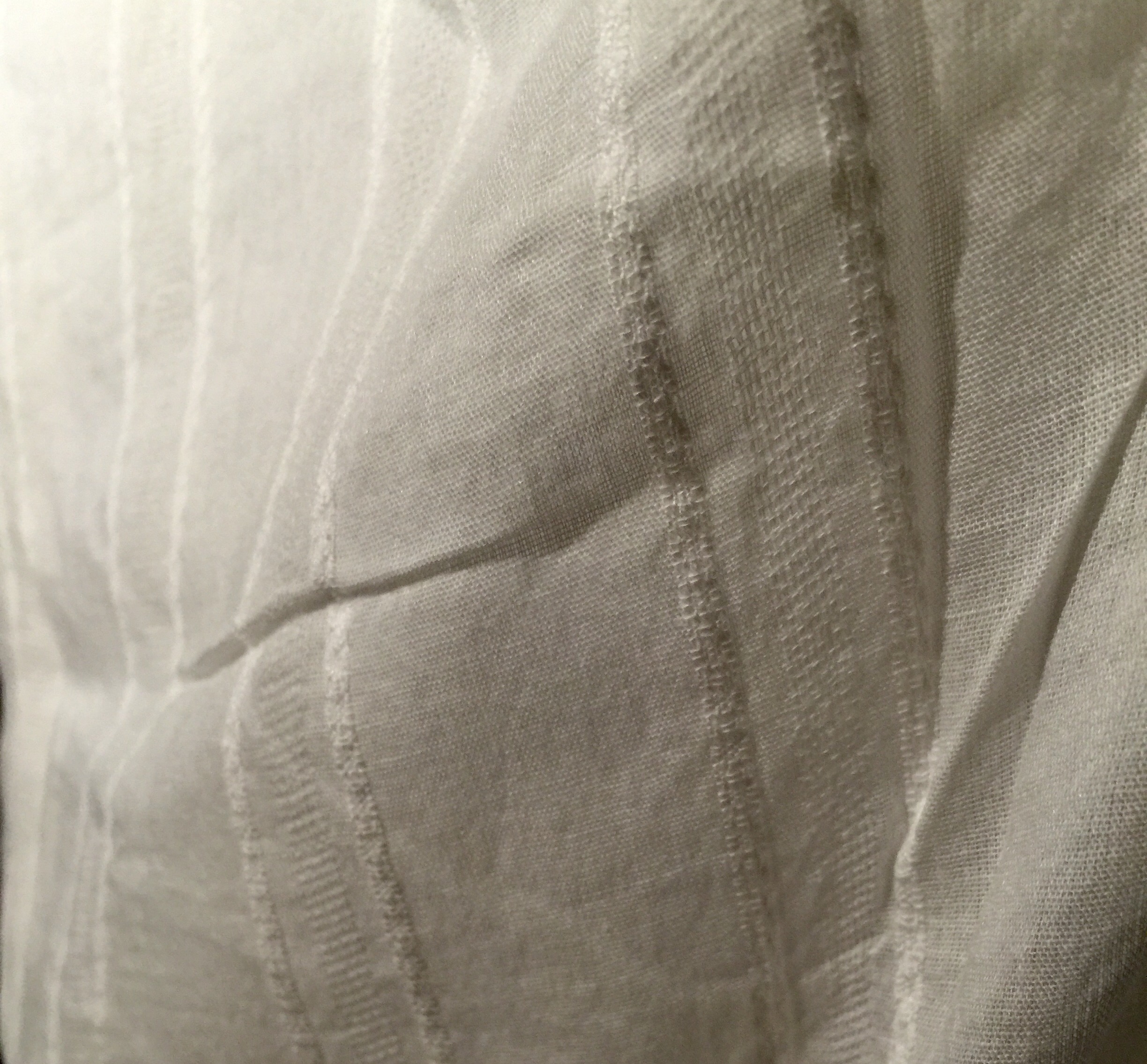 I found the perfect fabric for a stereotypical Regency muslin dress to go over my short stays, right there in my stash just waiting for the right project. (Seriously—it was one of those fabrics that I had bought purely because it was gorgeous, with no project in mind.) However, it’s also really freakin’ sheer (as Regency-style muslin should be) so, obviously a petticoat or underdress was in order. Since my stays are, um, a bit extravagant (i.e. not plain white at all) I wanted a full bodice for the under-dress, not just a strapped petticoat. And after paging through Janet Arnold’s Patterns of Fashion, I wanted to do a back-closing muslin dress, so I thought it might be preferable, then, that the under-dress have a different closure. And what else would spring to mind than trying out a bib-front closure. I was thinking along the lines of this: 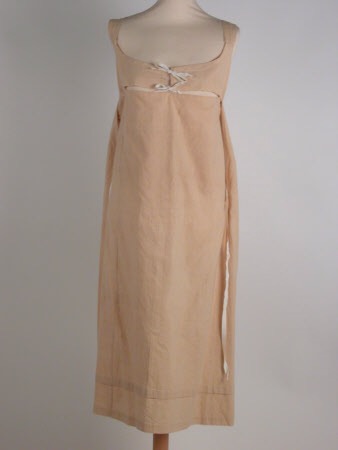 But with a bust-covering part to the bib. 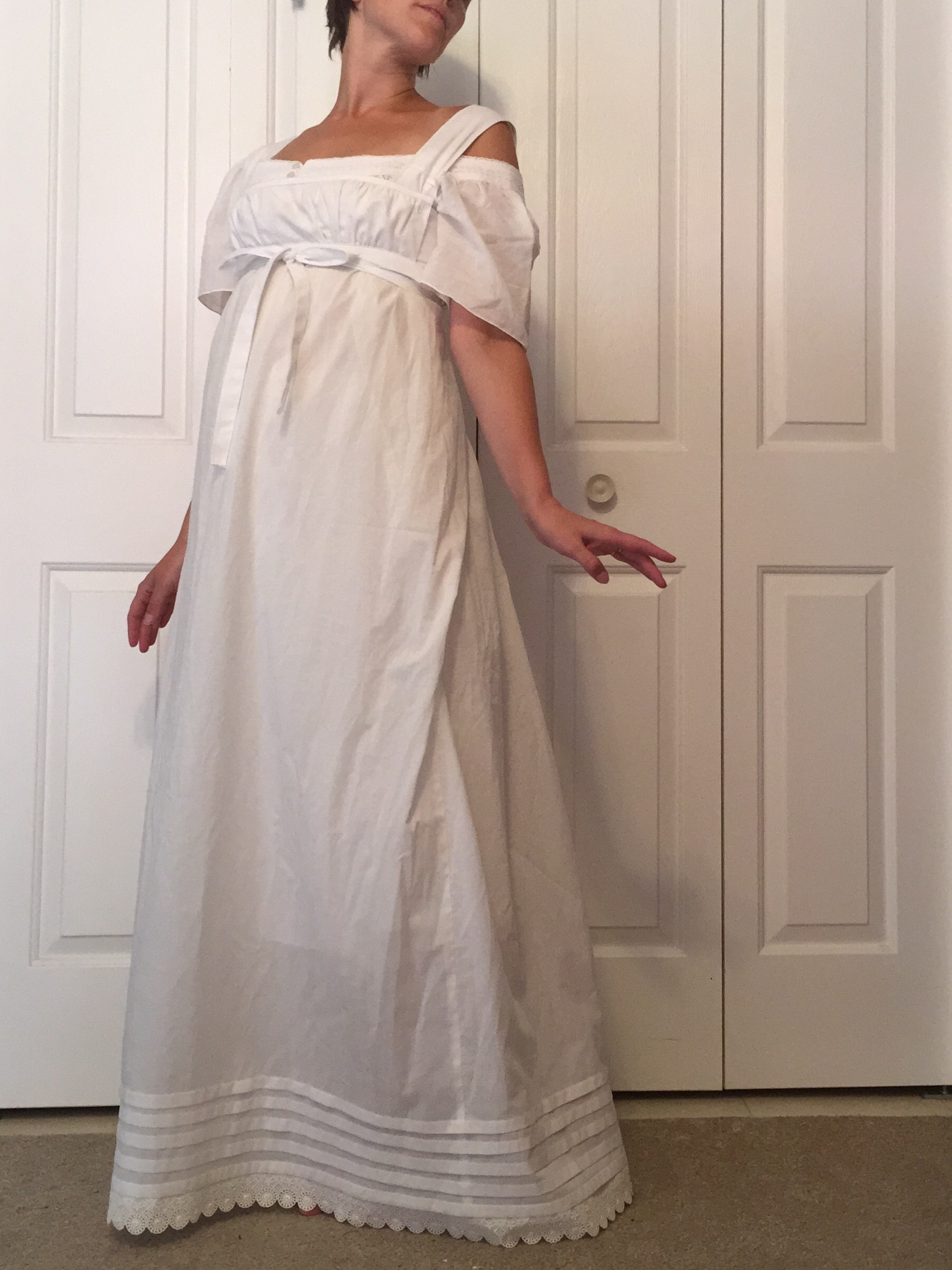 worn with no stays and totally the wrong chemise.

Mine ended up a fair bit, um, fluffier. 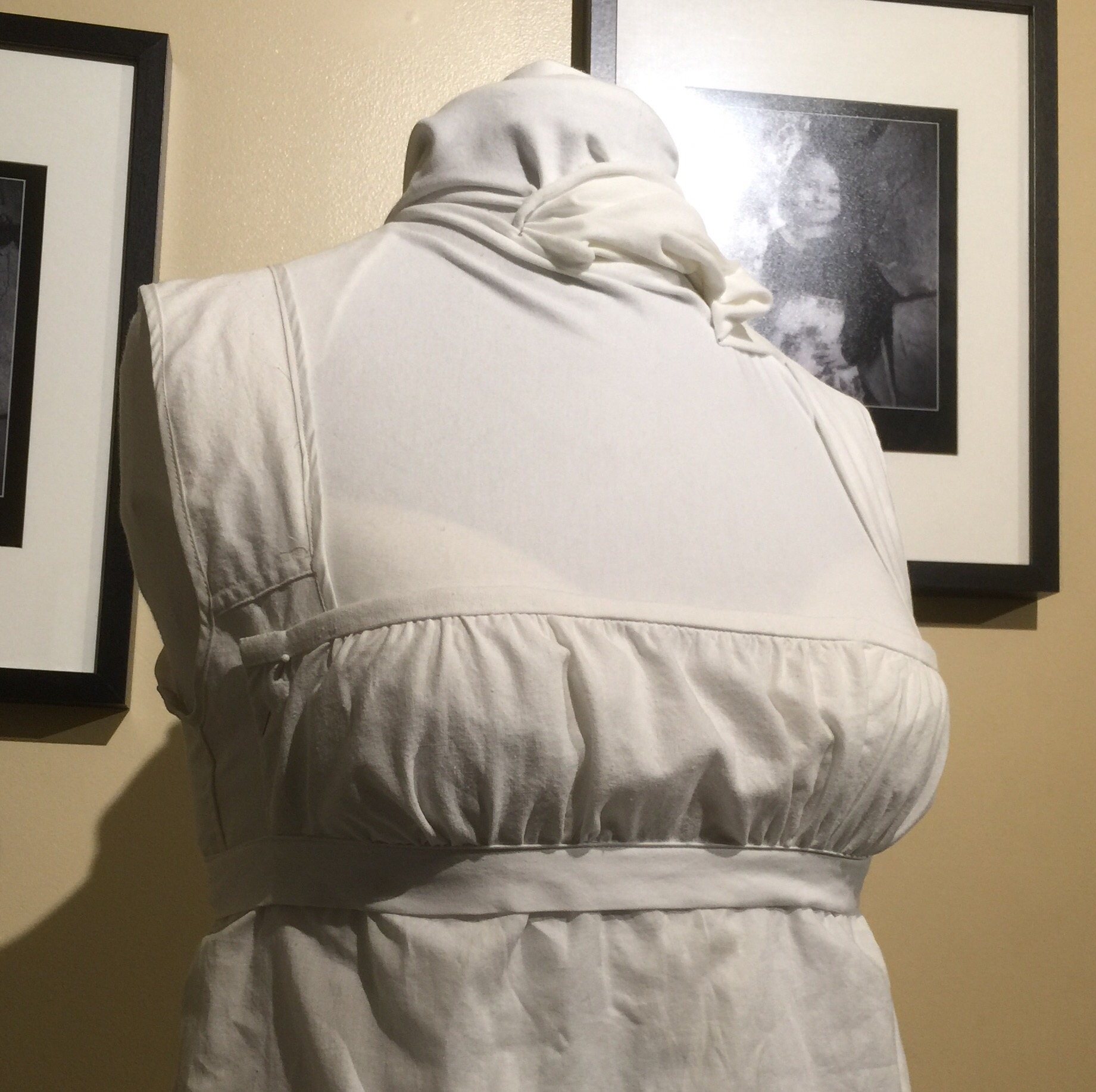 First off, I had read that bodiced petticoats often had a coarser fabric for the bodice part, so I dug around until I found a smallish end of fairly coarse-woven cotton. I had obviously cut it into something else, but I have no idea what. >_<  Then I went looking for something a little finer for the skirt—but not too fine. I found a big pile of white, medium weight, nice weave—oh wait, that’s the poly-cotton broadcloth I got from the bargain centre for $1/m because it was stained. (Stains came out in the wash.) But, no poly cotton on historical costuming, thank you. Next I found an even better option—pure cotton, nice close weave, not too heavy—wait, that’s the extra-wide stuff I bought for making that bedsheet. Um, no. Eventually I went back to the leftovers from the batiste I had used to make the chemise. A little lighter than I had been hoping for, but it would work. And there was just barely enough to make the skirt I wanted with enough length to add some tucks. Fortunately lace was on half-price that weekend. 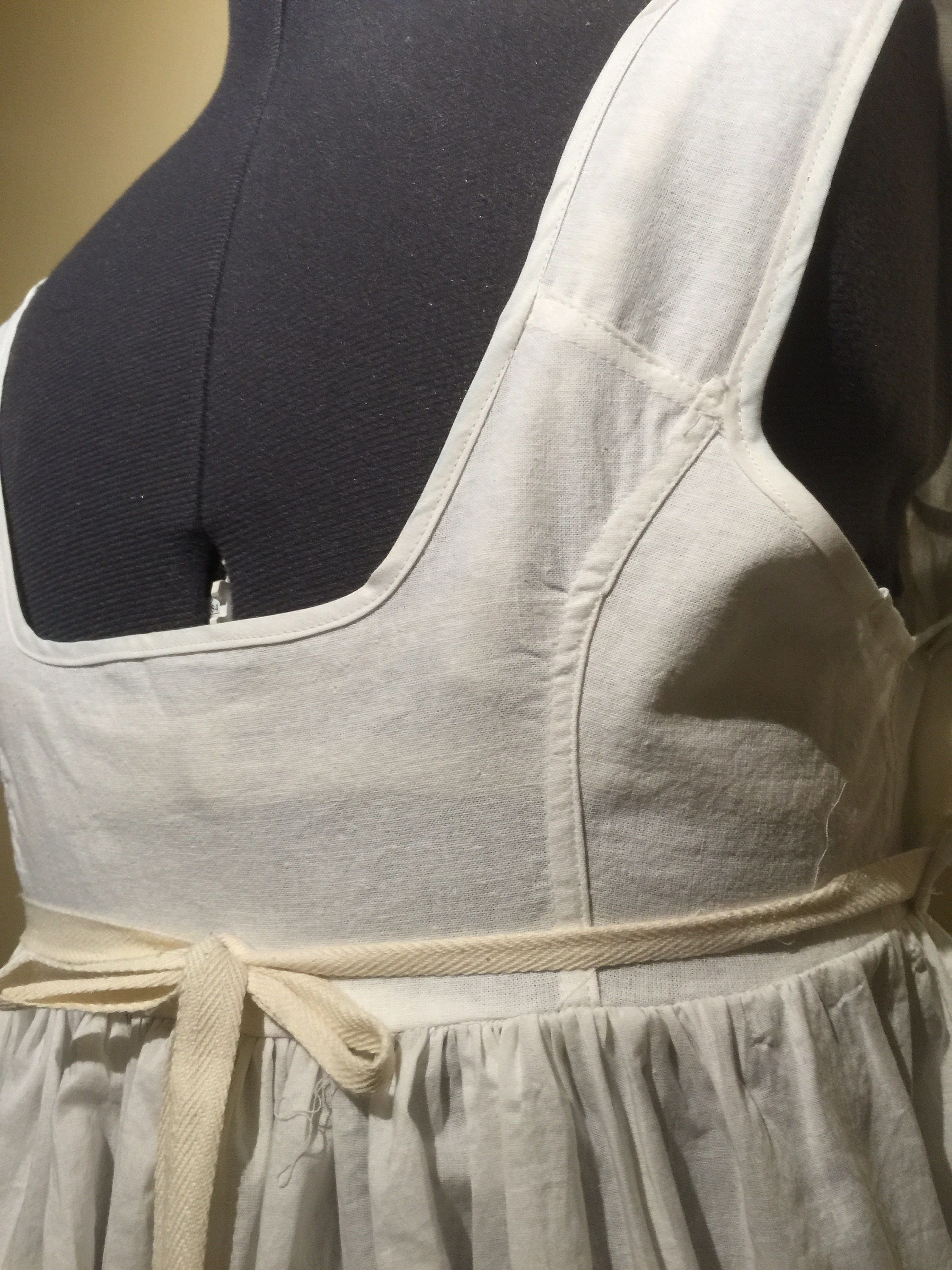 After some fussing and trying to decide if I could be bothered to scale up the pattern pieces from Patterns of Fashion and other angst, I decided to just modify the regency short-stays pattern for the bodice—cut it down in front and omit the gussets and it would look very much like the bodice in the picture above. At least then it should (theoretically) cover the stays. I have a feeling I should’ve cut everything a little wider and higher though… 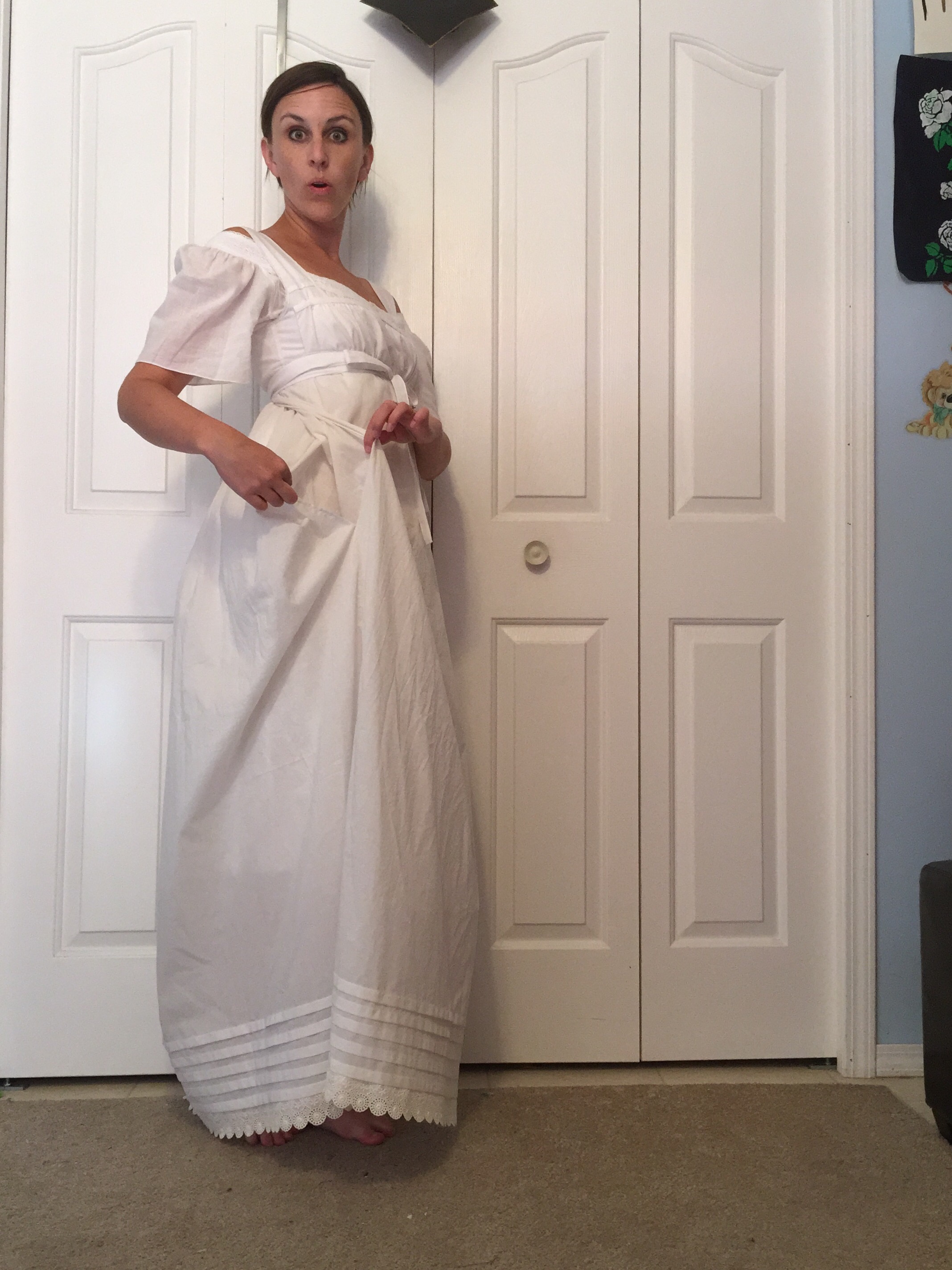 there’s a hole in my dress!

I wasn’t really clear on what the best construction technique was (accuracy-wise), so I  bound the edge with some home-made bias tape from the same fabric as the skirt. I even used my little bias-folding-ironing doohickey. It’s not my best work, but it will serve, although I’m pretty certain it’s not terribly historical. The batiste bias tape is pretty delicious to work with, though, especially with just a little bit of starch added. 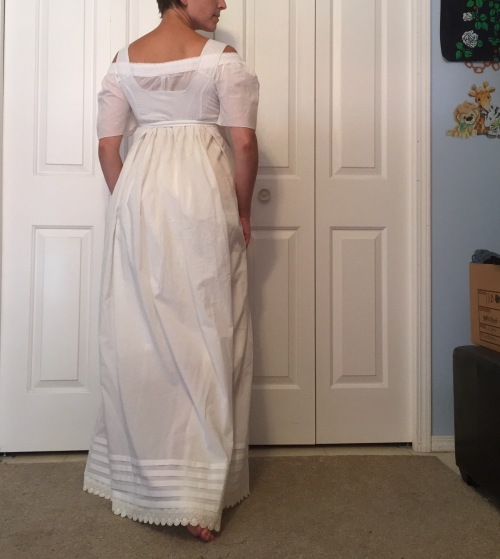 It took a couple of iterations of the bib to get the sizing and amount of gathering right, and it may still be off once I try it with the stays, which are away being on display for a wee bit. I initially made the same booboo the Dreamstress recently fixed on her gown, gathering all the front width onto the bib, rather than having part of it extend around the sides below the join.  Again, I’m not sure how accurate my narrow band/ties are, but it’s certainly functional. I haven’t found as much on the details of regency construction as I did on Victorian bodices—maybe I just haven’t been digging in the right places. 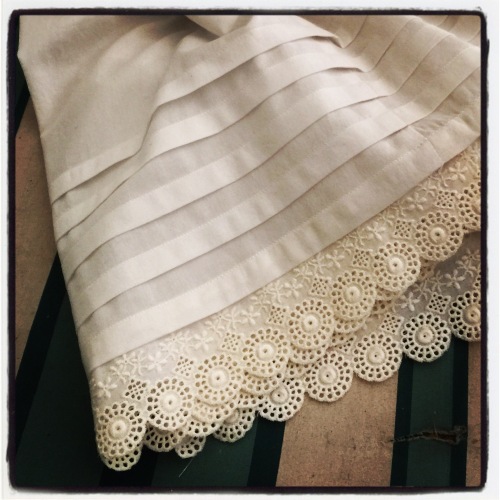 I was pretty annoyed that I had to go buy lace for the hem—I so wanted this to be a stash-only project—but I was very thorough with my other petticoats with using up everything I had for their lace, and the only eyelet lace I has in stash had a distinctly polyester vibe, especially around the embroidery, that would drive my nuts on a project like this. (Hallowe’en costume, Tanitisis!) 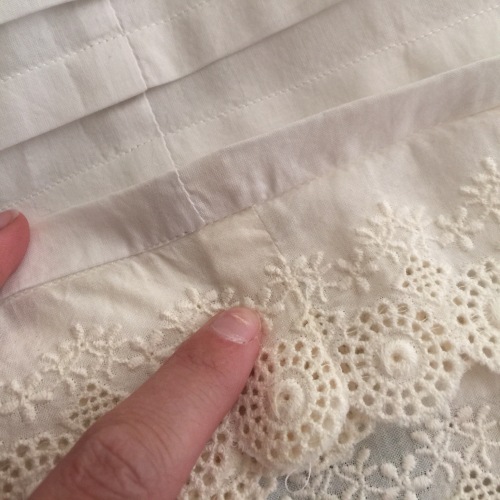 I finally mastered (on my second attempt) the method for attaching eyelet so that the seam is hidden in a tuck—basically the bottom tuck is a large, lop-sided French seam sewn on the outside of the fabric.

My hem finish was inspired by this bodiced petticoat at the Met, though its longer waist looks a teeny bit later to me (but what do I know?) and obviously it isn’t a bib opening design. 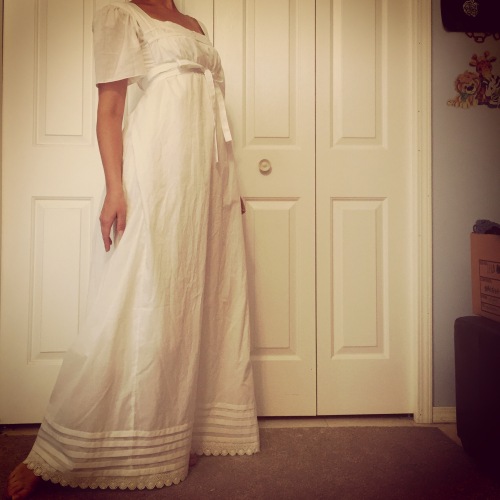