It’s been a dancey-sewing summer around here. Probably inspired by having some fun performances happening, although the vast majority of the sewing wasn’t related to that—it has still been fun to have some exciting new gear to wear to class. And, it’s all knits which are quick and satisfying, which is important for me always.

Anyway, one of my sewy friends made the mistake, a few weeks ago, of lamenting over a black & purple striped spandex fabric she’d picked up some ends of a few years ago, and never actually used (her sewing has been rudely interrupted by that whole having-children thing the last few years). And then yesterday, while ogling her stash during a visit, she said if there was anything I wanted to use desperately, just let her know—she’d rather see it used than languish in her basement.

Moments later I was cradling two or three metres of gorgeous fabric in my greedy little arms. I did leave her the other end piece (a metre and a half or so) for some future swimsuit.

It was time for some more Fauxlodias, and, of course, a matching crop-top, 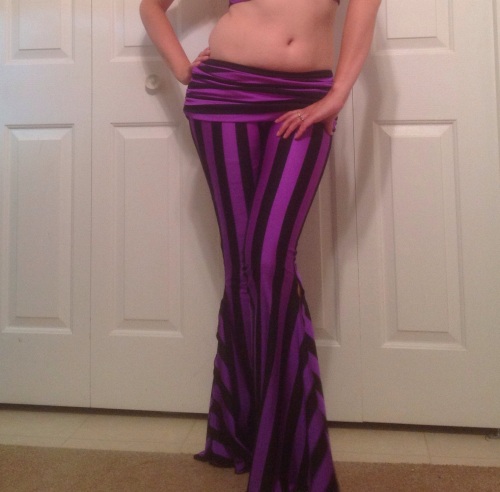 For the pants, I pulled out Jalie 3022 again, plus my add-on swoosh. 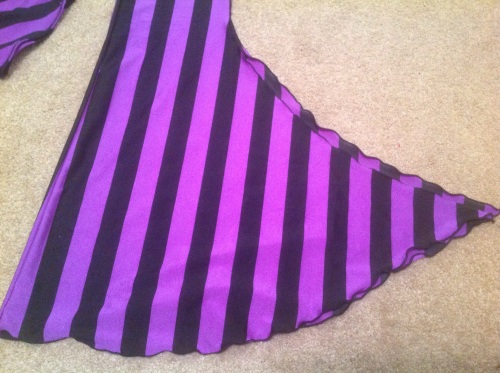 I didn’t want any extra seams in the back to have to match stripes across, though, so I attached the swoosh to the outseam and fudged the two back pieces into one. The back seam is pretty much straight except for a tiny dart incorporated into it at the top—i just shaved an amount equivalent to half the dart off the outseam and centre back seams. Not terribly scientific, but these are knits we’re talking about. Yay, knits. Oh, and after checking that the stretch lengthwise was similar to the stretch widthwise, I decided to run my stripes up the legs of the pants vertically. Less stripe matching to do that way. Also looking cool.

I wanted to add a ruched, fold-over waistband/overskirt thingy, for a bit more interest and because my hips need all the oomph they can get. I got the inspiration for the construction from the mini-skirt on Jalie 2920, but I didn’t actually use that pattern because it’s over at my sister-in-law’s house since the last time I made leggings for little girls.

It’s a short skirt with side-seams, mirrored at the hem, so the hem ends up being on the fold. When sewing up the side-seams, I added clear elastiic, stretched as much as I could, so that they would gather themselves up. Then I sandwiched 1.5″ wide elastic between the two layers at the top, and serged the whole thing to the top of the pants. I decided to put the serged seam on the outside, so that it’s covered by the fold-over of the ruched-up “skirt” when you’re wearing it. 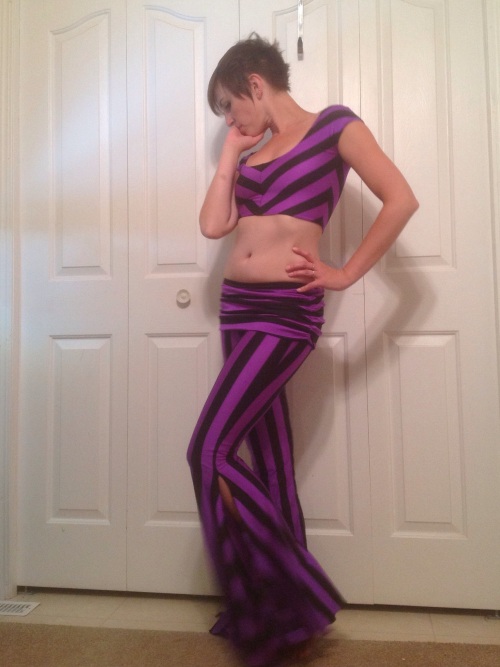 The crop-top is the top of the franken-pattern I put together for my red velvet dress, which is largely Kwik Sew 1288, with a few modifications for fit based on my Nettie, cut on the bias with CB and CF seams to make that fun chevron.

Because I’ve been aching for a good striped knit to try that chevron design. (OK, I could perhaps have tried it with my black and white striped spandex, but I didn’t think of it in time.)

This stripe isn’t quite as nice quality-wise as that black-and-white one, by the way, although it’s close. The fabric is a little thinner, and the stripes were a bit irregular in some places, which is really weird and makes it really hard to stripe-match. Fortunately it’s a knit, so the fit is fairly forgiving. For a finish, I just serged the edges, folded under, and topstitched with a triple-step zig-zag. I feel like this is a legitimate finish for dancewear, at least, if not for regular clothes. 😉

Of course, the best part is how excited I am to go to dance practice this week, so I can wear my new outfit… 😉