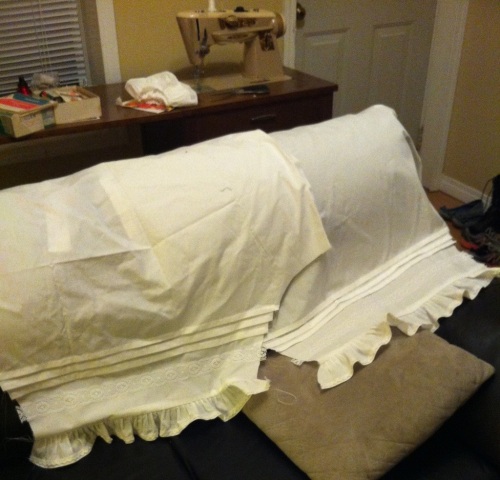 After a week or more of #cleandontsew (which is not nearly as fun as #sewdontclean) I got home from work and realized that, for the first time this week, I had no evening plans. Woohoo! Then my sister-in-law called and invited us over. But for a few precious, fleeting moments, I had time to sew.

I worked a bit more on my Victorian drawers. 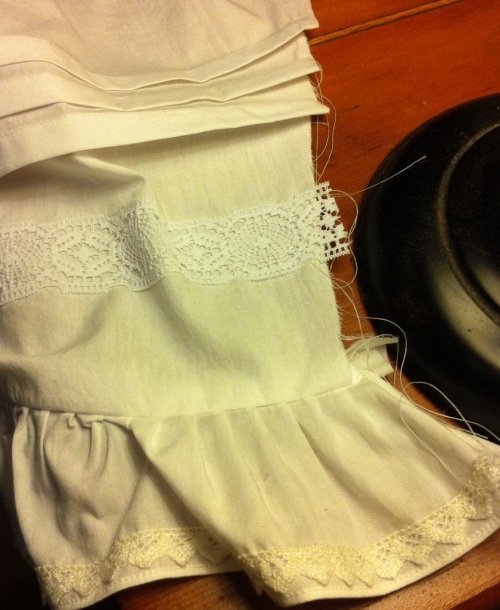 I added some more nice cotton lace to the bottom of the ruffle. It doesn’t match the colour of the not-nearly-so-nice not-cotton lace above. I am tempted to pull the other stuff off, except that would be annoying. 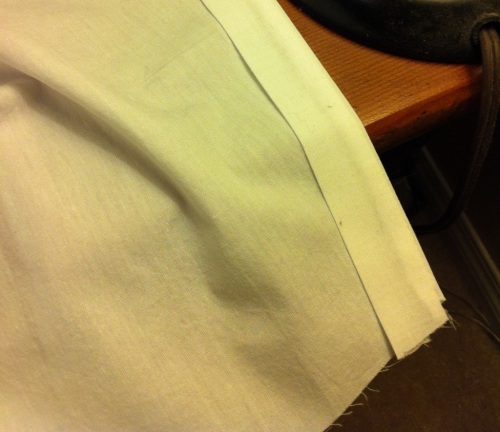 I started binding the edges which won’t be the crotch, because these are going to be split drawers, but which would be the front and back crotch seams if these were closed crotch drawers. Except, I got confused and used the wrong white cotton (somehow I have acquired at least six swathes of white cotton in my “Victorian underthings” box. Yes, I now have one of those.) So the strips are rather lighter weight than the rest. I’m thinking I don’t care. Or I could make up something about it reducing bulk. As long as I remember to use the right stuff for the waistband.

I used a similar band on the inside where the ruffle attaches. This is not one of the hemming techniques that my Victorian sewing texts recommend—one suggested making a quarter-inch tuck three eighths of an inch above the bottom of the fabric and sewing the ruffle on so it attaches under the tuck. Another said to finish the hem, then slash the bottom and sew the ruffle in between the two layers. I thought that this would produce pretty much the same effect as a separate band, so I’m doing a separate band.

I feel like my drawers are suffering a bit from issues of scale. The tucks are too big; the lace not sufficiently delicate. All the things that tend to make reproductions of Victorian items look like, well, reproductions. I’m trying not to sweat it—hello, novice costumer here—but I can definitely understand the authenticity-snob mindset. /sigh.

In other Victorian Costuming news, I think there’s enough of that lightweight, unbleached cotton twill that came in the Box Of Quiltness to make a petticoat. Possibly a bustle also. I am coming reluctantly to the conclusion that I need to make a bustle. The house was built in 1884, prime 2nd Bustle Era. Anyone with thoughts on suitable alternatives to metal bands for a lobster tail bustle? The American Duchess has a great tutorial. Also, now I want her button boots. >_<