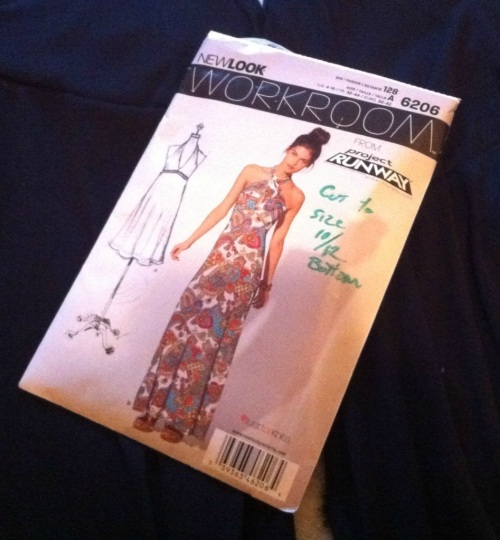 This is the pattern Epona and I eventually settled on for the majority of the bridesmaid’s dresses. It wasn’t our original choice, but it had two features I liked: first, it’s an in-print, inexpensive New Look pattern, so it was easy to pick up multiple copies for the multiple sizes, and secondly it’s a knit, which eased my other-person-fitting-stress quite a bit.

I started out with my own version, fortunately, because it’s a dog’s breakfast of rushed construction, mistakes, and pure stupidity (like the hole I snipped right in the back while trimming seams.) I remain not-a-fan of Big4 knit patterns (does New Look count as Big 4? It seems to be a subset of Simplicity, but then so does Burda which I know isn’t entirely so…), not least because I started with a size 10 and still had to take almost an inch off on each side. I modified the construction for the other three dresses so that the side-seams are sewn in one fell swoop, which will make adjusting the fit a whole lot easier, I hope. I sue got a lot better at sewing that V-neck. I also narrowed the ties and made the scoop around under the arm deeper, as this area seemed bulky in my version. For the bustier girls, I added a bit of clear elastic at the seam where it runs along the side-bust, in case of gaping, and a bit of an “FBA” at the bottom of the front bodice curve—hopefully that won’t turn out a complete disaster. I also raised the deeply-plunging neckline a wee bit, y’know, for those strange people who like to wear bras. Hopefully, I raised it enough/not too much.

And pretty dresses all in a row.

I won’t say it’s my favourite dress ever—let’s be frank, I love halters on other people but never really like them on myself. (I always feel top-heavy. Which seems odd considering I don’t mind puffed sleeves. Perhaps I need to try a halter style with a big poofy fifties dirndl skirt)

But it’s progress, which is awesome, because my time frame is getting freakin’ tight here.  There’s still the maid of honour’s dress. (And the four yards of SILK CHARMEUSE is eyeballing me from its little bag)

They will have hot pink sashes held on with sparkly brooches, to complete the wedding colours, but my HOPE is that I’ve created simple little black dresses that will be re-wearable. I really, really hope. *fingers crossed*

In other news, I’m using Gutermann serger thread for the first time ever, since my Fabricland was completely out of the cheap Coats & Clark stuff I usually use (in black). Yikes was it expensive (fortunately for me, Epona was paying and it WAS a half-price sale). I’ll let you know if, y’know, choirs of angels break out singing or anything. It does seem less linty, maybe. I’m a bit of a thread snob when it comes to my regular sewing, but I’ve always been of the “use any cheap crap for the serger” mindset. We’ll see.