So sometimes, you make a muslin, and then another one. And sometimes you get cocky and fit as you go. And then sometimes… You throw all caution to the wind, and just sew.

It occurred to me sometime after I painstakingly cut out the entire dress single-layer that, while I may have the Simplicity bodice block figured out, I probably shouldn’t be quite as cocky about Butterick. The last Butterick pattern I made myself was my winter coat, which is a bit of a different creature. And the way this is constructed I may not have any idea what it’s doing fit wise until I insert the zipper. So I may well be making a meticulous disaster. Ulp.

I tackled the most terrifying part of this dress yesterday—those folded cups. I got it into my head that I should pad the cups, partly because I’m using a really soft cotton for the contrast bit and partly because the curve of the dart really scared me once I had it stitched up, and this way even if I don’t fill the cups they won’t sag too badly. I’m liking the fit post-padding much better. 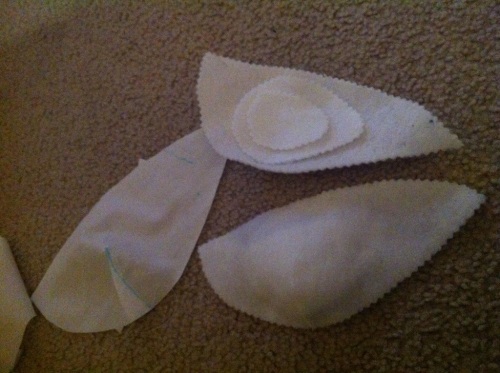 I used pretty much the method Tasia describes here, although I did nothing so responsible as re-reading her post. That would’ve been too easy. Basically I used the liner pattern piece, cut in some kind of batting that was kicking around. I cut out the dart (curving the legs for a nice shape), butted the dart edges and stitched them closed with a zig-zag stitch, and trimmed off my seam allowances with pinking shears. Then I free handed a couple of oval/egg shapes, progressively smaller, to fit inside, also with pinking shears, and hand-tacked them in place. This poly batting doesn’t feather as well as a cotton batting (Read Tasia’s post for a description of feathering), but with the pinked edges I think it worked okay.

Getting the pleats figured out took some more work (and even reading the directions!)… Mostly because they fold in the opposite direction from what I had assumed. Some seam ripping and swearing were involved, and my folds aren’t anywhere near as crisp as some of the other versions I’ve seen. I think it works with my picnic dress vibe, though. It does, right?

Now for the second-most terrifying part of this dress—that bias strap! And then, friends, then… The try-on!

Tagged as Butterick 5882, in progress

18 responses to “Jumping in”