A Tiramisu for New Year 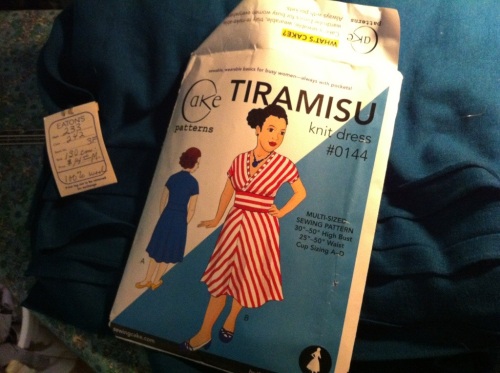 In a fit of “OMG I’m done my Christmas sewing!” euphoria, I traced out the Cake Patterns Tiramisu the evening of Christmas Day and made it up (except for the hem) the evening of Boxing Day. I’ve been running so crazily so long, having a few hours where we’re not supposed to be doingsomethingrightnow feels incredibly luxurious. Or possibly wasteful. Then I went to The Farm (which is liking Going Home, but with about five times as much nostalgia), so it languished for the better part of a week. But finally, tonight, I got to it. Yes, it’s New Years’ Eve and I’m at home sewing. We might watch a movie with the kids in a bit. Big party people, we are.

I used my teal wool Eaton’s jersey, in large part because I had enough of it (although, as it turns out, a fair bit of it had moth holes so there wasn’t as much usable fabric as I might’ve hoped. Poopy moths, anyway. There was enough, just barely) I’ve never worked with a wool jersey before. It was lovely, as wool generally is, I guess. Not too stretchy.

I cut, as per my measurements, the size 30D (you have no idea how much joy that number gives me, even though I know it’s not particularly related to actual bra size…). I do like Steph’s sizing system—for the first time ever I could customize a pattern to match my actual measurements.

I made only two alterations, my usual swayback alteration and shortening the bust after an initial try on. I think I caused more issues than I solved, though: one or the other of the alterations was too big, and the underbust seam is now about 1/2″ too high. BUT—the shoulder seam pulls well to the back; if I tug it forward to sit in the right place, there’s about the right amount of length in the front. Which makes me think that the issue was the shortening in the back. Which is why in muslin-making-ville they tell you to make one alteration at a time, so the two don’t confound each other. Number of times I’ve taken this advice? Probably 0. I did take the side-seams in a tiny bit, and might take a bit more off yet depending on how things stretch out with wearing. I’d be tempted to add a bit of elastic to the upper and lower midriff seams for next time, but maybe that’d be overkill.

Many views of Tiramisu

Other than that, and some funkiness at the front crossover area (probably also caused by tugging/not enough length), it’s a lovely dress. No complaints about the pattern. I was tempted to ignore Steph’s grainine on the skirt pieces since I’m not using a stripe, but the allure of having them fit nicely on the folded fabric proved too strong.

The length is great, and it’s insanely comfortable. Like,PJ comfortable. Which I guess is standard for knit dresses, but I don’t have many knit dresses. I was iffy about the pockets—last time I tried inseam pockets on an A-line skirt, the look  was not so good. But they don’t bother me, and I can tell they’ll be super awesome for actual wearing (although I had probably better not put too much in them…)

So yeah. Win. Aside from the problems I created for myself, anyway…

54 responses to “A Tiramisu for New Year”