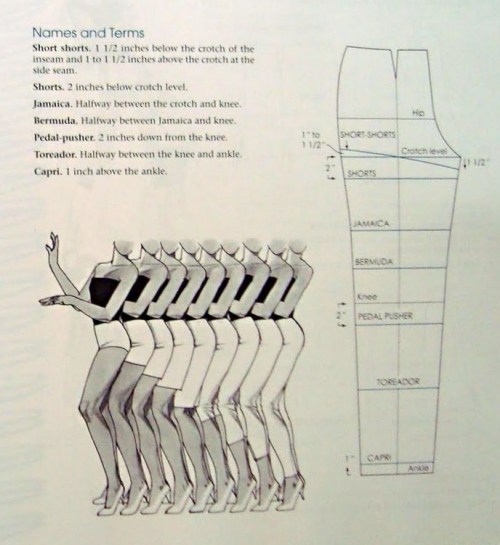 Curiosity over the actual definition (if there is such a thing) of the names for the various pants lengths after the piratas*/capris post led me to do some book-type sleuthing.

Here’s one picture, from Patternmaking for Fashion Design by Helen Joseph-Armstrong. According to it, we are all wrong and “capris” are the length only one inch above the ankle bone (which I would’ve called pedal-pushers or flood pants or clam-diggers, if pressed). Her pedal pushers and “toreador” length I would both have called capris. Apparently Bermudas are quite a bit shorter than I’d thought, only about 3/4 of the way down the thigh. Maybe I’m mixing them up with men’s board shorts. Probably this says something about the imprecision of everyday word usage, regional variation, and just my own failure to pay attention. Of course, I wouldn’t be surprised if there’s no actual standardized terminology. I don’t think there’s an International Code of Fashion Nomenclature that will bar your style from sale if it isn’t labeled appropriately.

What do you think? Any other “official” length designations out there I should be aware of? I’m a little torn on issues like this. On the one hand, who the frick cares? On the other hand, I spend most of my professional life dealing with extremely technical terminology, and I really appreciate the precision it allows. If there is an agreed upon standard, I’d like to at least know what it is so that if I screw it up, it’s on purpose.

Ooo, oo, I know what Tyo’s pants are! 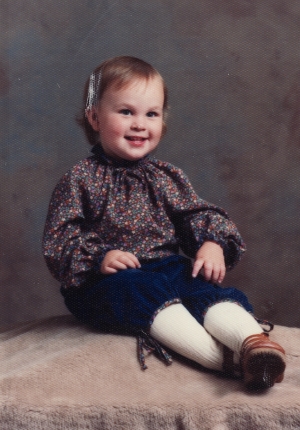 *the Patrones magazine is in Spanish, from Spain. Given the differences in clothing terminology between England and North America, I’m not going to assume that the terminology Patrones uses is common to Spanish-speakers worldwide, either.

Tagged as pants, pants lengths, terminology, too much talk

42 responses to “Lengths of the Pantses”