An Odyssey in Denim

Back in the late nineties, I was a high-school student exuberantly indulging in exploring my own style, limited only by my budget and what I could find at the thrift store. I had settled, somewhat reluctantly, on Levi’s button-fly 501s for jeans—they were a decently close fit, didn’t have the hugest saddlebags at the hips, and were comfy. They had one major drawback, however—the waist was quite high and, me being as rectangular back then as I am now, rather snug.

Yes, this was the beginning of my quest for the low-rise jeans. At the time, at least in my backwater corner of North America, stretch-denim was unknown, and waistbands still hovered just below the navel. 80s-tight was out, but I was so done with oversize-grunge, and the 70s revival was only just beginning.

One day in gr. 12, probably during Creative Writing class, I had a brainwave. If I removed the waistband from my Levi’s, they would be lower-rise, the waist would no longer be uncomfortably tight, AND it would be a cool inversion of the omnipresent cutoff denim shorts everyone wore. And because of the button-fly, they would still stay closed.

I have rarely been so pleased with myself for any fashion innovation. I wore my reverse-cutoffs proudly. With crop-tops, of course, to maximize the amount of tummy-tan. (I tried to find a lingering crop-top to pose in, for posterity’s sake. Apparently the last of them have been purged from my wardrobe, although it occurs to me that I do still have one cropped boho gypsy blouse in the basement that I bought when I was 14…) 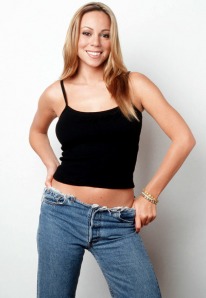 A few weeks later, I first saw this Mariah Carey video* (also a nifty article about the waistbandless-jeans phenomenon, which I have to say, in my area, was a phenomenon consisting of me and only me). I don’t think I can properly convey how crushed/angry/amused I was, to have been scooped on my fashion innovation. This did not, however, stop me from wearing my very first low-rises proudly. Two or three different pairs got the treatment.

Anyway, fast forward a year or two, and one of my pairs of hacked-up Levi’s was on its last legs. I had moved on to other jeans styles at that point—notably vintage Wranglers—but I wanted to give my “innovation” one last hurrah. So I hit upon the idea of having a plethora of friends sign, draw, and write all over them. Sometimes while I was wearing them, mostly not.

Anyway, having created this unique piece of apparel, I realized I couldn’t really wear the (rather tattered) jeans anymore. I hadn’t heard of the idea of setting Sharpie marker with an iron, and after the first or second wash the text was showing significant signs of fading. So I retired them, and proceeded to cart them around with me in the “sentimental” box over every move (and there were a lot of them) of the next dozen years.

Sometime this past winter, Tyo found them.

Fortunately for me, she’s not quite big enough to steal my jeans yet. But she did like the idea. As she and her classmates are graduating to middle school this year, and we’re moving away, so naturally she’s been feeling sentimental all around and wanting a way to commemorate her class. Not long after finding my jeans, she hit upon her solution—a messenger-bag, made out of old jeans, that she could take to school and have everyone sign. 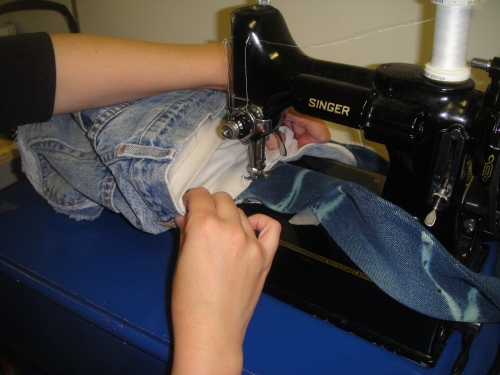 Now, ever since I saw these jeans of Yoshimi’s (back when I was brand-spanking-new to the world of blogging) I’ve been hoarding old jeans in the hopes of someday making my own pair. Well, that hasn’t happened yet, but the old pairs finally got put to use for this project, so I feel less guilty about the hoarding. Three pairs of my husband’s old pants (two jeans and one pair of khakis, if anyone cares) went into the making of these, plus the strap which was made from the cutoff legs of a pair of Tyo’s jeans which recently became shorts. 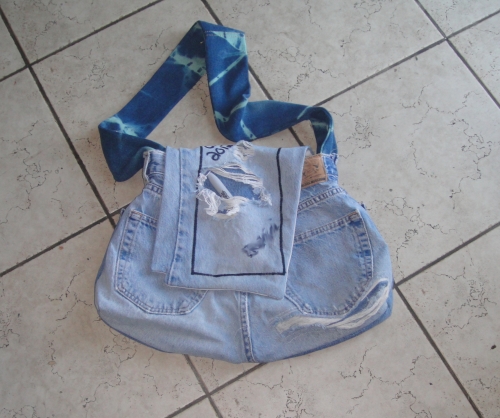 We made the main part of the bag from the butts—lots of extra pockets this way. The flap was from a leg area, the patch having been in use on the jeans. Tyo did the majority of the stitching, although I did a bit of additional patching as necessary, and the final stitching around the top of the bag, which was through the lining plus jeans waistband and belt-loops—pretty heavy-duty with some major changes in thickness. The featherweight handled it like a champ, although I still prefer to hand-wheel the really thick parts. I did a bit of re-stitching around the crotch to get them to lie flatter (the same thing you’d do if converting a pair of jeans into a skirt), and Tyo stitched across the bottom corners to give it a bit more of a 3D shape. And an interesting cutout in the corner of the flap. Just because. 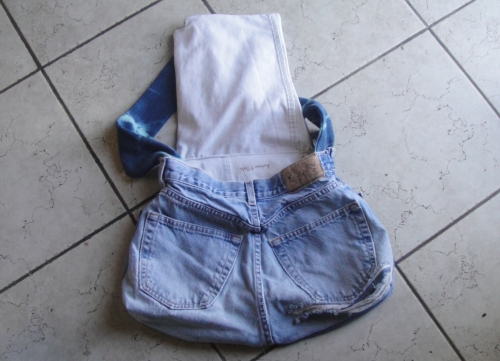 And Tyo took it away to school with a big, fat sharpie. Apparently her replacement teacher (who has been the source of much angst the last few months) was not impressed. Ah, well.

Tyo, at least, is happy.

Now I just have to manage to iron all that sharpie.

*This is one of those Lessons On the Fallibility of Memory. I would swear that I cut my waistbands off in Gr. 12, and saw the video shortly thereafter. I graduated high school in June 1998; the video apparently came out in 1999. Am I transposing my brainwave earlier? Or was the gap between my waistbandless jeans and Mariah’s longer than I remember? Who knows…

Tagged as finished projects, For Tyo, Kid-Made, Mariah Carey, too much talk, whining

24 responses to “An Odyssey in Denim”