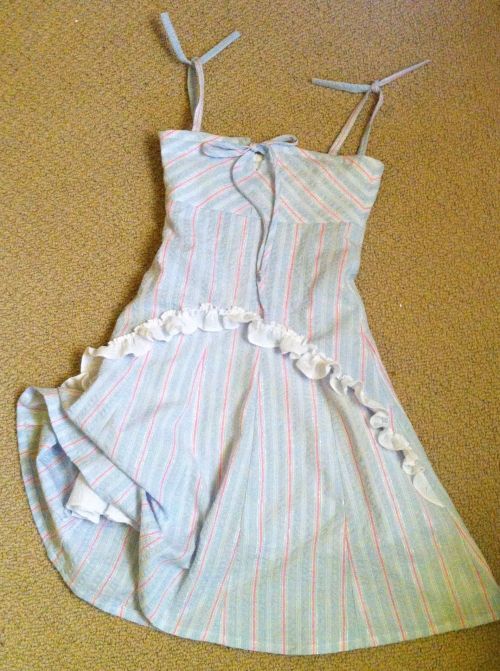 This is a sweet little dress.

A very, very sweet little dress. Too saccharine to have any business anywhere near either of my children, frankly (although Syo will probably bat her eyelashes at you to confuse the issue.)

Once again, this is Young Image Magazine pattern Y1111, from their inaugural issue. My first installation of wittering on the dress is here.

Looking at the photos and the line drawing, one has the impression of a rather complicated dress, but there are actually only four pattern pieces: front bodice, back bodice, skirt panel (gore, if you prefer), and front overlay. And a few instructions for making the ruffle and ties for the shoulders and the drawstring, not that I actually paid attention to them. I will confess, once I had figured out basic things like how many of the skirt pieces needed to be cut out (five pairs, by the way) and where to put the zipper, I didn’t look back at the instructions. I did improvise a fifth piece, for the skirt lining, but in hindsight I could’ve just used the front overlay piece and fudged a normal hem curve. I realized this right after I finished laboriously tracing the skirt panel five times to get a five-gore width. (Then I realized I only needed a two-and-a-half-gore-width if I cut it on the fold. *headdesk*)

As with Burda, you do need to add seam allowances to the patterns. I know some brave seamstresses who just eyeball these, or use little gizmos like the seam-measurers; I am not so brave, and add them on the tissue.

Being the brilliant thing that I am, I decided I was going to try and do chevron stripes on the bodice. Not being completely idiotic, I decided I would underline the bias bodice pieces with some  leftover cotton (lawn? batiste?) cut on grain. This was a good idea since by the time I had the chevroned seams (mostly) matched and stitched the bias pieces, they weren’t exactly the same size and shape they started out as. Seersucker’s kinda shifty at the best of times, and my relationship with precision is, well, hit and miss.

I realized after stitching up the skirt panels, that I’d had my needle set in the left-most position, so each of those many seam allowances (it’s essentially a 10-gore skirt) was just a smidge wider than it should’ve been. Oops. So I did have to shave a smidgeon off the bodice. I cut the size 128, as I was told my husband’s little cousin is a “skinny 8” and that was the size which corresponded with Syo’s bust measurement. Of course, Syo is on the shrimpy side for her age, too, but mostly that’s in height—she’s fairly sturdy and has my broad shoulders. Here’s hoping it fits. If not—I’m sure there’s a niece somewhere it’ll fit. I also added about 4 cm to the length, just at the hem of the skirt.

Can you spot the zipper? (PS the bodice seam is actually matched. I gave up on the chevrons, however. Also the difference in angle/grain between the skirt overlay and the gores at the side seem preclude stripe-matching on the skirt)

The pattern calls for a side-zip, so I pulled out one of my vintage invisible zippers, since I am officially “off” regular zippers after attempting one in the blue tunic. This was my first time installing a metal invisible zipper, and it was interesting. I remembered to stabilize the fabric with a little strip of fusible interfacing before stitching the zipper in, and I’m very glad I did because I think it would’ve driven me nuts. As it is, there’s a bit of poof around it, but not too bad. Anyway. I use Sherry’s method and install it with a regular zipper foot. In some ways this was easier with a metal zip—it’s easier to see the teeth, and they feel a bit sturdier so I was less paranoid about wrecking it. On the other hand, I was terrified I was going to needle down on one of the teeth and have sharp flying metal flying at my eye. It took me a couple of passes to  get the feel for how far back to rotate the teeth, and I did nearly sew my fingers a couple of times, but in the end it worked really well, and I even managed to figure out the trick of sewing the lining on by machine this time. 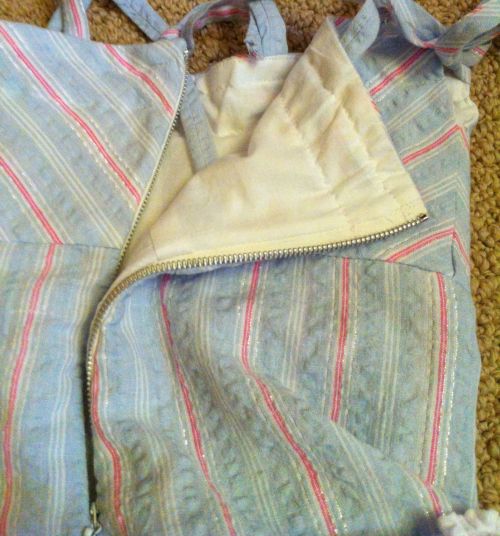 The combination of a drawstring and a side zip is, um, not intuitive. Basically, I ended up with the drawstring in two parts, both stitched to the zipper tape (if I’d been a little more together they would’ve been attached before I put in the zipper, but anyway)—a short one which goes from the side to the CF opening, and a long one which goes from the side, around the back, to the other CF. Hopefully this’ll work out—it’s mostly decorative anyway.

The pattern (OK, the photos from the magazine, again, didn’t look at the instructions) has you leave a gap in the stitching at the CF notch for the drawstrings to emerge.  This is easy, but there’s no real good way to finish the edges, and I’m kind of convinced that after a few wearings there’s going to be threads poking out like crazy, barring some hand-stitching. I considered putting a tiny little buttonhole in the front on either side of the notch, but when the chips came down I took the easy route. An eyelet would be cool, too, if you made a punk-y version of the dress. Which would be really fun, actually. Wouldn’t it be awesome made out of old metal-band T-shirts, with exposed construction and some scraps of black lace and studs?

I did the topstitching around the drawstring casing last. It was a little nerve-wracking making sure that I didn’t stitch down the drawstring itself, but it wasn’t as bad as I feared. I did hold the fabric very taut, since I was stitching three layers at that point, the top one of which was on the bias, and I was terrified the fabric was going to move and ripple. It did a bit, but not too much, at least on the outside (the inside, as you can see in the zipper shot above, isn’t lovely, but it’s done so I’m not going to sweat it.

I was going to wait until I could try and shove Syo into the dress to get some modeled shots before posting, but a) mysteriously she didn’t want to get up extra-early for a photo-shoot in the snow (yes, snow) before breakfast and b) I’m not 100% convinced it’s actually going to fit her. Although given that she likes everything skin-tight these days, that might be right up her alley.