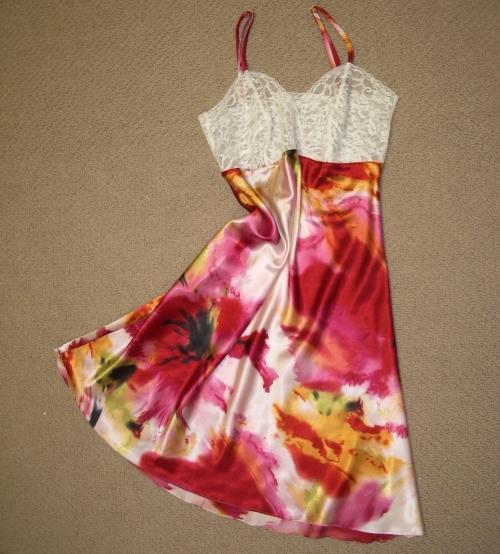 You may recognize this as the slip I teased about a little while back. Now that the gift is sent, I can talk a bit more about it. Ada, who has been one of my best friends since High School, is getting married.

Unfortunately for me, she decided to do it in Mexico, and between family and THESIS obligations and the eternal (lack of) money, I couldn’t go. This is the woman who came to prenatal classes with me, who was there when my kids were born. And I can’t be there for the most amazing day in her life since, oh—at least since she got her Master’s degree. POOPY!!!! 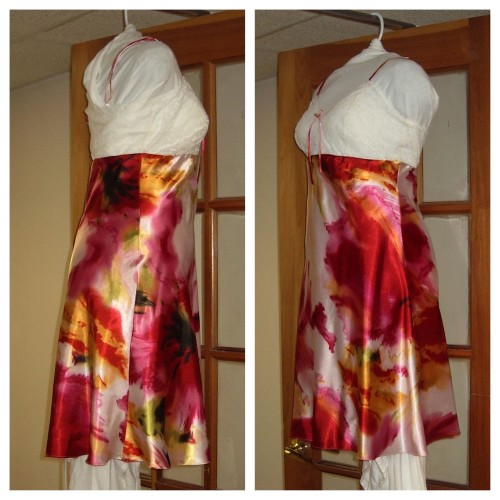 On the mannequin. Even padded out, the fit on my duct-tape-double is mediocre, but hopefully the real-life fit will be better.

But I could (attempt to) make something for her that would be, if not as awesome as she  is, at least really, really neat. And as soon as Sherry came out with the Ruby Slip pattern last Christmas, I knew what I wanted it to be.

Unfortunately, I also knew exactly what I wanted it to look like. Teal fabric with orange lace, her signature colours—a pairing as unique and awesome as she is.

The problem with having the exact image in your head is, nothing you look at in the store ever quite matches up. I even found silk charmeuse in the perfect slightly-burnt-orange shade, but couldn’t find a lace that was a worthy match. I bought four metres (!) of teal stretch lace (with sequins!) but while it has a certain coolness, it’s also tacky as hell, and I couldn’t bring myself to use it. This time. No promises for the future.

So, in the end, I settled. Despite being 100% polyester, this fabric feels just as nice as the above-mentioned silk (seriously, with my eyes closed I couldn’t tell the difference), and was a fraction of the price. Not that I was going for cheap here, for once. And while the print isn’t quite what I envisioned, it is very her. I think. Oona should be proud—I have such a hard time wrapping my head around prints. The lace is the same thrift-store stuff as my blue slip—as I said, I haven’t found anything nicer.

In theory, having just made the blue version, I should avoid making all the mistakes I made the first time around, right? 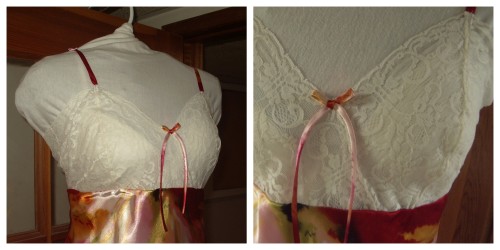 Sometimes that works. Other times, I just seem to end up paying less attention (because I totally know what I’m doing, right?)

So some things are better in this one (my bias side-seams, for example). Others… were not quite so smooth (some of my seam-matching on the bodice, eg.)

The fabric was slithery and slinky, as is to be expected. However, it mostly went together well. I think the most alarming thing about sewing on the bias is how the lovely 1cm seam allowance (my favourite seam-allowance width) can shrink to half or billow wider, all depending on how much tension you have on the fabric. Sherry suggests sewing the bias with a slight tension on the fabric, which is what I tried to do, but it’s still a bit alarming and fiddly. I didn’t have much trouble with riplling seams, though, except a bit around the bottom of the bodice that probably have more to do with the stretch lace and the clear elastic I added in there (probably not necessary) than the bias.

Now, those of you who just like to look at pretty pictures can probably go on with your lives. Those of you who actually enjoy obscene amounts of construction detail, read on. 😉 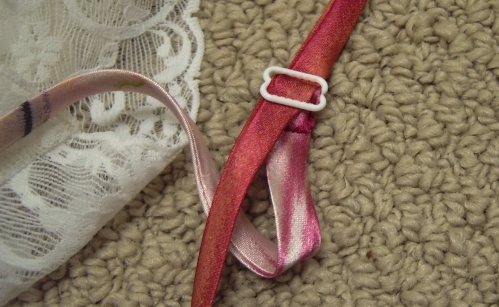 Not having the recipient available for fitting, I wanted to do adjustable shoulder-straps. Naively, I headed off to Fabricland to pick up little rings and sliders. I knew they had some bra supplies—underwires and formed cups and bra-hooks—so I assumed they would have little sliders, too.

You guessed it. Nary a little slider. There were two styles of complete, ready-made straps, with sliders on, one of which cost $12.95, one which cost $2.50. Of course, I didn’t want pre-made straps—I wanted gorgeous slinky silky matching straps—so, I went with the cheaper ones. Which means I basically spend two-fifty on the crappiest, cheapest plastic rings and sliders ever. I’m sorry, Ada. My bad. I promise I’ll replace them when they fuck up. I should probably have just bought a junk bra from the thrift store and scavenged off it.

Other than that, making the straps wasn’t too hard, especially since I could compare them with the crappy pre-made straps for how the loops needed to loop together. I wanted the straps to fit the sliders (at least more or less) so I didn’t make the straps as narrow as I could have. I will say, turning spaghetti straps in this kind of slinky fabric is insanely easy. I would’ve used the bobby-pin method, but I couldn’t find my bobby pin, so I used a small safety pin instead, and it worked just fine, although it’s not quite as slick as the bobby-pin method. Stitching the little loops wasn’t too hard, although I initially tried to attach them entirely by machine, which basically flattened my slender bias straps into fat wads of ugly thread. Fortunately the straps were super-extra-long so I was able to just cut off the booboo and re-stitch by hand. Not exactly the flawless finish I was hoping to give Ada, but pretty enough. 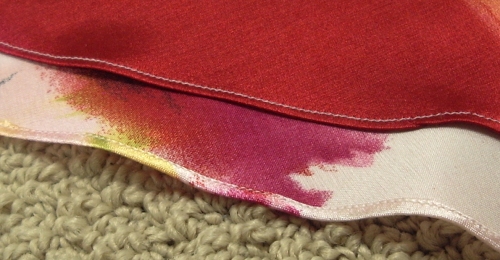 And then, when I had everything together, had hung the whole kaboodle, adjusted the length to be a bit more even (hopefully), I got a little crazy.

I decided I would try and do the hem with my rolled-hem foot. 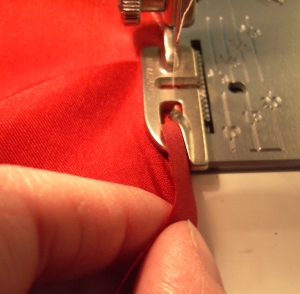 Judging by the comments on my teaser, I am not the only one who has a love/hate (or hate/hate) relationship with this damned, deceptively simple little attachment. It’s not coincidence that Sherry, for the sewalong, advised sewing the hem in two passes. Not that that method doesn’t require skill, either ;). I’m not quite sure what possessed me to try the foot this time, either, except bloody-mindedness. And I was going to go into a bit of detail here on my history with this insidious foot and the things I do to (attempt to) master it, but it was getting really, really long so I think I’ll throw it up as a separate post. Gotta milk my sewing woes for all they’re worth. 🙂 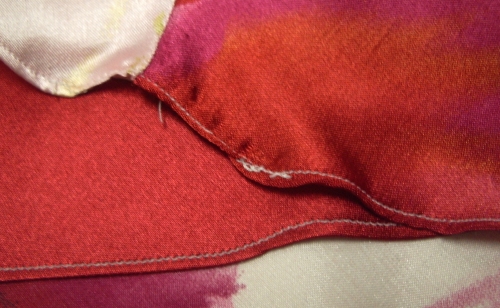 In short, I finished the slip, wrapped it up, and sent it off with a friend who was flying down for the ceremony.

So now my main fear is that it’s not going to fit. Ada gave me her measurements (high bust and full bust), and as she’s a rather well endowed lady, I did an FBA following Sherry’s method which I *hope* will be adequate. Part of it is that Ada’s lost weight since I last saw her (and probably more since she gave me the measurements after Christmas) so the Ada in my head is not the same size as the real-world Ada.

I seriously don’t know how people sew wedding-dresses. The hardest part of this make was that perfectionism (which I usually confine to areas of my life outside of sewing)  reared its nasty head. How can I send my BFF a wedding present with a wonky hem? With less-than-perfect stitching? That might not fit? That has cheap crappy strap sliders? Aaaaaaaaaah!!!

So that was my weekend. How was yours?

37 responses to “A Silkier Slip”