Does there reach a point where you’ve made up the same pattern so many times it’s not worth reblogging? I hope not. 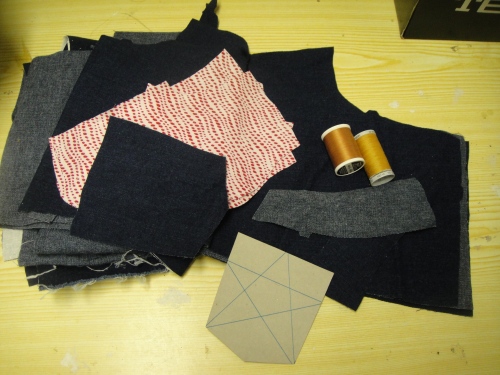 Just another set of Jalie Jeans

Anyway, on the weekend between tromping up and down the creek, I managed to cut out my next set of jeans. I would’ve started stitching them up, too, but I discovered unexpectedly that I was out of topstitching thread. How is this possible? Probably I’ve just mislaid it somewhere. So I had to wait until I could pop by a sewing store. Fortunately (or not) Sewing World, the peddler of fabric scissors crack, is right by the train station on my way home from work. They sell a LOT of thread. Much of it aimed at embroidery machines, but anyway. I was able to pick up a couple of spools—my usual Gutterman jeans thread, and some cotton topstitching-type-thread in a somewhat darker gold. I really like the colour, but I’m a bit hesitant about the cotton thread’s strength. I’ve had issues of thread-failure on my self-stitched jeans before, not in the topstitching thread, but in the regular threads. But all the previous topstitching threads I’ve used have been polyester. Hmm. Probably I’ll try it anyway, but now if it craps out after six months I’ll be able to tell myself “I told you so.”

For all the good that will do. 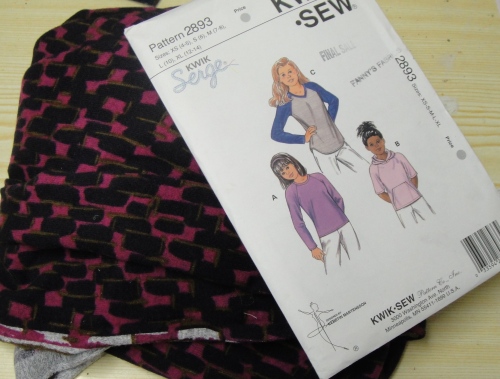 The kids have also picked out their next projects. Tyo wants a nightgown to replace some of the ones she’s outgrown the last little while. The plan is to use Kwik Sew 2893, a raglan-sleeved tee (and another thrift-store find), and extend it to nightgown length. Maybe add some shaping to the bottom, like on view C there. This is some fabric she picked out for making her teddy bear (did I ever blog her teddybear? We stuffed it with rice so you can throw it in the microwave and use it as a heating pad). Let’s just say that I have no qualms about letting her do whatever she wants with it, as long as it gets it out of my stash. 😉

Syo just wants  a quick sundress of the shirr-the-top-of-the-rectangle variety, out of the leftover fabric from my niece’s Mini-me (or is that Minnie-me?) dress. I think there’s enough. Of course, sundress season is largely if not completely past, but when has that ever stopped me? (Plus she’d probably wear it, happily, over T-shirt and jeans, to school all winter).

I keep talking (whining) about all the time we’re spending at the creek. I shouldn’t complain, it beats sitting around the house in front of the TV, which is what the rest of the family does the majority of the time (I, on the other hand, am far more virtuous and sit in front of the sewing machine, or the computer.) And it’s a good excuse not to get any housework done, at all. But it really cuts into the sewing time. Anyway, I suspect last weekend was the last of the creek-walking—the water gets VERY COLD VERY QUICKLY this close to the mountains, so I thought I’d share some pictures. Just because I can. 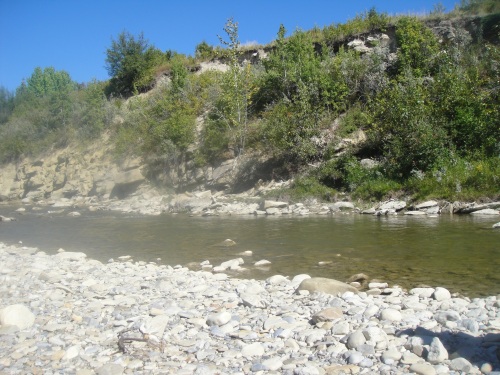 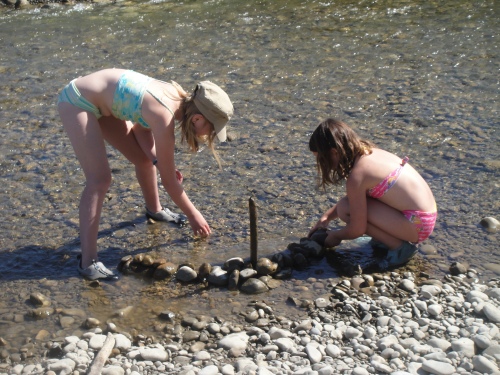 You may now return to your regularly scheduled sewing blogs. I’ll get to that soon, I promise.