Before I get into the tunic, I just wanted to say thank you for all the wonderful comments on yesterday’s anniversary post. I’m proud of my husband and our family, and of the way we’ve dealdt with the struggles we’ve gone through to get where we are now (not that we are done with struggling, by any means). My favourite quote about love (though I couldn’t name the source) is that “Love isn’t something you feel, it’s something you do.”

I have a bit of an ambivalent relationship with tunics. You may not know this, except, perhaps, by their total absence from my sewing so far. Basically, I have what can charitably be called a “boyish” figure, and I have generally figured that the purpose of clothing should be to emphasize what little I have in the way of curves, rather than skim over them. Also, I’m still recovering from a long-time perception that the tighter, shorter, and skankier an outfit was, the better it looked. So I’ve always tended to give tunics a pass.

But, in their massive popularity over the last few years (possibly in abatement now, but the trends can kiss my ass), I did wind up trying on a few here and there and, to my surprise, discovered that I really liked at least some of them. Who knew?

Anyway, one of my favourites has been a specimen with a wide hip-band, scooped, gathered neckline, flutter sleeves, and a keyhole opening in the upper back. And ever since I worked out my knit sloper over the course of last fall, I’ve been wanting to attempt to immitate it. How hard, after all, could it be?

This is not the ultimate version, by any means. Most egregiously, this version is about three inches too short, so that the hip band falls above my hips rather than at my widest point, especially after several minutes of wearing. I can blame this on nothing but myself, though, as I took the existing length of my knit sloper rather than actually measuring the original tunic. My keyhole opening in the back is quite a bit smaller than the original, too, for much the same reason, although this is less upsetting. 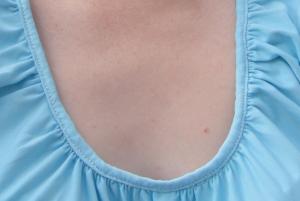 The hardest part of this entire project was binding the neckline. I have a really hard time producing nice bindings in thin, wriggly knits. I’ve sidestepped (or at least minimized) the issue in the past by using a lot of cowl-necked patterns or other alternative neck finishings for the thinner knits I’ve sewn up, but for this pattern I really needed to bind the gathered neckline. I achieved it, by dint of much fussing, cussing, and the flagrant application of both Steam-a-Seam and Wonder Tape, but it’s not especially pretty or professional-looking. Also keeping my gathering from squooshing under the machine foot was nearly impossible. It’s not perfectly even, but at this point I’m not going to complain. Sadly, I’m not sure I can do a lot better with the equipment at hand.

Other than that, and a bit of futzing with the back closure (between the neckline and the keyhole), I’d say it’s a reasonably successful first attempt, though. V. 2 should be much more satisfactory, or at least longer. The downside of taking your own photos with the timer is there’s no one to tell you your shirt is hiked up at the back. On the other hand there’s a pretty good chance this is the way it’d look most of the time when worn, anyway. 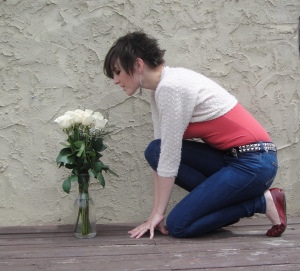 As you may have guessed, it still isn’t really warm, although at least we’re in no (immediate) danger of snow. Still, I shan’t complain—sun and mid to upper teens (C) is decent enough.

It does appear that someone’s been working some arcane rituals in the back yard, however. Maybe that will be more effective in bringing on the nice weather than all my hopeful sewing.

Someone's up to something...