Scraping the bottom of the barrel

The Cute, it burns!

As I contemplate the fact that I have hardly made any progress on, well, anything, in the last several days, it occurred to me that I never did a final post about the coat I made for my niece in January (like, after I put on buttons and hemmed it). So here you go—if you’re not into looking at an excessive number of photos of my seven-year-old, feel free to stop reading now.

As a quick recap, I (for better or for worse) came up with the idea that I would make some fun “winter” coats for my nieces (aged 4 and not-quite-3). Probably it had something to do with this sparkly black boiled wool being on sale at my local Fabricland… at any rate, when we dashed home at New Years I dragged (both!) my SILs to the fabric store and got some lush leopard-print fleece for the lining, and headed home with the aim of having at least this first coat completed by Niece #1’s birthday at the end of January. 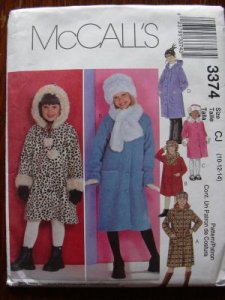 And I did. And if I were a mature and responsible adult, I would’ve had it in the post for said niece to receive in a timely fashion.

Instead, I dicked around, forgot about it, and now winter’s pretty much done (despite its best efforts) and the coat is still hanging in my front closet. Erm. Well, she’ll have it for next winter, for sure. And I’d really like to give the two coats at the same time. Right. That’s it.

Despite the explosion of fun-fur on the pattern envelope, this is actually a really basic, classic A-line coat pattern, with nice collar,  hood, and cuff options. It’s not lined, but when has that ever stopped me?

I made the size 4 for my oldest niece, which as you can see Syo is modelling quite handily—it’s a bit snug but not problematically so—so I’m not too concerned about the recipient outgrowing it before next winter. I will make the size 3 for my younger niece, who is even runtier than Syo was at that age (I wasn’t sure that was possible, but apparently it is), and hope that she can wear it sometime before kindergarten.

And now, without further adieu: photos.

The Cute, it burns!

Click to see inner button, backing the outer buttons. Much neater than just sewing through, and sturdier than stitching only through the outer layer of fabric

Rowr! Look at that lining!

Weirdly over-exposed, but I still like this photo. I might be biased due to my affection for the model.

Coat front, buttoned all the way.

Button closeup. My sister-in-law picked these.

15 responses to “Scraping the bottom of the barrel”