… and an unexpected benefit 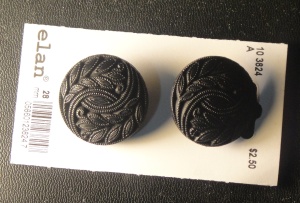 A lot of little things got done yesterday. I made it to Fabricland to pick up thread and got my buttons (By the way, photographing black, carved buttons is a bit of a trick. Oblique lighting for the win!). I picked up some bias hem-facing strips but then, on a whim, grabbed a couple of metres of red grosgrain ribbon to try.

Now, proper grosgrain ribbon has bumpy edges and actually eases around curves a bit, so would be perfect for a hem facing.

This ribbon was not that kind, however it did have those attractive little decorative white stitches at the edges.

Which, it turns out, also make perfect gathering stitches. WOOT! (This didn’t actually occur to me until after I had the ribbon sewn in place, by the way.) I sewed the bottom end to the hem itself, easing the shell fabric to the ribbon, and then gently tightened the upper row of white stitching to ease the upper edge of the ribbon in. Then I stitched it to the underlining. I actually started catch-stitching between the underlining and the ribbon, as Gertie describes, but it was lame and annoying, so I ended up doing something more like a slip-stitch. The final look may not be quite as soft, but it’s more secure and, more importantly, didn’t make me crazy. I generally enjoy 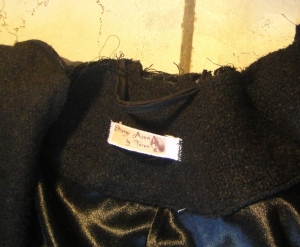 hand-stitching (especially to the dulcet and soothing soundtrack of my husband’s latest video game) but the catch-stitching inside the hem drove me nuts.

So the hem is hemmed and the lining assembled. I remembered (after forgetting in my last two coats) to add a hanging-loop, too, just some bias tape folded in half and stitched. Not the prettiest thing ever—perhaps I should’ve made one out of the lining fabric—but it will be functional. The collar is also sewn up and basted in place (as per Gertie), but I’m going to save those pics for the big reveal ;). I will say that the padstitching really does make a difference in how the collar sits (or rather, how it stands rather than lying down), although I bet you could skip the outer padstitching and just do the seamline and maybe the below-the-roll padstitching and get much the same effect.

Oh yeah, and clean the whole darned house because my father’s arriving today, not tomorrow, and the children have been running rampant for almost a week.