How many ways to bind a buttonhole?

Tyo’s coat is going to have bound buttonholes. There’s only four, surely I can manage that, right? I know the Lady Grey was supposed to be my gentle entry into the world of bound buttonholes, but, frankly, Tyo needs a winter coat more than I need a gorgeous-but-semi-practical-between-seasons jacket right now.

The plan was to make the lips of the buttonholes out of the lining fabric (a sturdy flannel-backed satin) rather than out of the bulky, soft, and flexible fashion fabric. This plan lasted until I actually did some trials, of which I’ll be speaking of shortly. But first… there remains the issue of METHOD.

There is a plethora of bound-buttonhole tutorials out there; I will list only a few 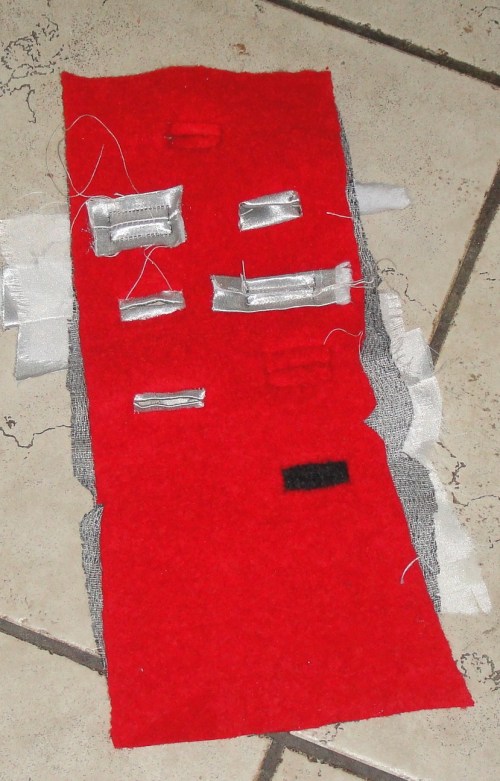 So, this afternoon, I sat down and experimented.

Now, as we all know, bound buttonholes, like welt pockets, are all about precision. Precision is one of those things I, ah, struggle with in sewing. I’m getting better, mind you—my cut pieces of fabric now almost always resemble the pattern they were cut with, I’m much better about getting my grain right, and I press as I sew quite religiously (which gets me a lot of exercise since I sew in the kitchen and press in the basement).

So you will not be entirely surprised to see that exhibit A, to the left, is, well, less than impressive. In part, the satin just wasn’t really working for me—it highlights the flaws, as it were, a little too crisply. (The satin for the final ones would have been the same fabric in black, but I have a ton of scraps left over from my winter coat lining, so I was using some of those. I did manage to achieve passable results with Sherry’s method, but still not to the point where I would be willing to put it in a finished garment (top centre in red wool, bottom left in silver satin). The slippery, fray-y nature of the satin didn’t help, either. Similarly with Gertie’s method. None of the others are even worth talking about (for this fabric and my current skills ;)… there are many sewists out there far more talented and precise than I!)

I had a bit more luck with using the fashion-fabric itself for the lips. It’s a bit more forgiving of my flaws. I was worried that it would be REALLY BULKY. It is. But, it looks softer. However, Sherry’s method is extra-bulky,  so it didn’t work so well with this method, either (centre top… which still looks better than any of the satin-bound ones, I suppose)). Gertie’s, however, did… with the caveat that it’s almost entirely hand-sewn. Only the initial rectangle was sewn by machine (bottom right two buttonholes, one in red, one in black).

This is pretty much par for the course for me. Precision=hand-sewing. I don’t really mind hand-sewing, fortunately (after hand-beading bellydance accessories, anything else is a piece of cake). Still, it would be nice someday to be able to be precise and speedy. Like, say, Sherry ;).

Ah, well. I showed Tyo the buttonholes and she likes the black contrast lips, so I expect we’ll go that route.

7 responses to “How many ways to bind a buttonhole?”