Skull Applique for the Monster's bag

Actually, I probably still suck at all embroidery (I haven’t tried any hand embroidery for a few years, but last time I definitely sucked. Oddly, it was on another piece using this same blue/black coating, too)

The Monster, AKA the ten-year-old, has been working away on her bag. Well, occasionally. When she’s not off camping or having sleepovers or watching her dad play video-games in the evening. Yesterday she managed to topstitch the strap and flap. Today I worked on the applique. I suck at applique.

I feel the need to mention, briefly, my introduction to machine embroidery. Not computerized machine embroidery, which I still have experienced only from afar, but the freehand kind. It begins with my mom’s sewing machine, a gorgeous Pfaff dating from the late sixties. This is the machine I learned on, and in its day, it was the shizznitt. It was an Embroidery Machine. It has settings for about a bajillion different embroidered stitches, all variations of the zig-zag, but every variation you could think of! Scallops, crenelations, triangles, blocks… the list is endless (or at least very long), and there is a large, circular plastic chart you turn to show the stitch you want and all the settings to get it. Width, needle position, number of stitches to motif, all completely adjustable. And the controls were actually far more intuitive than the ones on my much simpler modern Janome. Anyway, in addition to the chart, there was the manual, with extensive examples of things you could do with the embroidery stitches. Monogrammed letters, eyelet lace… I can’t even remember all of their suggestions. It was staggering. Everything was gorgeous.

Of course, nowhere in all of that did it say anywhere how hard it was to get them looking that nice.

Needless to say, I don’t think my poor little skull here would be appearing in that book. Or anyone’s book. But the kid is happy enough, so that’s ok by me. In hindsight I should’ve placed it much further down on the flap (I was 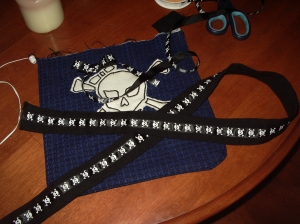 And, the strap, adorned with skull ribbon.

actually going for bottom-to-the-side placement, but the kid wanted it centred, and i moved it up too much when I centred it. So if the bag is full half the skull is going to be on the top. Oh, well.

I also used some of the ribbon from this splurge, finally,  sewing it along the strap. This is actually the first time I’ve adorned anything with ribbon. Not super hard (though I wasn’t particularly scientific about it). I still worry about putting it on clothes, though—would it shrink? Hold up in the wash? I am doubtful. On a bag, though… should be fine.

And that, except for hemming some de-cuffed pyjama bottoms for the ten-year-old (apparently they are totally uncool if they have cuffs, but just fine if they don’t), has been my sewing for the past few days. Bleh. Wasn’t I resolving to sew stuff for me?