I was thinking about when I started sewing (about nine) and the fact that the kind of  messing around self-directed learning that was the beginning of my sewing journey really isn’t my older daughter’s style (the girl doesn’t do anything unless it involves other people. Have you ever heard the phrase “they can’t stand their own company”? This would be my daughter.) But learning to sew with mom…

I suggested she might want to learn to sew on a bag. Maybe a messenger bag (she was ogling some out shopping this morning, but opted to save her money for an army-style coat instead). So we went scrounging, and shortly after downloaded the Diana bag pattern. Now if it were me I would probably just have made up my own pattern (really, it’s just some rectangles, right? I had probably been sewing six or eight years before I ever even looked at a pattern…) but she was really excited by the idea of a pattern. So we just spent an evening printing out the pattern, cutting and gluing it together (it goes nice and quick when you have someone else to do the gluing!), and then I sat her down at the sewing machine with (OMG!) no thread and paper. And started her sewing lines, lining the edge of the paper up with the 1.5 cm marking. And then some curves. I never thought I’d actually use the no-thread-just-paper method. It sounds so boring. Can you imagine anything dumber? But… it saves me thread. And she really is pretty bad at it. Impressively so. And she seemed pretty excited and intimidated by even just the paper, so starting right in on fabric probably would’ve been a disaster.  I think I’m going to mark the stitching lines right on the frabric, when we do get there. She was astoundingly into it, hyperventilating, panicking at the thought of her seams not being straight enough. Kid needs to chill out. But it was cute.

And then, of course, the seven-year-old had to get in on the action. I swear, those two can’t even look at each other without it starting a fight these days. School cannot start back up soon enough. (Yes, and I’ve only had them home for two weeks! Why do you think I send them to their cousins for July?)

This morning we finished laundering the fabric, ironed, and laid out the bag. She did about half the cutting herself; she really improved when we put some music on; I think it relaxed her.

In other news, Styling the Kasia!

I don’t do style or outfit posts much; they’re not really that interesting to me. But I’m going to burden you with this one because figuring out how to wear this skirt is such a mental stretch for me. I wore the Kasia out of the house for the first time today, styled as in the photos. I’m much more comfy with it with a shirt un-tucked. Yes, I realize that pretty much defeats the purpose of a high-waisted skirt. Sorry. Oh, and you can thank the 10-year-old for the edgy photography ;)… now I just have to remind her to include my head and feet in the photos.

The skirt is comfy and fun to wear, although I do have to remember not to take the stairs two at a time ;). 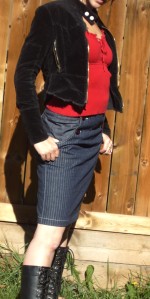 3 responses to “I’ve created a monster!”