Because I should be in bed right now, I’ll start working on a post about an older project.

In case you didn’t know (and why should you?) I’m a long-time hobby-level bellydancer (I did mention I have way too many hobbies, right?). The best part about bellydancing is how totally awesome it is, but the second-best part is the costumes. Dance costumes (and a few club costumes) were the first full-size things I tried sewing, in my late teens. One of the staples of bellydance costume is pantaloons—aka harem pants. By themselves for a more athletic dance or under a full skirt to show when spinning, they really finish off—and fill out—a costume. And the best part (for my neophyte seamstress-skillz—is they don’t require a pattern, really, at all.

My first pair of pantaloons

These are my first pair; I was 17 or so when I made them. I was totally digging the side slits. I always meant to jazz them up with some gold trim, and tack the side-slits closed in a couple of places, but I never did get around to it. The waistband was a rectangle. The cuffs were rectangles. The legs were two big rectangles with a bit cut out at the crotch. can we say simple? (though not AS simple as pantaloons can be… the absolute base-line would be just an elasticized casing at waist and ankle. Which brings us to my next major pair:

These blue satin ones were made from a pseudo-sari type fabric. Aside from the gold pattern in the blue, there’s a wide, ornate gold border on top and bottom (which of course you can’t really see at all in the picture). These are absolutely-basic harem pants: two panels, elastic casing at hip and ankle. And they were MURDER. Almost enough to get me to give up on sewing. I mean, it doesn’t get much easier than harem pants, right?

I knew the satin was ravelly, so I figured I would serge the edges of the pieces. I did. The serging fell off. I hadn’t heard of fray-check at this point, so I muddled on, ending up with some truly massive French Seams. It’s a good thing the fabric itself is so gorgeous, because there’s nothing great about the workmanship itself.

My most recent attempt at pantaloons was in a cream damask. These ones are easily my most complex pants to date. The fabric was a light upholstery weight, so bulky, and I wanted them HUGE. I mean, HUGE. The fabric was almost two yards wide and I used a full width for each pant-leg. (For reference, the blue pants were a metre width for each leg, ok maybe a yard after all the fabric I lost to ravelling, while the first pair were even less than that). To accomodate this bulk, I wanted to pleat the top onto a yoke, and I used another trick I’d read about on the bottoms: I gathered the ankles onto a smaller doughnut of fabric, and put the cuff on the inside of the doughnut. My aim on these was to have the inside be as nicely finished as the outside (my main issue with my costume-grade sewing), which I almost achieved. 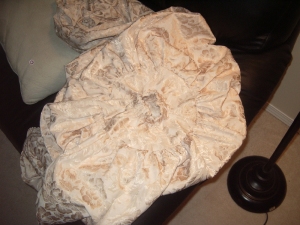 Maybe at some future date I’ll add more on my latest pair of dance pants, the rufflies…

5 responses to “Oldies but goodies: Pantaloons”