Apparently tenacity pays off. Today was my fifth (or something like) trip to a Fabricland within the last month. And I would’ve sworn I’d looked over every coat-weight bolt in the store. Apparently not, because today I discovered this: 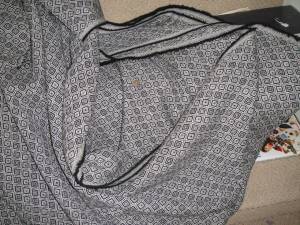 Tucked on a bottom shelf under a bunch of other stuff. Description: “Coating”; fibre: unknown. Regular price: $20.00, 50% off. Yes, I got the entire bolt for $10/m. It’s thick, warm, soft, doesn’t seem to ravelly. It’s not wool (no scratchy) but it’s nice, and the price was awesome. Only problem, as far as I can see, is that there were only 4.5 m left on the bolt, and the pattern suggests almost 5 1/2 yards… According to google, 4.5 m equals just under 5 yards. The cutter also usually gives a teeny bit extra every yard… so maybe there’ll be enough to make up for that last 3/8 of a yard. So we’ll see. Worst case scenario, I can only make the knee-length version.

In any case, it’s not quite was I was envisioning, but I think it will be just fine. A real wool would’ve been extra nice, but I’m not going to complain.

So I guess I should quit procrastinating on that test version… 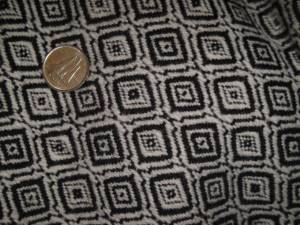