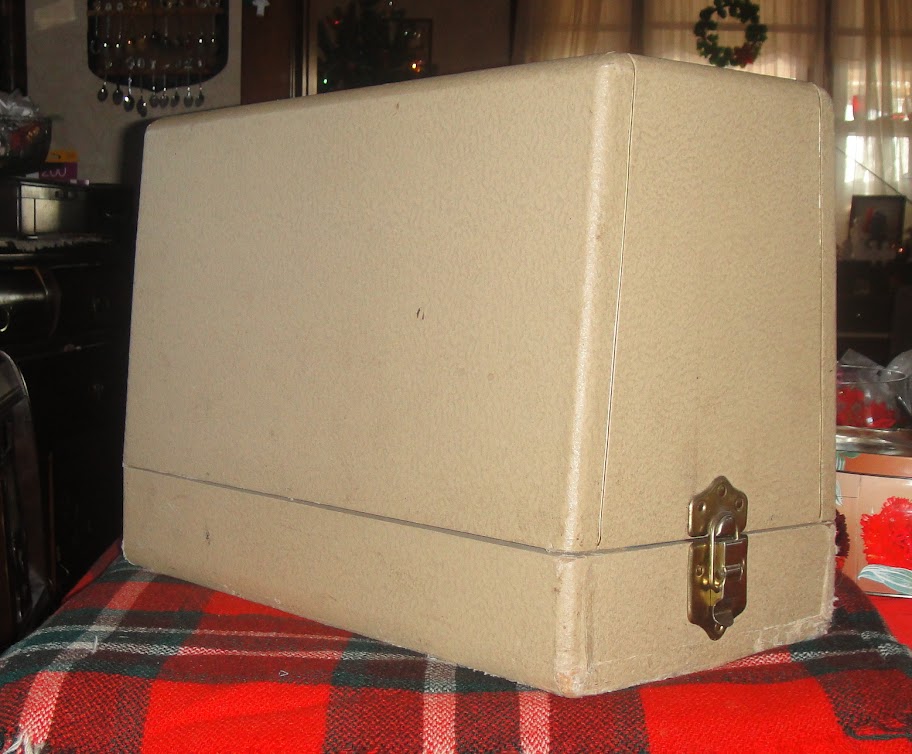 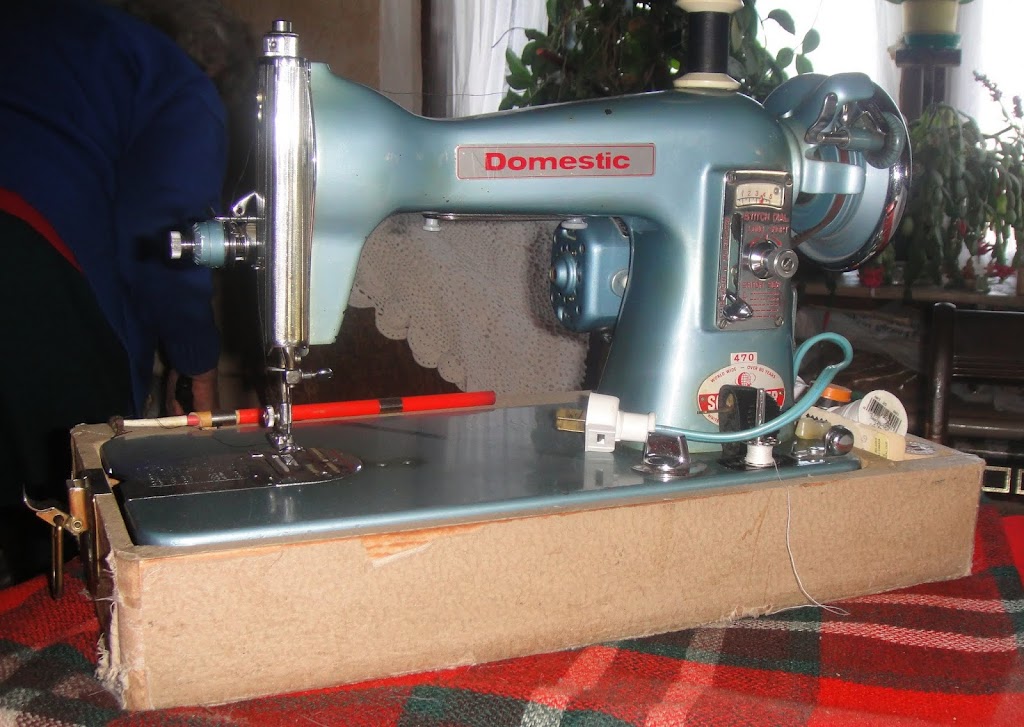 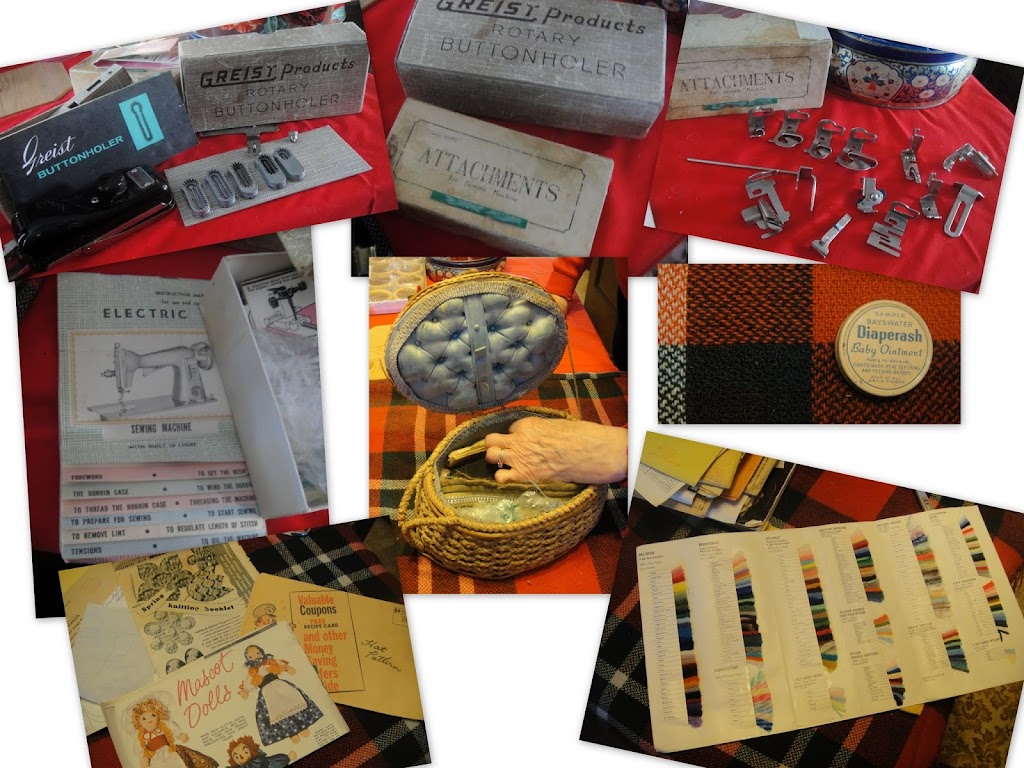 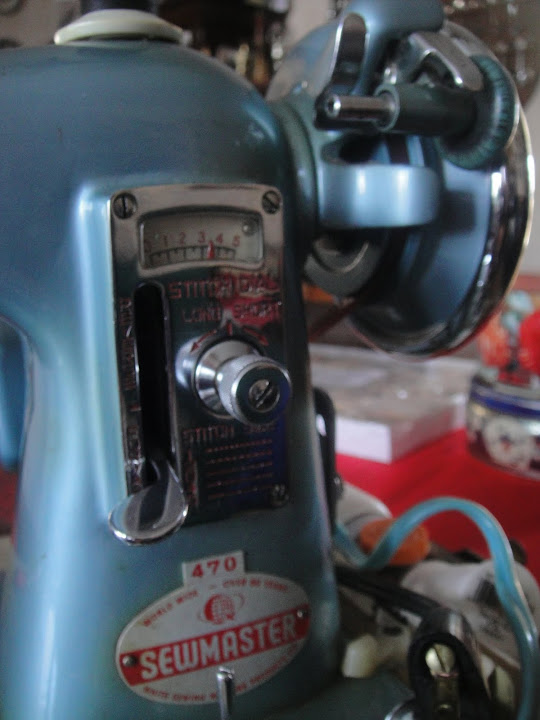 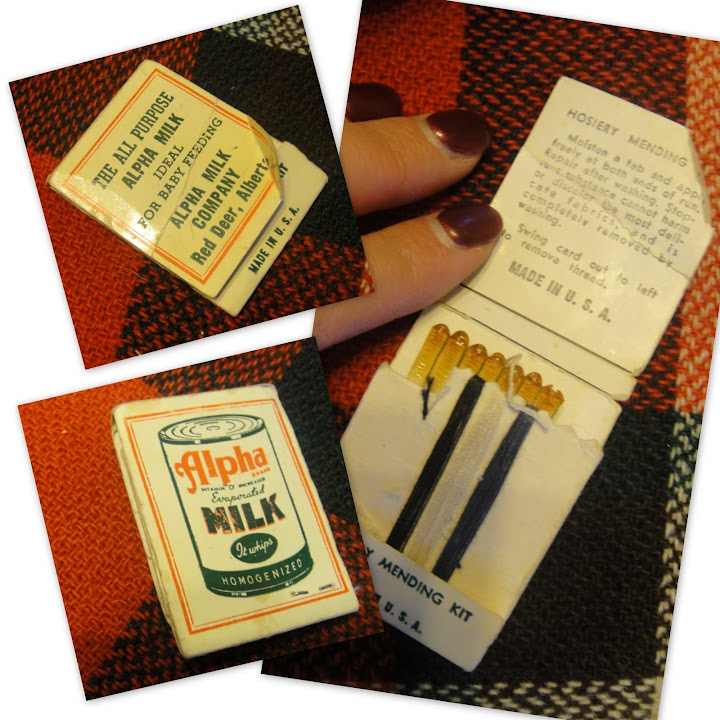 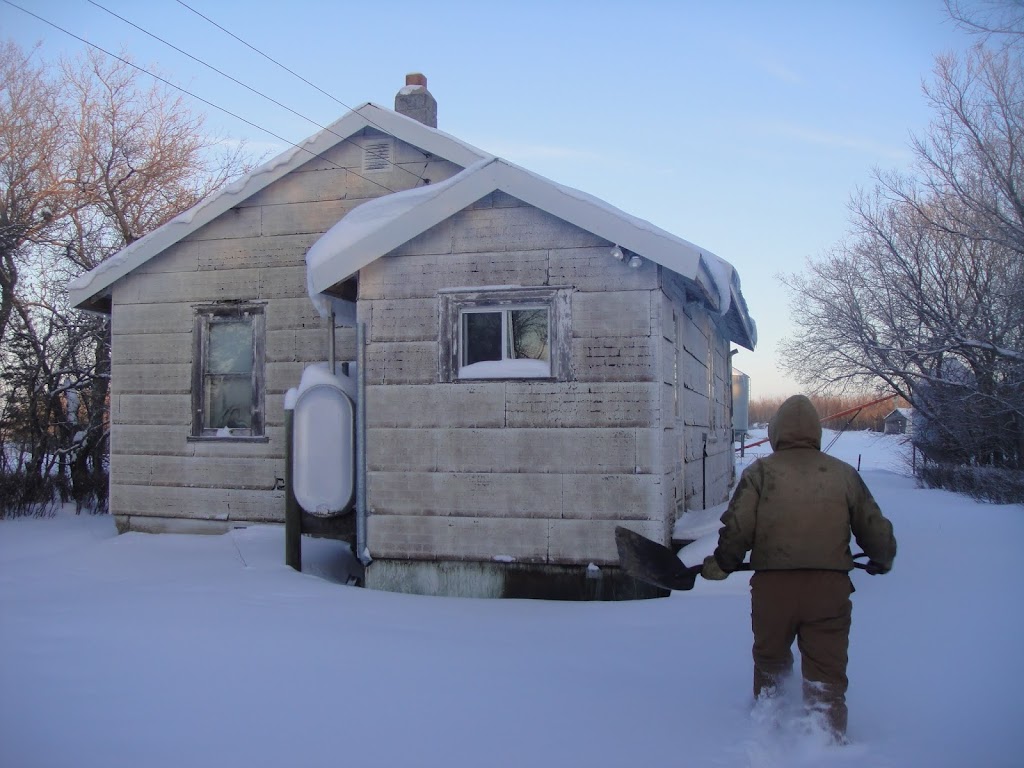 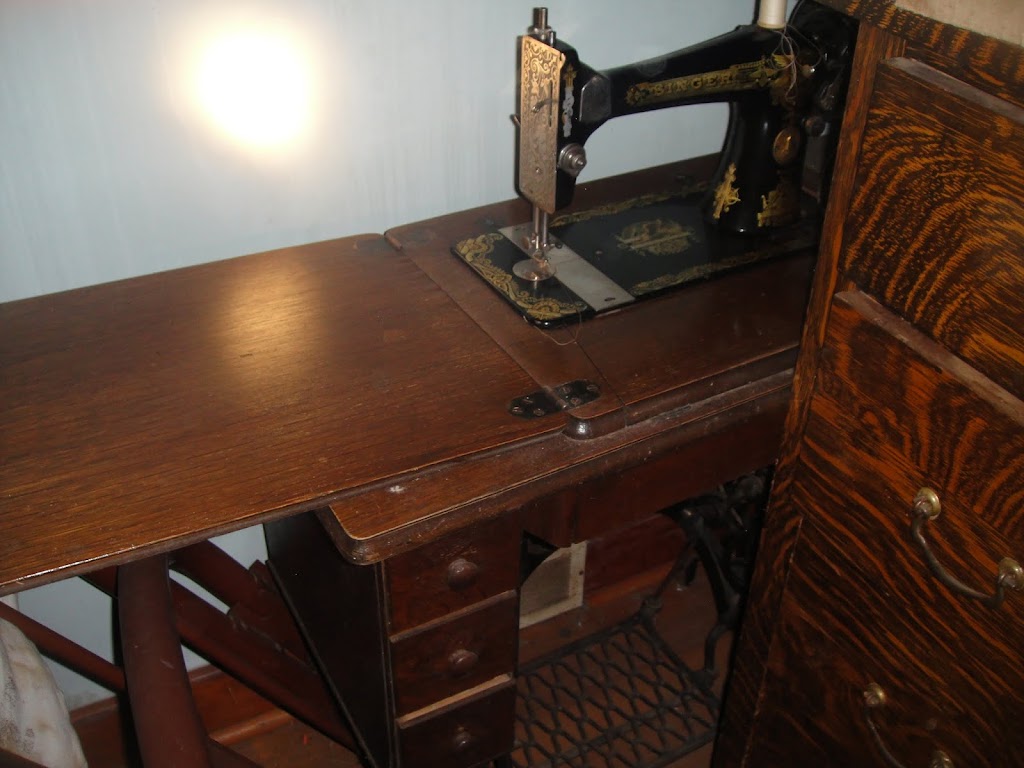 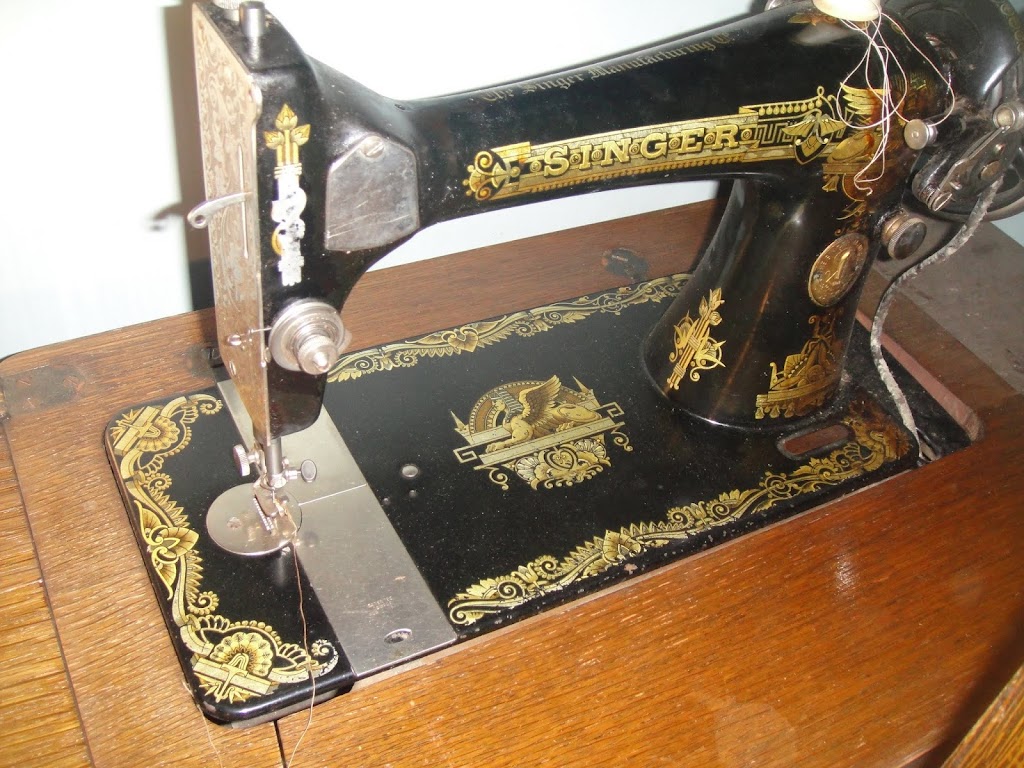 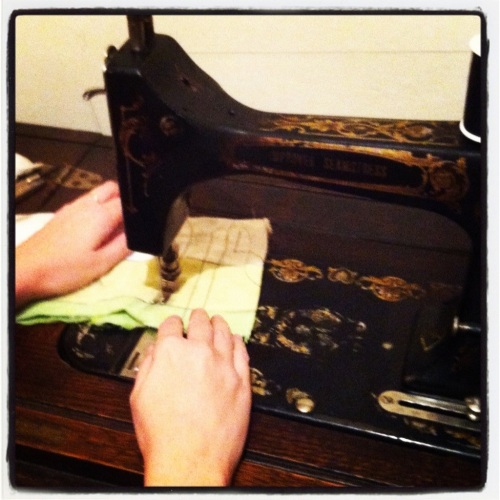 Ehm. I got a bit excited. The girls and I went to visit my mom again this past weekend, and I spent most of the afternoon upstairs playing with my treadle. Not the Singer (which belongs to Stylish), but the one my wonderful enabler mother bought me for my birthday.*

I gotta say, I can see how this treadle-collecting thing can become a problem. My mom’s boyfriend was mentioning one he saw in a pawnshop recently that had a cupboard-type cabinet, and I had to stomp very, very hard on the WANT. Bad want. Go to your room and think about what you’ve done. The electric machines were bad enough…

Anyway, I spent most of the afternoon ignoring my family and messing around with kerosene and oil and rags and an old toothbrush, and at the end of it all, when I should have been taking my kids home in time to have baths before bed, I threaded it all up and tried actually sewing with it. 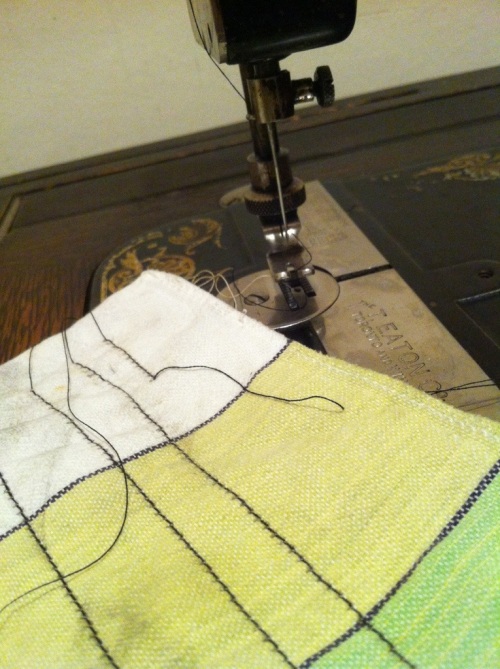 I didn’t have the almost-the-right-manual or any of the threading diagrams I’d managed to collect, so I was actually pretty astonished when I was 1) able to thread the bobbin into the shuttle, 2) put the shuttle in place, and 3) able to (half-assedly) thread the machine. I don’t think I’ve ever felt quite so triumphant about a sewing machine as when I spun the wheel the first time and was able to bring up the bobbin thread. Except possibly a few minutes later when I put the presser foot down and actually (by dint of careful handwheeling) sewed the first few stitches.

All is not perfectly well. I still haven’t gotten the faceplate off to clean in behind it. The tension is balanced but high (It’s also allegedly self-adjusting. I’m scared). The top thread tends to break, probably because there’s some sharpish bits in the threading (cheap, elderly thread doesn’t help). The needle is really, really big. They don’t use standard needles. There are about half a dozen in the attachments box that came with the machine, ranging from sturdy to harpoonlike. According to the NSMCO Yahoo group, you can usually use regular needles and just not push them all the way up… we’ll see. I made another “staple” to mend the broken belt, out of wire. It’s not quite as sturdy as the original staple, but it doesn’t seem to give the machine any problems. I used one of the already-wound bobbins, so I haven’t tried to wind my own yet. I am really, really lucky that this machine had bobbins and shuttle and needles with it, because I think I’d have a really, really hard time finding replacements. Note to self: always check if a machine runs, has bobbins, bobbin case, and needles. Well, if it’s not some weird old treadle you can probably skip the needles part. 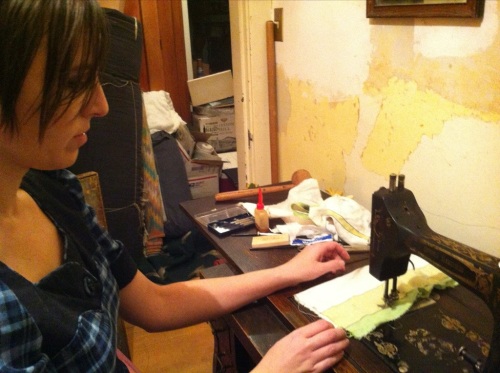 I am still not very good at treadling. I’m terrified I’m not going to get it “all the way over” (if you’ve ever treadled you know what I mean, and if you haven’t, well, if you ever try you will) and make the machine go backwards and then the Elder Treadling Gods will smite me.

So the other week I tried to get my Crafty sister-in-law’s old 70s kenmore zig-zagger running and couldn’t seem to get the needle position/threading right or something. It was pulling the kind of “I don’t want to make stitches” crap my Featherweight did when I had the needle in wrong way around, except that I tried every combination of needle direction and threading that I could think of. So anyway, the fact that I could get this old thing actually threaded and stitching kind of made my weekend. Yay me. 🙂

Now if only I could get the gunk cleaned off the outside.

In enabling news, Stylish bought herself seven patterns at the Simplicity $1.99 sale today. And I really will sew for myself one of these days…