Claire suggested, most sagely, that I make something quick and knittish as a palate cleanser after my recent detail-heavy exertions.  Of course, she was hinting I make up Zoe’s new “vest” pattern, which is indeed quite cute and tempting, but I decided to jump on the maxidress bandwagon. Ok, it doesn’t exactly take much to get me on the maxidress bandwagon. (see here, here… oh, and here.)

Yes, jealousy over Tyo’s Boredom Dress got the better of me, and I busted out Simplicity 7434, all the way from 1976. 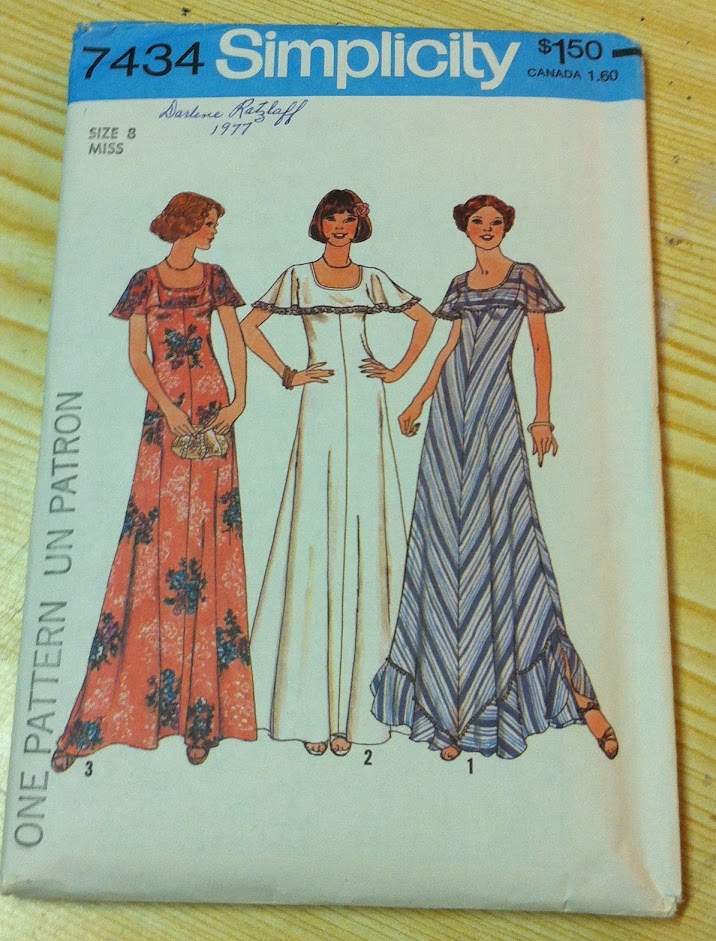 This pattern is part of the Ratzlaff Collection, a number of patterns I nabbed from the Mennonite thrift in my hometown, all of which bear the name “Darlene Ratzlaff” (except one which belonged to “Mrs. Art Ratzlaff.”) Most of them are from the late sixties and earliest seventies, and are a size 10 or 12. So I’m not sure why, in 1976 (or 1977), Mrs. Ratzlaff thought she should buy a size 8 pattern. Did she dramatically lose weight? Is it possible to lose weight when your culinary cultural heritage includes rollkuchen**? Did she have a daughter finally reach the women’s sizes*? Obviously we shall never know (unless I start telephoning all the Ratzlaffs in my hometown until I find the right one. Which would be amusing.)

This is designed for a size 8 bias woven. I am obviously not a size 8, but I thought it just might work in a knit. A quick comparison with my altered Renfrew pattern suggested that, in fact, the sizing was almost identical. KA-CHING.

From the envelope drawing (and even the technical drawings on the back) I’d assumed it was a simple tank-style pattern underneath the funny cape thingy. Not quite—it has separate shoulder pieces, meant to be cut on grain. I opted to cut them double and add a knit interfacing, so the shoulders are quite sturdy. Knit being knit, I cut the dress pieces on grain as well. The only alteration I made was to fold out a small (1 cm) swayback wedge from the back. In the facings-loving world of 70s patterns, this pattern calls for a bound edge on the neck and armscyes! Perfect, since that was what I was going to do anyway.

Y’all may recall that my comparable pattern, Renfrew, is recommended for a stable knit.

Stable knit, this fabric is not.

When I first tried it on, it was, in a word, tentlike. The only thing that wasn’t sagging and bagging was the (heavily reinforced) shoulders, which were sitting rather too far to the sides. Fortunately, there’s a CF seam. I took in the front and side-seams about 1″ each above the waist, tapering to nothing below, and on the back I angled in in my swayback region to take out 2-3″ of width, tapering to nothing below the waist. There’s still a little bit of room back there that I could tweak further, I think due to the weight of the skirt, but the side-seams are already tending to ride backwards and I don’t really want to take any more out of the front, so I think I’ll leave it, at lest for the moment. Fabric weight produced the gain in length I had expected, but didn’t see, in Tyo’s dress, so that it currently sweeps the floor unless I wear heels. I may have to trim it for practicality, but I’m liking the extravagant length for now.

The neckline seemed a tad bare when I first tried it on, so I added the raw-edge bow (click through to the full size photo if you can’t see it… it’s there, I swear). I was sort of hoping the fabric would whirl itself into tight curls when stretched and stay that way, but alas, no dice. If I decide I really want a skinny stringy bow, I’ll make and turn some tubes, but I think I’m ok with the raw edge. The hem is raw, too. It has a fabulous flow and drape and, as observed with the bow, no significant tendency to curl.

Of course, all of this has been completed just in time for the end of our glorious week of summer weather (I might’ve had better pictures if I’d been willing to stand outside for more than thirty seconds…). Will summer and +30C tmeperatures return? No telling, this close to the mountains, but I fervently hope so. A few solid weeks of heat like that and I might actually be able to face the inexorable return of winter.

*Tyo is feeling very fashionably frustrated right now. Nothing in the children’s racks appeals to her, but the women’s sizes are still mostly too big. The exception is the very smallest of the size 0/1 jeans, of which she now has several pairs, although unfortunately they don’t have the handy buttonhole elastics for cinching in the inevitable above-butt gapage that is her genetic heritage. Probably I should look into that alteration. *wince* I have a few junior teen patterns, but they’re mostly from the 70s and while I think they’re adorable, they’re not quite the current zeitgeist…

**my stylish sister in law is married to a Mennonite, and has been learning to make rollkuchen. Nomnomnom…