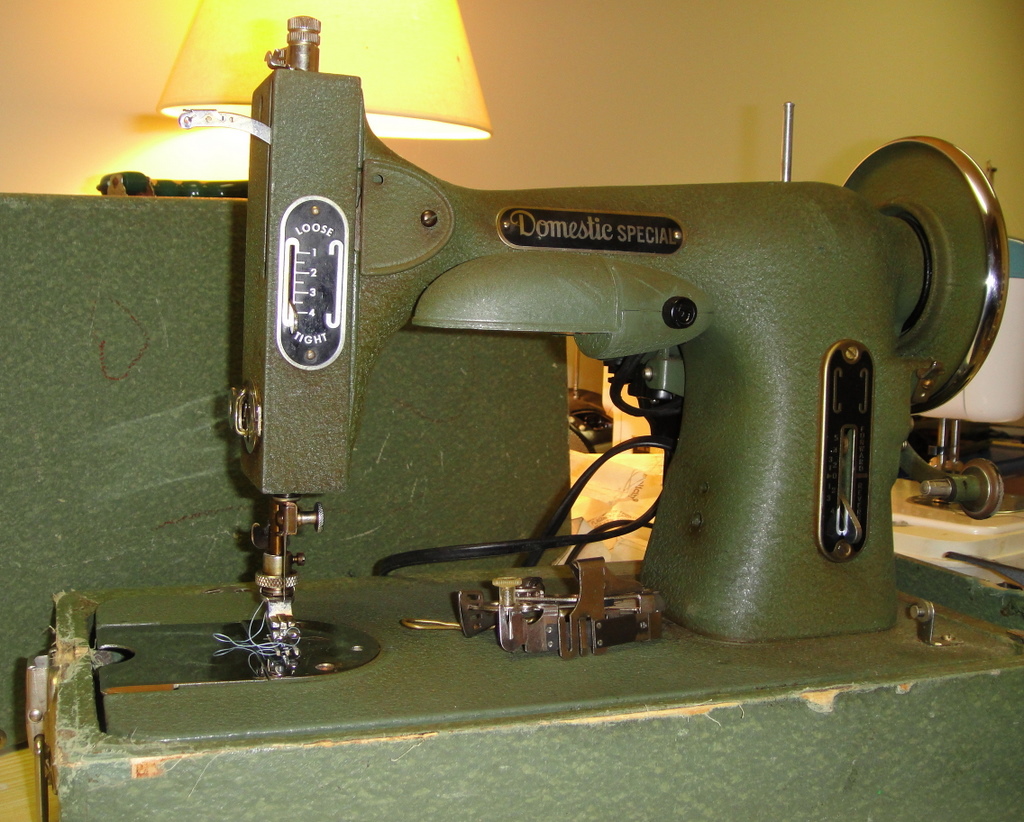 The Rolled Hem Foot—Devil or Divine?

It’s no secret, I think, that the rolled hem foot is one of the more frustrating of the assorted sewing machine attachments out there. Particularly since at least one is included with every machine I’ve ever seen (And if your machine didn’t come with one—well, not sure if I should offer condolences or congratulations on a bullet dodged 😉 ). (Above is the selection of hemmers that came with my vintage Domestic straight-stitcher, hence the weird clamp style foot. Most of the ones I’ve used are on the narrower end of things.) The basic idea is simple—the curls of the foot guide the fabric up and under itself, making a neat, narrow little hem without you, the stitcher, having to measure, press, or otherwise futz with the fabric. The practice, alas, seems to be the problem.

If you are a past-master of this particular, frustrating little foot, please chime in with your secrets—I’d love to hear them.  Because I have a few tips, but definitely no miracles to offer.

I was totally intrigued when I first found this foot among my mother’s plethora of attachments (I was probably ten). Needless to say, my early experiments were not a resounding success. Not that Barbie minded much, fortunately.

I too a stab at the foot now and again through my long-but-indifferent costume-sewing career. Mostly without significantly improved results. The fold wouldn’t form, or it would but bits would stick out; it lumped and bumped and was generally inconsistent, since my cutting was pretty inconsistent, too.

I can count on one hand the number of really awesome hems I’ve gotten with one. Actually, scratch that. I can count the more-or-less-adequate-acceptable bones. There aren’t any totally flawless awesome ones. But frankly, with this foot, I feel pretty darn proud of even achieving “adequate.”

My first “breakthrough” in the use of the rolled-hem foot came while making a tiered skirt for tribal bellydance. I’ve been meaning to do a post about these skirts for ages, but haven’t gotten around to it.  I used the hemmer foot to hem the five zillion miles (ok, actually only about 25 yards) of the bottom tier. This is actually an AWESOME way to gain skill (or something vaguely approximating it) with this attachment, because it’s lots of practice and after the first yard or two you really stop caring. And the edges are perfectly straight and ripped, which is relatively easy to maneuver (although the ripped threads may stick out). The only tricky part (as usual) is going over the seams, and like I said, after the first few, you really stop caring.

More recently, I discovered in making the Sheer JJ blouse, that it’s much easier to get a nice hem if you zig-zag over the little roll.

This isn’t great for all hems, as it makes a somewhat stiffer edge, but if you want a lettuce-edge or a perky ruffle, it’s a great, easier finish.

And now, I’ve managed to (semi) successfully apply a rolled edge to the hem of my friend’s Ruby Slip. So I’m really kinda stoked with myself.

Shut up. I’m calling it a win.

Now, first off, I did not do this blindly. I took some extra fabric and I sampled and sampled and sampled. Between my various machines I have several rolled-hem feet to choose from, and I tried LOTS. I wound up using one of the zig-zag machines, because I could adjust the position of the needle to be in the right spot to catch the inner edge of the roll. I opted for the narrowest hemmer of the Pfaff’s feet, which is very narrow indeed. And, miraculously, I was able to get a really nice, insanely narrow hem around about 90% of the hem. I still made a hash of the seam-crossings, and yes, there are a few areas which aren’t fully curled, but really, I’m still pretty stoked.

In some ways, the fine, bias fabric was a blessing for this kind of hem. It was easy to cut smoothly (no jags) and the bias doesn’t fray much, which also helps a lot. On hems like this, even tiny stray threads can be a problem. And, although the slippery bias was a pain to get started, it was also easy to adjust as I went, keeping the hem even.

Rolling the hem. I wish I could get a picture of how I *actually* hold the fabric, but that takes two hands.

For the sake of those of you who are more like me—generally frustrated beyond belief by your frigging’ hemmer foot—here are my tips, for what they’re worth. Please chime in if you have your own!

Using a pin to poke the seam through.

Even after all that, I can’t really say that the rolled-hem foot is the best method I could’ve used. Probably I could’ve done as well, maybe even better, using Sherry’s baby hem method. And yet I persist with the rolled hemmer, just to say “I tried.”
My previous comments on the rolled hem foot did bring out a few lovers along with the haters:
Anne and LinB, both of whom appear to be blog-free (but if you’d like a link somewhere, please let me know!), recommended stitching with the fabric held up from the bed of the machine. I will totally be giving this a try next time the insanity seizes me (I do still have the Ruby Blue to finish…)
The Perfect Nose loves her rolled hem foot (I know, I want some of what she’s on 😉 ) and uses it for seam allowances, which had never even occurred to me but is a great idea if you’re trying to do that fold-over finish! Of course, hers came with an instruction manual. Yeah, instructions, pfft! 😉
Got your own story of rolled hem disaster or conquest? Or another great tip?
Like, maybe, don’t even try? 😉