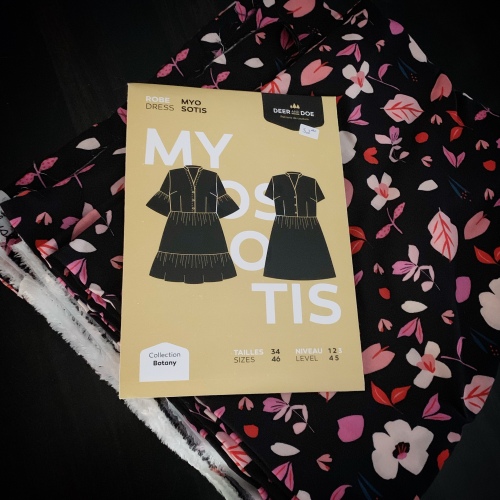 I’m never exactly on the cutting edge of indie patterns, so everyone and their dog has already made the Deer and Doe Myosotis dress, mostly last summer. If it weren’t for all those versions I probably wouldn’t’ve been drawn to it, because it’s a lot of ruffles and a pretty squat, shapeless look on the face of it. But somewhere in the midst of conversations on Instagram last winter with Grace (@wzrdreams) about our shared nineties nostalgia, I realized that this was a really good base for a revisit of my much-beloved nineties babydoll dress. So, I suggested it as the basis for a Periwinkle Sewing class (running in August). We’ll see if anyone actually takes it, but at least I got a cute dress out of it.

Now, recreating that dress (why did I get rid of it again?) isn’t exactly what I’ve done here, but I am pretty happy with the results.

I went with the ruffled skirt but not the sleeve ruffle. I cut the size 40, and added ties because I wanted the adjustability they provide in a loose style like this. The only change I made to the pattern was actually to shorten the (already raised) waist just a bit more.

Partly because I have a short waist at the best of times, partly for that babydoll look, and partly for the big ol’ maternity belly. In hindsight I should’ve probably lengthened the skirt to compensate, but oh well. It’ll be a good length once it doesn’t have to stretch over the twin belly.

The construction is pretty simple and this is really the easiest take on a shirtdress I’ve run across—and if you’re feeling lazy (which I was since I’m pretty exhausted these days) you can even skip the buttonholes and just sew the buttons on the front through all the placket layers. Although I’m already regretting that as it will limit the nursing-friendliness of the dress, so I’ll probably take the buttons off and put in proper buttonholes at some point. They’re not necessary for putting on and taking off the dress, though.

Hmm, pregnancy seems to have deleted my hips. The dress form shows the back view a bit better.

I also love that it has simple inseam pockets included. I’ve been regularly adding them to dresses in my classes, but it’s nice to not have to guess about it. 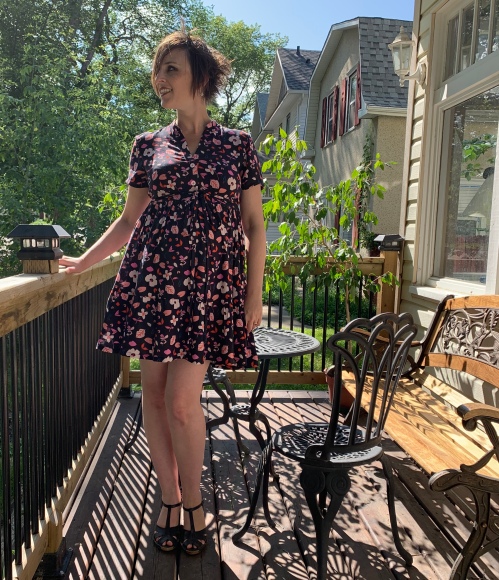 My mother found this cute little cast-iron chair and table set at an auction earlier this summer, and my father-in-law repaired and refinished the amazing bench. So now I’m having fun pretending that my front deck is a chic Parisian balcony overlooking a sophisticated French street.

I tried to take some closeups but this print absolutely eats detail, so they don’t look like much. I’m a fan of the “crushed gather” look, so all the gathers got pressed into crinkly minimalism. The amount of fullness in the bottom skirt ruffle is also minimal, which is good. I love how it gives the skirt just a bit of shape.

Now I just need some fancy coffee or something to sip while I look cute and sophisticated. Or at least cute.