I am tired (and other reminiscences)

But victorious. Children arrived, milled around, played, ran, jumped on the trampoline, scraped elbows and knees, bumped each other jumping, got splinters, roasted hot-dogs, opened presents, lined up (!) for ice-cream cake, and  eventually were reclaimed by their parents (even the ones who slept over and were claimed this morning). I am SO thankful for the two friends who stuck by me through it all, and as a bonus the hubbykins was able to get off work a bit early so arrived in time to oversee the present-opening and cake-eating. The sun was warm although the air was cooler (high of 18C); water-balloons were tossed around but I managed to fend off the suggestion that the sprinkler should be put on under the trampoline.  Oh, and Tyo got a hedgehog.

Tomorrow is Syo’s actual birthday. Which means that the photo above was taken eight years ago today. I was having teeny-tiny contractions at ten-minute intervals all through the photo-shoot, and remember wondering if that meant real labour was imminent or if it would just go away on its own. It was still a good ten days before my due-date, but that’s longer than I was pregnant with Tyo. I made the purple choli (cropped shirt) I am wearing and the belt, although you can’t see much of that but the tassles. One very artistic friend drew the designs on my belly in eyeliner and lip pencil. 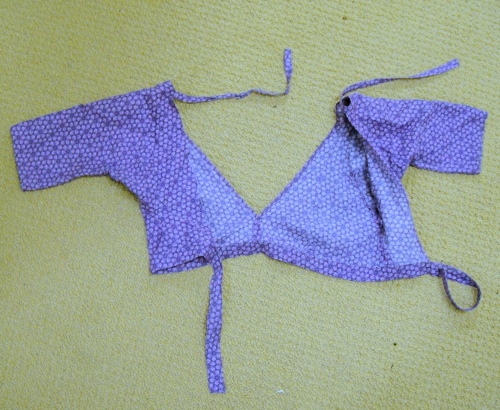 My sewing back then was what I’d call “costume grade”—functional, occasionally fancy, but largely devoid of seam-finishes and other fine-touches.

Unfinished seams, showing sideseam including underarm gusset. I did a decent job on the bottom ties/binding, though.

The pattern I used for this was essentially an early version of the one now available from Folkwear, although my A/B cup version lacks the bottom triangles, relying on the magic of bias stretch to fit around the bust. In more recent iterations I adapted it into a full princess-seam in the front, but this version has a straight  over-bust seam. This wasn’t the first choli I made, but it might be the second or third; I had learned (the hard way) to be careful of the bias-stretch on the front neckline and to double-fold my hems at neck and sleeve. I think the fabric was left over from a project I helped my cousin make; the rest of the remnants had become a self-drafted jumper-dress for Tyo, which included a facing (I had never done a facing before).

I thought I’d show you a better photo of the earrings I wore the last couple of days, as they’re hand- made (by my mother, granted, not me). The little man is an antique ivory figurine my mother had kicking around forever (I wonder if he originally had something decorative in his navel… the hole in his belly-button is quite deep, but doesn’t go all the way through.) Then in the late eighties or early nineties some family friends returned from Zaire and gave my mom the malachite elephant. This was around the time when everyone was making beaded jewelry (I’ve commented on my mom’s serial crafting before),  so it seemed only natural to hunt down a couple of other beads and create our African earrings. I remember discussing with my mother how the long bone and the round malachite bead echoed the  respective shapes of the two pendants. I miss bouncing design ideas around with her—we used to do it about everything, from clothing to jewelry to the arrangement of furniture in the house. I hope I can have those kinds of conversations with my own daughters soon enough.

Anyway, I should now return to cleaning my house, so that Syo and I can make biscuits (scones for the British readers) and maybe even get started on the teachers’ presents. My kids have between them five teachers who need presents. They’re all wonderful ladies, but it still seems a bit excessive to me. It’s not like they’re middle-schoolers with a teacher for every subject.

Tagged as jewelry, Me-Made June, oldies, too much talk