This petticoat is in clear and present violation of the mission I set myself when I began this blog, which was to create clothing that I would wear on a daily basis.  At the moment, it will join several other cream and lace pieces in the side of my closet that holds the “fun clothes”. Y’know, the old clubwear, goth gear, formal attire, stuff that gets an airing once or twice a year at most. (This doesn’t even count the actual dance costumes, which are all in the basement.) The best I can hope for is that its presence will spur me to create some circle-skirts or things of that nature to wear it with. Once, y’know, it stops being winter. Well, serious winter. Skirts can still be worn in mild winter, but it takes greater fortitude than I possess to wear them in real cold.

So, construction. Erm. I had, y’know, mentioned Sugardale’s tutorial. Which is a great tutorial. I used, well, the part where she uses ribbon to cover and finish her seams. 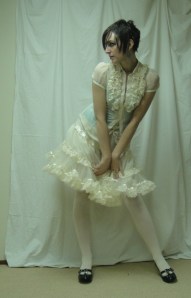 Then I looked at my tulle, which I knew I wanted to be the bottom tier. I had enough for about four 8″ strips, each about 2.5m long, I thought. Which would give me enough for 10m on my bottom tier. It didn’t seem unreasonable as Sugardale suggested 8m for the bottom tier. (A basic tiered skirt for tribal bellydance is a 10-yard skirt, that is, like mine, it has 10 yards/m at the bottom. Yes, I know that a metre is longer than a yard, and the difference adds up to quite a bit once you have 10 of them. Hush, this conversion is the least of my problems. Of the two full-size ones I’ve made, one is about 22 metres at the bottom, the other is probably around 40-some… it is very, very, very, very full)

To start I edged the bottom of the tulle with ribbon and my “new” gathered lace. This took forever. The key to tiered skirts is to always start with the bottom tier—not only is it easier, but you will never have the stamina for that massive tier if you start at the top. Once I had the lace attached, I realized that my tier was more like 14″ than 8″.

So I decided to fold it over and have a double-length for the bottom. Extra fluffy!

Then, I broke out the ruffler foot.

I have mentioned this contraption briefly before, but I don’t know if I’ve ever gone into the full, detailed complexities of my relationship with this particular sewing machine foot.

To begin with, it is, quite simply, the most terrifying foot concoction imaginable. I suspect that those vintage buttonholer attachments are more frightening in their inner workings, but at least they tend to have it all neatly contained within that plastic casing.

Once you figure out how to attach the ruffler foot to your machine, it’s actually relatively simple. The up-and-down motion of the needle drives a sharp bit of metal back and forth, causing fabric threaded through a particular part of the foot to bunch up. How much it bunches per stitch is controlled by a little screw; another little lever adjusts whether the gathering takes place on every stitch, or only once per so many stitches. This means you can technically use the foot for making pleats as well, and control your gathering ratio quite precisely. Fabric tension and stitch length also play a role.

In practice it is… fiddly.

Now, I first wrestled the ruffler foot on my mother’s machine, which, I have

come to realize, is a prince among ruffler feet as well as a prince among machines. With a certain amount of experimentation I determined the settings I wanted, and, based on a foot-long sample, figured I had the ruffle ratio set to 2:1.

When I finished ruffling the first tier of my first tiered skirt, I realized the final ruffle ratio was more like 4:1. As a result several of the nine tiers in that first skirt (never let it be said that I’ve shied away from complex projects!) have no gathering at all. Still, I managed to pull the skirt off and was quite thrilled with it. Here’s a pic in action. And anything beats trying to hand-gather 40m+ of fabric

When I moved away from my hometown, my mother generously bought me my sewing machine as a going-away/Master’s degree present. The one attachment I requested was a ruffler foot to go with it.  As I discovered when I made my second tiered skirt, the differences between a vintage, quality attachment and a cheap modern generic version are subtle but substantial. The metal is just that little bit thinner, the edges sharper (which tends to cut fabric and threads when things get the least bit out of alignment. And something about the vibrations it generates (maybe because they aren’t anchored by the massive weight of my mom’s old machine?) makes things come loose. Like the needle. Or even the whole foot (at the part that screws on to the leg, not the little snap-on part). I’ve never been able to make my ruffler foot do anything other than gathers, and the control on the amount of gathering is rudimentary.

Apparently in tulle, it’s nonexistent. To ward off the machine’s tendency to eat the tulle, I gathered it to a length of ribbon. Once I figured out how to arrange this properly it wasn’t so bad, but for whatever reason the stitch-lengths were minute, and completely insensitive to my twiddling with the set stitch length. So instead of gathering at a nice 2:1-or-thereabouts ratio, it gathered my entire strip of doubled tulle into just over 2m. Not the 4-5m range I was looking for.

I had originally intended to have the top tier be about 2m, attached to an elastic casing of similar size. Obviously not going to work when I need at least one more tier in there. 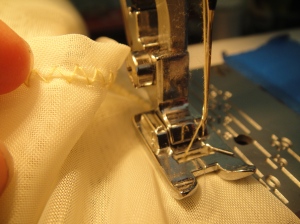 A completely inadequate attempt to demonstrate this gathering method.

So I made a second doubled tier, in the hopes that it would fill out the second tier a bit above that crazy-full bottom tier, added more lace, and used the zig-zag-over-supplementary-thread method to gather it. This is the absolute best method available (to me) for gathering moderate to large amounts of fabric where you still need a fair bit of control over the ratio. (The ruffler foot is wonderful for doing the gathering for you—evenly—but limits your control. Or my control, anyway.) Note: I don’t have and have never used one of those “gathering feet” so I can’t compare. Maybe it would kick my method’s butt. Anyway, all you do is zig-zag OVERTOP of another thread (I like to use dental-floss), and then afterwards gather up your other thread/floss; the zig-zag acts as a kind of casing. Unfortunately, on this sheer fabric I decided to try using a clear monofilament-type thread for the supplementary thread, since the only dental floss we have right now is the psycho-expensive stuff the kids like and I’m not using that for sewing. While it works fine, it’s too slippery, so the gathers slide around and don’t stay put as well as I’d like. Only exacerbated by my fabric, which for the upper tiers was this godawful poly-chiffon stuff that I scavenged from my step-brother-in-law’s wedding decor summer before last. It’s the same fabric in the ruffly sheer JJ.

I really liked using my smocking-stitch on top of the ribbon when securing the seams. It gives it a nice, lacy texture, as well as finishing everything off nicely.

I’m realizing belatedly that I should’ve gotten more close-ups illustrating the way the tiers are doubled, which is a little nifty, if I do say so myself, but it’s late and this post is already hella-long and I’m too tired to bother right now. Sorry :(. Also, do you note the total lack of my vintage lace on the finished project?!? I didn’t have enough for the hem yet I didn’t want to attach it higher up where it would never, ever show. So now I don’t know what to do. Maybe save it for finishing a skirt lining that would go over the petticoat?