I massively enjoyed following the #nofearjeansmonth and #nofearnewjeans hashtags that Closet Case Patterns coined for February. I like to think of myself as one of the “first generation of internet jeans sexists”, having made my first pair as part of a Pattern Review hosted sewalong in the spring of 2010. Jeans were a staple of my wardrobe at the time, and being able to make my own revolutionized my mindset. Also, they were fun to sew. I even wrote posts full of helpful tips.

But in the last eight years, something changed. Partly, as I transitioned from grad school to the workforce, I got to indulge my love for stunt dressing more. This has always been a recurrent theme in my life, but it went particularly well with working at a fabric store, and even my eventual “grown up job” was a good venue for overdressing. I just wasn’t wearing jeans, except in my downtime, and there isn’t much downtime when you’re working two jobs.

But something else was going on in the background, too. Those jeans I had loved just weren’t working for me any more. Partly I gained a little weight, but even the ones that fit weren’t making me feel sexy any more. As I crept further and further past the thirty mark, as my skin elasticity changed… what I wanted in my jeans was changing.

Some of it is undoubtedly the cultural zeitgeist. Low-rise jeans, always controversial, had had their day. But I’ve never been a slavish follower of fashion and I’m not quick to change when something works for me. But my low-rise jeans were no longer working. 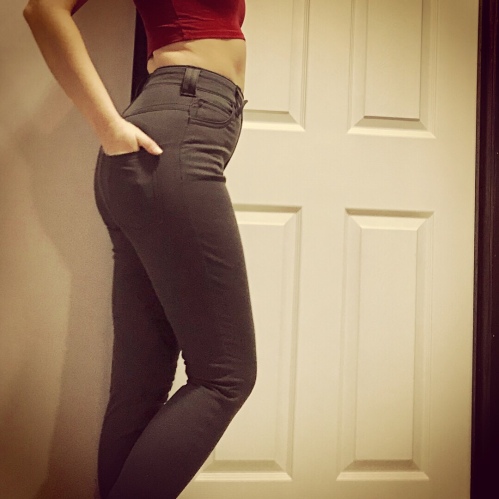 Enter the high-rise Ginger jeans. I’m not convinced these are working for me, either, but I’m branching out, testing. Seeking.

Compared to the changes I made to my Jalie 2908 pattern to get it to the style I wanted, the Ginger Jeans are a much better starting point. Actually the other view (low rise, straight leg) is why I originally bought the pattern when it first came out—it nailed exactly what I had modded my Jalie 2908 into. Of course, it was much easier just carrying on with my modded version than tackling a new pattern, so I didn’t. Until I was finally ready to try something different.

For this high-rise, skinny version, I made minimal changes. I added a wee bit of height to the back (possibly unnecessary), and angled the rear seam a bit more. I also had to take in the side seams, a LOT, but this is a very, very stretchy denim.

I did my pocket placement more or less as the pattern directed (I think) and I’m not super happy with it. They should be slightly higher and much closer together. (The closer-together part has a lot to do with the extra-stretchy denim, though)

This denim was a mystery fabric, so while I like the weight and stretchiness, I don’t trust it. But I think it cost me $4.00/m, which made it perfect for a wearable muslin.

To make sure the waistband didn’t gape, I actually eased the back yoke onto a smaller portion of the waistband. This worked pretty well. I also interfaced only the front half of the waistband—I’ve gone back and forth on this over the years, as it’s kind of a trade off between comfort and stability. I’m pretty happy with the half-and-half, at least at this early stage.

I topstitched on my new-to-me Elna, but I chose to use two extra-strong threads in the needle, and it was kind of a nightmare. Lots of snarling and refusing to penetrate, not to mention skipping stitched at corners and things like that. Eventually I gave up and dropped to one thread, and just topstitched twice all around the waistband and hems. The effect is better than I would’ve gotten with the two threads. So, next time, we won’t do that. I’ve also been experimenting with using Coats’ newish Eloflex thread in the bobbin—it’s stretchy, so hopefully less likely to snap in high-stretch areas than regular thread in the bobbin. I’m hoping, anyway. We shall see.

The Ginger pattern suggest you add a bit of interfacing at the top of the pockets to keep them firm. I gave it a try, but at least in this super-stretchy denim I’m not a fan—the less stretchy pocket rim makes a dent across your butt. (Though having worn them a few times since the photos were taken, I think they’ve stretched out a bit.)

So does the yoke seam. This is partly because the denim is so stretchy, while the seam is stable, and I think the position of the yoke line (the yoke is pretty tall on this pattern) emphasizes it. According to @wzrdreams on Instagram, who is a pattern smarty-pants, cutting the yoke on the cross-grain can help with this and I am totally going to try that next time. Though this particular denim has lengthwise stretch too, so it might not have helped so much. Anyway, wearable muslin.

The only real fit change I would make next time is scooping out the front crotch curve a bit—it’s a tiny bit camel-toey on me. 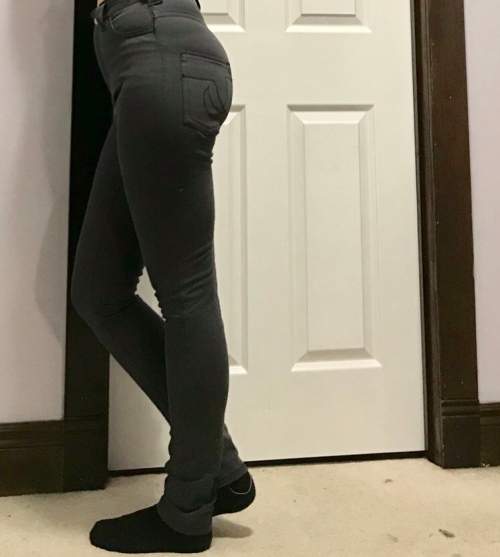 They’ve relaxed a bit after a day of wearing and I think that’s helped the fit, which is good. And they’re already letting me experiment with some wardrobe pieces I haven’t been getting much use of lately—mainly shorter tops—so that’s exciting. And the weird charcoal colour goes with some other things in the wardrobe which gives me some new colour combos to play with. So, I think good? I think?