A tale of terror, tailoring, and tragedy. 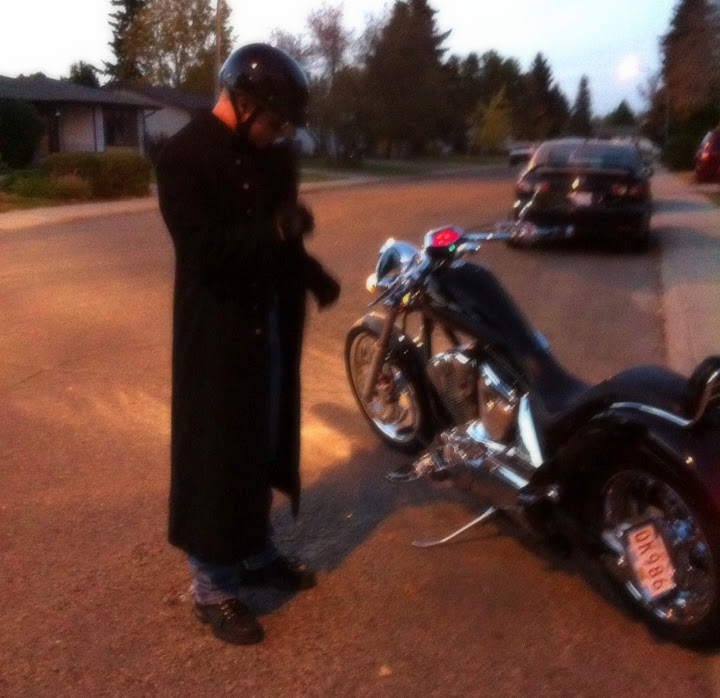 Okay, I’m no good with suspense. I need to get this over quickly. I finished Osiris’s frock coat.  This is what it looked like Friday evening, as we headed out for a night on the town. 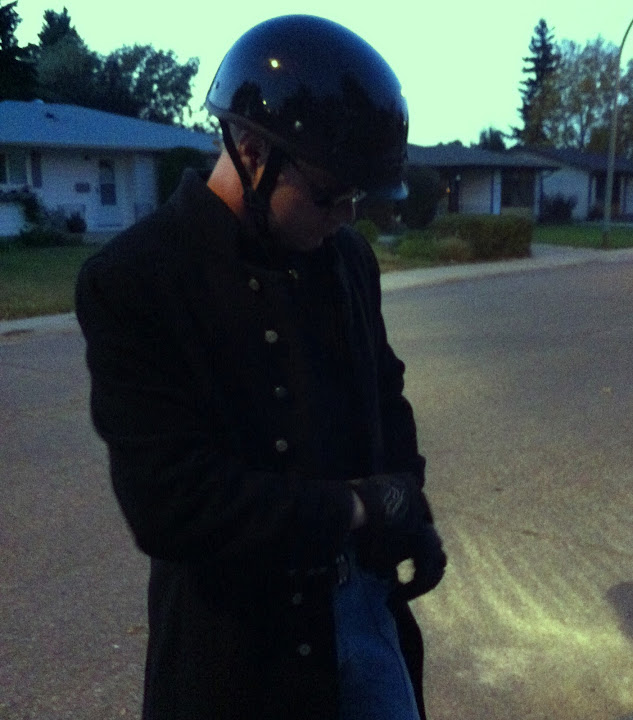 And this is what it looked like Sunday afternoon…

END_OF_DOCUMENT_TOKEN_TO_BE_REPLACED

Just in case you’ve forgotten (I nearly have), this is the coat where I try to turn this pattern:

Christopher Walken in The Prophecy

I made two muslins, and extensive alterations—more for freedom of movement than fit per se.

And I would’ve sworn that the best things about both muslins was that the shoulders FIT.

Well, I tried the shell on Osiris and the shoulders are huge. I honestly couldn’t tell you anything else about the fit, I couldn’t see past the massive, sloppy shoulders.

Yes, the shoulder-pads were in place.

I’m not quite sure what’s going on. There is a lot of room in the back (as per his demand), but that’s not the issue. It’s like the shoulder point has expanded. Which it shouldn’t be able to, right? I’m hoping some re-adjustment of the pads/sleeve headers will help the issue. The armscye also seems low, where I swear the opposite was going on in the muslin. This may be a difference between firm sheet and soft (ish) wool (ish)?

The easing of the back to front shoulder also didn’t go super-duper well. Too much to ease, not enough wool content in the fabric, and I couldn’t find my tailor’s ham. (Also, way-overexposed photo to show detail)

I’m also wondering if I should be attempting to create a more tailored structure. I’ve been following Sherry’s RTW sewalong, which is lightly-structured but not really Tailored-with-a-capital-T. Neither was the inspiration garment for this project, of course, but I’m wondering if that’s some of the look that’s missing. Hard to say, hard to say. Maybe a little bit late at this point, too, unless I want to pull the whole thing apart and add a fully tailored front (it’s not like I have a shortage of hair canvas…)

Grum. It doesn’t help that I’m not allowed to take fit photos, and he’s not exactly keen on standing around while I attempt to note down every little wrinkle.

But he does like it. Or says he does.

On to construction and confusion.

Sherry has one lovely post on sewing a sleeve vent, which she helpfully links to from her sewalong. And I obediently followed her directions for adding a mitred corner to the sleeve pattern.

For both the upper and under-sleeve.

For future reference, you only want the mitre on the upper sleeve (the top portion of the vent). The under sleeve needs a regular corner to underlap beneath the top side of the vent.

So, unless I wanted my vents open, I either had to re-cut the under-sleeve (which I doubt I have fabric for) or get creative.

I got creative. I pieced in a little snippet of left-over block-fused fabric. You can see just a little bit of the seam. It’s a bit bulky, but it’s going to be invisible once the buttons are stitched on anyway, right?

Next up—figuring out how to line a vent. Ideally without resorting to massive hand-stitching, although I must admit soothing, mindless hand-stitching does seem a bit more attractive than brain-busting RTW-style sitching tricks, right now. Hmm. Maybe I’ll insert the whole damn lining by hand. If not, I’m thinking this book should cover it.

If I can get a good fit, anyway.

I have a confession. I was bad. I sewed yesterday—pretty much all day. This doesn’t happen very often—in fact, I think this is the first time in months that I’ve sewed to the point where I was tired of sewing.

We had planned to spend the day at the river, but Syo wasn’t feeling well, so I wound up dropping Osiris and Tyo off and heading home with the saddest child to ever miss out on a day of fishing (Osiris caught his first fish last week, so it is officially Fishing Season chez Isis). The upshot was, I bundled Syo up on the couch with blankets, hot lemonade, and H2O (ugh) streaming on Netflix, and headed downstairs to sew. Anything to escape the Australian mermaids.

I finished off another version of the off-the-shoulder kids top (McCall’s 4821)for Syo—she had cut out the pieces (BY HERSELF) weeks ago, but I had black thread in the machine for stitching the Pink Suit, and then I was busy with slips. This version is from her pink leopard spandex, and fits much better than the ever-growing thin knit of the first version. Which almost makes up for the annoyingness of the pattern, and, y’know, the fact that it was cut out by a nine-year-old. The combination of leopard-print with the one-shoulder style does give it a distinct, mm, “Me Tarzan, you Syo” vibe… I used my “athletic stitch” to topstitch the elastic around the neck/armholes this time, just out of curiosity—it worked fine, although I’m not convinced it’s any better or more “professional” looking than the triple-stitch. The hem isn’t the prettiest—I didn’t bother using any steam-a-seam, just folded over and stitched away. Can you tell I really don’t give a flying f#&$ about this little shirt? On the other hand, I have every confidence that Syo will wear the snot out of it.

And then I worked on Osiris’s jacket. Yes, that long-neglected UFO that’s been hanging over my head since before Christmas. I finished the fusing and got the entire shell assembled. I even (ZOMG) stitched sleeve vents (now I just have to figure out how to line them). But I didn’t want to get ahead of myself before checking the fit, so I called a halt before cutting the lining.

So I moved on to Syo’s current pet project. She wants a new housecoat, reminiscent of Tyo’s. Except, not a kimono. But with the applique and stuff. Last time we were at Fabricland, she picked out a white, not-as-thick as-I’d-like, but inexpensive, fleece. After some discussion, we settled on the directions described in Sew What: Fleece (which I won in a giveaway from the gracious Clio) draft the pattern. And, well, I suspect she’ll be happier with the finished product than I am, but anyway.

In fact, I sewed so much that I’m going to milk it for the rest of the week and dribble out more detailed posts every couple of days.

One thing I did do this weekend was go through the jackets, boots, and other outer-wear—ousting the worst of the winter stuff (so if it blizzards, it’s my fault) and bringing in more of the summer stuff. Unfortunately, this also brings to the fore the more painful side of sewing for your children—what to do with the handmades they’ve outgrown. Now, I’ve said before that I have an excellent hand-me-down chain, and I do, in the form of two little nieces, but we really hit a lot of style issues going from Tyo to Syo. This jacket, my first “real clothes” make, is now too small for Tyo. In fact, it never really suited her, but for some reason it looks ADORABLE on Syo (I think it may suit her darker colouring and broad shoulders better). Syo, however, would rather wear a potato sack. Similarly, she is unthrilled with wearing the first pair of jeans I made Tyo, and the jean-jacket I made Tyo. Although I’m hopeful that practicality will win out in the last case. Which puts a big hitch in my hand-me-down chain, because my stylish sister-in-law gets a little annoyed when I send her stuff that she’s going to have to store for years and years before it’ll ever remotely fit.

But I sewed! Helped by the fact that Osiris and Tyo didn’t want to be picked up until 8:30 that night (after Tyo’s bedtime, I’ll add). And for once, I’m ready to do something else…

Tagged as coat, coats, For Syo, Frock Coat, housecoats, in progress, McCall's 4821, too much talk

Once again, I’m not allowed to photograph Mr. Isis in the muslin—heck, I’m barely allowed to PUT him in the muslin, and then it’s off before I have a chance to really check the fit. Argh. Anyway, I shall attempt to write down some notes of the fit so I don’t forget.

Things I still have to check because I don’t have photographs to reference:
What’s particularly amusing to me is that some of these changes, in particular the shortening of the body and lengthening of the sleeves, are ones that I typically do as well. Which means that our children are probably doomed in this department. Sorry, kids.
And now the ten-million-dollar question—second muslin or not? >_<