Once more with feeling!

I made another version of Kwik Sew 717, this one with absolutely no lace. Plain jane, pure function. I think I’m almost done with the slips. Almost. Although there’s still a couple of patterns I’d like to try and Funnygrrl sent me some great skin-tone fabric it’d be awesome to use. Cuz she’s awesome that way. Especially her latest post on body image and negative self talk.

There isn’t much to say about it. I made a slight small-bust adjustment, removing about half a cm from the width of each cup, and shaving about the same amount off the bottom. I should’ve left out the two funny little darts and kept the gathers, but I didn’t think about this until after the darts were cut and sewn. So the cups aren’t as pretty as they might be otherwise. They do seem to fit better than the first ones, at least sans bra.

I used the shell hem, top and bottom. I might be getting good at it.

The first slip I had lengthened about four inches; this one I made the original length, just for variety. I didn’t need to take in the side seams on this one. Maybe because the fabric is less stretchy than the lace, maybe because the cups fit better so I didn’t feel the need to pull it as tight to get “fit”. You can still see some puckering on the side seam—I didn’t stretch quite enough, I guess, while sewing them. The Rocketeer is a workhorse, but she may have a few tension issues. Probably a machine spa day would be in order… 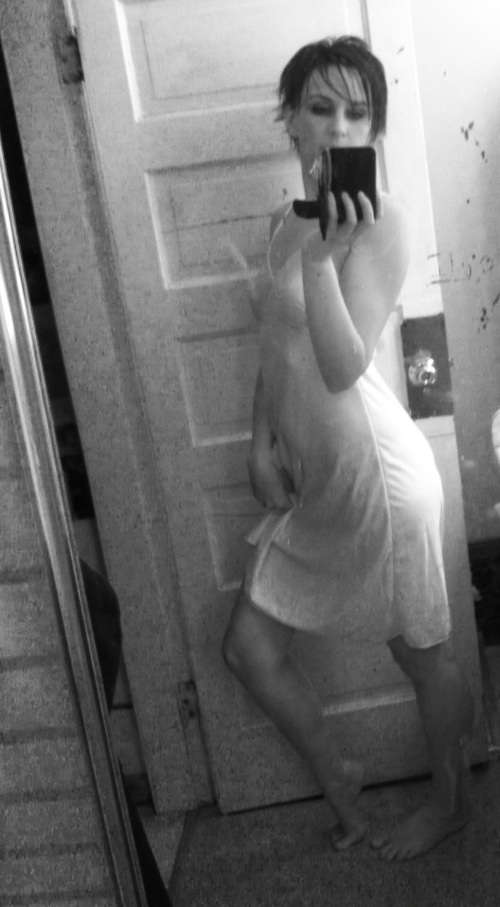 And you get arty modeled photos because that’s the only filter that didn’t show anything under the slip. Not great but better than dressform pics. I hope.

Happy eggs ‘n bunnies day! We’re off to the farm to enjoy “spring,” which in the last few days has included about four inches of snow and freezing rain, which I think is actually worse than a full-blown blizzard. But hopefully we’ve turned a corner now. Because I have springy dresses to wear with my slip, dammit!