I didn’t plan on spending this weekend sewing for my children. But no sooner had I finished Syo’s stretchy outfit (yes, there’s a shirt to go with the bike shorts, but frankly it didn’t work out so well and I haven’t even bothered hemming it. Which isn’t stopping her from wearing it, but anyway.) then Tyo had to assert her requirements. 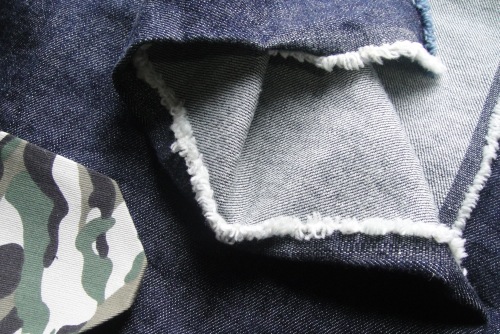 You see, the other week Tyo and I found ourselves on the far side of town, in proximity to Fabric Depot, a large independent fabric store I hadn’t yet had the occasion to check out. So we did. Their website boasts that they are one of the largest single fabric stores in North America. Which may be true. I had high hopes of finding some good-quality stretch denim, having largely given up on my local Fabricland for this.

Initial impressions were quite promising. A whole room of zippers. Another of lace and elastics. Beaded and sequined panels and appliques to outfit a thousand bellydancers.  An entire upstairs devoted to home-dec fabrics—not what I was looking for, of course, but impressive and some very attractive.

Downstairs again, a series of crowded warehouse-type rooms, fabric bolts stacked on shelves all the way to the fifteen-foot ceilings, often wrapped in plastic to protect them from dust. And there were truly gorgeous fabrics in there, too. The problem was finding them.

There seemed to be, again, a lot of home-dec. A fair selection of swimwear/dancewear lycra knits. I don’t even kinow what else, really. Not only was the seleciton overwhelming, the layout wasn’t condusive to finding anything. Eventually I had to ask to be directed to the denim section.

It was a single shelf on a single unit. The denim range, though small, was gorgeous—a lot of lovely finishes and weights—but none of it was stretch. Not one bolt.

My fantasies of sturdy denim in an interesting wash (or even RED!) with just the right amount of lycra came crashing down around my ears. However, the price was right, and we were on the far end of town, so I selected a lovely indigo wash with great texture (and a soft enough weave that there’s a hint of stretch) and Tyo picked out a metre of camo print.

Of course, Tyo could think of nothing for her camo but the centre pants from this pattern—draw-string-bottom capris. She was terribly excited until she realized that the pattern lacks the other attributes necessary of camo pants—waistband, belt-flaps, POCKETS.

So, we went back to our mainstay of kids’ patterns, that gorgeous Patrones Niños I got from Her Selfishnesslong and long ago. It has any number of jeans patterns, including a varietyof capris, including drawstring capris. However, the ones Tyo

eventually settled on (perhaps without too much thought, but anyway) were this pair. Which you can see almost nothing of except that they  have a loose, below-the-knee leg. The line drawing reveals slightly more (although it’s not actually accurate about the change pocket, if you look closely at the photograph…), including some nifty back pockets.

Anyway, we spent yesterday evening tracing the pattern (I remembered to add seam allowances this time!) and cutting it out. I even managed to track down a zipper of the kind I use for jeans—I thought I was out. We debated the merits of topstitching and settled on black. And this morning, I started merrily stitching away.

And now I’m out of black thread. 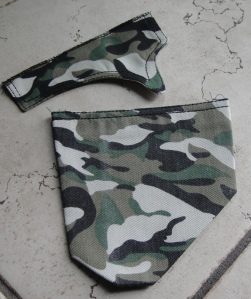 Back pockets, with flap

Somewhere in this house, I’m quite certain, is a massive jumbo spool of black thread. But can I find it? There’s plenty of serger thread, but I’ve been suffering catastrophic failure on the jeans I made last summer that I used it on, so I am reluctant to use it for regular stitching. And, of course, it’s May Long (aka Victoria Day) so nothing is open, plus it’s pouring. Which may not deter those of you from soggier climates, but I don’t even own an umbrella, much less a rain-coat.

So instead I’m blogging half-done kids’ jeans, and debating what I should do with my gorgeous non-stretch denim.