In about 1997, I stumbled upon two pairs of bell-bottom Wranglers, presumably vintage but more or less pristine, at a garage sale. They were a little big, but at least that meant they sat a bit low on my hips. In those days, stretch denim and low-rise pants had not yet penetrated to my little backwater… I was still wearing my Levi 501s and trying to figure out why anything that fit at the waist had huge flaps at the hips.  At seventeen you don’t really have a clear sense of your body… all I knew was that the look I was seeing wasn’t quite right. I was also still wrestling with my 80s-bred distaste for any pants that flared at all. The wranglers hung off my hips at the perfect level, though, and if they didn’t hug or skim anything, well, as long as I could show off my tummy, at that point I didn’t much care. I wore them with boho shirts and a metal-link belt that had belonged to my mother in the 70s, if not the 60s. I didn’t realize it at the time, but I would be wearing bell-bottoms more-or-less exclusively for the next decade. 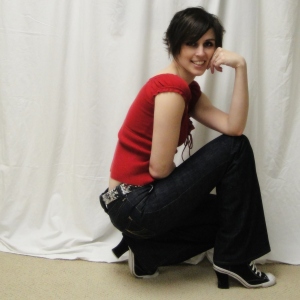 Although I was never a serious devotee of the flare (I don’t have the hips for wide ones), I was a late adopter of the skinny jean, as well—I got my first only a little over a year ago.  But I haven’t had non-stretch, old-school flares since I ousted those Wranglers, round about the birth of my first child.

Then, Joy’s Bellbottom Challenge cropped up and, coincidentally, I wound up with two metres of absolutely gorgeous dark-indigo non-stretch denim. Obviously the two would have to combine into some seriously retro bellbottoms.

Not, however, as huge and sloppy as my old wranglers, however. So, I went to my handy-dandy Ellen pants pattern, which is my only non-stretch pants pattern (that I know fits, anyway…), traced it off, made the adaptations for jeans (back yoke, front pockets), brainstormed a couple of different ideas for the closure and the pockets, and got to work. Ellen is a great pattern for mods like this because it’s completely free of style details if you leave off the pockets.

I opted to have the legs flare from about mid-thigh. I probably could’ve gone a bit lower, but I wanted, for whatever reason, more of a wide-legged look than a hip-hugger look. I added what seemed like it would be a modest, but definite, flare. 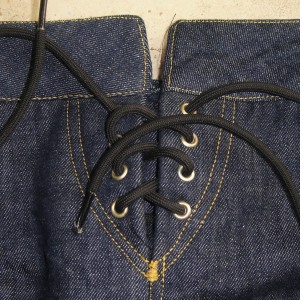 I decided, for no particular reason, to make a corset-closing front rather than a traditional fly… I had a pair like this shortly after Tyo was born, and I always loved the feature (I have a bit of a weakness for things that lace up.). I haven’t decided whether to add grommets to the waistband itself, or buttons with a tab stretching between them. We’ll see. Although inserting grommets is always a little nerve-wracking, this was still simpler than a fly, for those of you who are chicken of flies and not afraid to look a little out there ;).

I did my new favourite waistband-finishing technique, binding the inside with bias tape (this time the blue satin left over from my springy coat facing), and, since the Ellen has 1.5 cm seam allowances rather than the 1cm of the Jalie pattern, I decided to try my hand at (ulp) felled seams.

They were… ok. Definitely not perfect. In particular, although my yoke seams lined up at the seam-line, the way the seam-allowances interact in a flat-felled seam means that after they were folded over, the yokes look offset. Boo. On the up-side each seam is only stitched twice, instead of three times, and there’s less swapping back and forth of threads. The trimming and pressing takes a lot longer, though, and I think I get more even topstitching with the “cheater” method. Hmm. We’ll see. A big part of me is still convinced I’m not making proper jeans if they don’t have felled seams. Hmm.

I hemmed them LONG. If they don’t shrink up in length, I may have to shorten them. That’s ok. I’ve been traumatized by too many too-short pants over the years to mind a bit of extra length. And it’s fun to put on heels and still have only my toes peek out.

Click through to the full-size rear photo to get a better view of my back pockets… I made them shield-shaped to echo the corset-fly.
My hubby, a diehard child of the 80s, has already expressed his dislike of them. I explained that I think I’m allowed to own one pair of jeans that he doesn’t like. He countered that he doesn’t own any jeans that I don’t like. I pointed out that’s only because he won’t go shopping without me. I think this means I win, don’t you?

It really doesn’t show in the pictures, but I also did one vintage thing that I’ve never before attempted on jeans.

I pressed creases front and back in them. I think they look very smart.