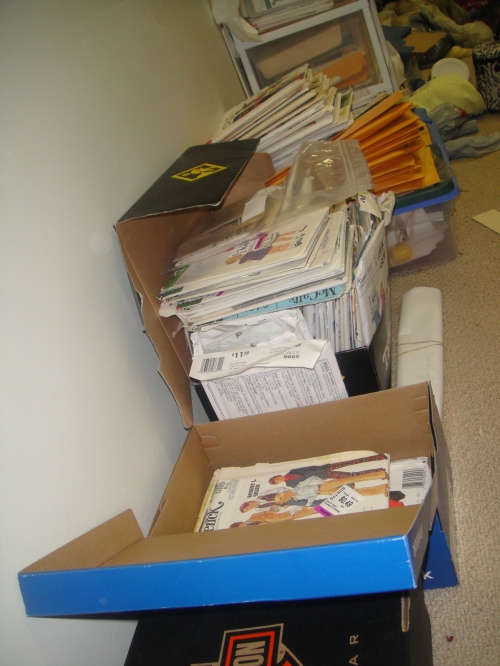 So, from time to time over the last few months as I’ve gone from pattern thrifter to pattern hoarder, people have asked how I organize or keep track of all the patterns (and how many, ulp, there are.) The answer to the first question, frankly, is “Not well,” especially when it comes to organizing the physical patterns (which currently involves a plastic multi-drawer thingy and a lot of shoeboxes). On the electronic side, I’ve tried a couple of different methods, but the main one is an iPhone app called Sewing Kit. I don’t have every single pattern I own in there (especially the electronic ones) but I do have a fair number (erm, 211 last count), and since I got it last summer I’ve been pretty good with putting in my new purchases. I like that it’s on my phone (so handy when I’m out and about) and that I can take the photos and add them straight in, rather than having to transfer them to the computer and set things up. I’m trying to keep a simple folder of all the envelope photos on my laptop, too, but the info on the iPhone is a bit more comprehensive.

I don’t know that this app is available for anything other than iPhone, so this post may have a bit of a limited target audience… sorry. But anyway, folks, meet Sewing Kit

This is, far and away, the most expensive app I’ve ever bought for my iPhone. It costs $9.99 or so last summer (Although it appears the price has gone down. Which sucks for me, but it’s much easier to recommend it for five bucks than for ten) And it gets so close to being awesome that it’s quite painful, really.

I picked Sewing Kit, as opposed to some of the other stash-tracking apps, because it was the only one that seemed geared towards garment sewing as opposed to quilting. In particular, you can track patterns, stash, people (‘s measurements), and projects all in one app.

This is the part of the app I use most, as I just can’t get too excited about tracking my fabric stash, even if I ought to. For recent Big 4 patterns, there’s a scan-barcode feature that lets you just point the camera of your phone at the bar-code on the pattern envelope—it will download the name, number, even photos from the company website. I don’t buy a lot of brand-new patterns, so I don’t get too much use out of this feature, but it’s pretty handy when it works. If it doesn’t work for a particular pattern, you can enter company (from a customizable list), number, size, category, yardage, difficulty, etc. manually, as well as add photos. The adding photo function is glitchy—often it will crash the program and fail to save the photo. The workaround is to take the photos first, and then after touching “Add photo” choose “select existing”, which works fine and means you have a real copy of the photo to upload to your computer or whatever if you (like me) try to keep track of patterns there as well. It’s a little clunkier of a process, though.

I have a couple of issues: one, it would be nice to be able to include a pattern in more than one category (eg. a wardrobe pattern that has shirt, pants, and jacket). The second is that there’s not a whole lot of browsing functionality—it’s easy to look up a particular pattern, but the thumbnails are kinda small (as necessary on a little phone) and it would be nice to have a full-screen photo-view without going all the way into the edit-photo feature. It’s also not really easy to call up the individual categories for viewing (say, to see all your jacket patterns)—you can do a search for that category, but it’s not like you can just pick it from a list, and again, a photo-browsing function would be nice.

Pattern images (these ones were downloaded automatically because it is a new pattern.)

Every once in a while I’ve run into a glitch where it simply stops displaying the patterns in the pattern list. It still says there’s however many patterns there, but they don’t show up, which is pretty heart-stopping. Doing a search of any kind seems to clear up this glitch, but still, weird.

As expected, you can upload photos (same issue with crashing), length, width, fibre and care information about your various fabrics. I should probably use this feature a lot more than I do, especially to keep track of yardage.

Although it doesn’t get the most use, this is a really handy feature of the app, and was probably the one that tipped me over into buying it. It lets you record a person’s name, photo, and measurements (selecting from a list of basic measurements, with the ability to add custom measurements as well) for future reference. I find this really handy as I’m always losing the little bits of paper I write measurements down on. It even has non-sewing use, as I used it the other day when picking up undies for the kids to choose the right size. 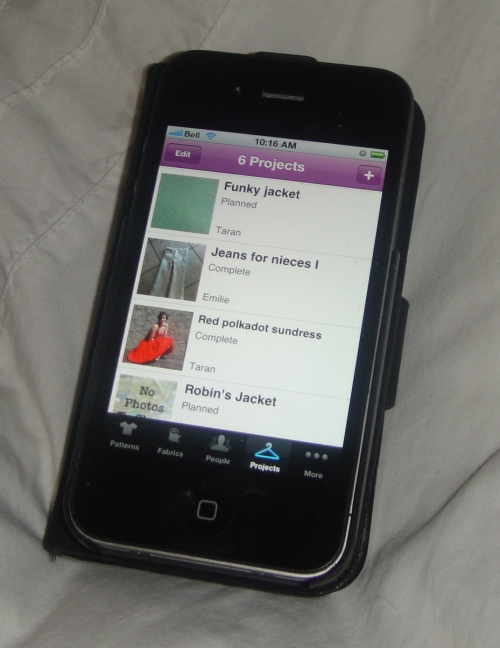 Projects pull together all the other categories—you can pick which pattern you’re using, which fabric, and who it’s for, as well as add information about notions and anything else you might need. I hardly ever use this category, at least partly because I’d rather blog this sort of stuff, but it would be perfect for pulling together your shopping list (notions, lining, etc.) and planning things, if you were that sort of organized person (which, as we’ve long ago established, I am not.) There are a couple of things that really niggle me about how this is set up, though—the lists it calls up of your patterns and fabric don’t show the images, so you’d better remember the pattern number or the name you gave the fabric. Also, there’s no way, once you’ve selected a pattern, to jump from viewing the project directly to viewing the pattern—you’d have to switch over to the pattern category and look the pattern up (say, to check on the yardage it requires). Again, not a big deal, but not slick.

Overall? I’d give it about a 7 out of 10. If there were anything out there with similar functionality (and please let me know if there is, there wasn’t when I looked last but times do change rapidly in the world of apps) I’d probably score it lower, but it does do what it does in a way that’s handy, portable, and I’m likely to have with me if I decide to pop into the fabric store on a whim. You can export/back up the information, although I haven’t actually tested transferring it to another device (like my iPad). There is an HD version for the iPad but I haven’t bothered to spring for it, either—the reviewers were a bit crabby about the lack of ability to sync between the apps on different devices.

It’s just not a very slick app. To enter information, you often have to go in through several  screens to get to actually enter the number. Even though it’s something you’re always going to entering a number for (like a measurement), the default keyboard is the alphabet, not the numeric keyboard. There’s no “overview” function for viewing details, just the edit view—basically, the functionality for retrieving and overviewing information isn’t as great as the functionality for entering information (and even the entering function isn’t the greatest). There’ve been a few improvements in the year or so that I’ve had the app, but not a whole lot.

Is slick too much to ask? I dunno. I don’t regret my purchase, and I do use it plenty, but it could be so much more…

Tagged as App review, iPhone, organization, too much talk