I really hate sewing with chiffon. 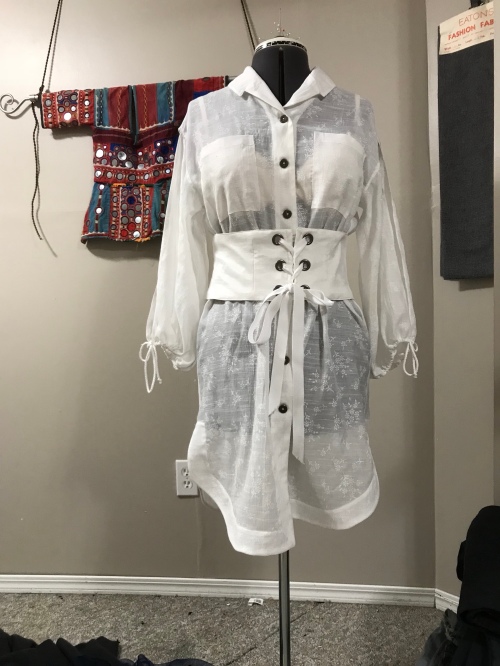 I didn’t really think of this sheer rayon-poly blend being a chiffon when I picked it out—technically it isn’t. But it shares all of the qualities that make sewing with chiffon unpleasant—shiftiness, slipperiness, a tendency towards fraying, and sheerness that means the insides have to be as tidy as the outsides. Also, hard to unpick. Yugh. 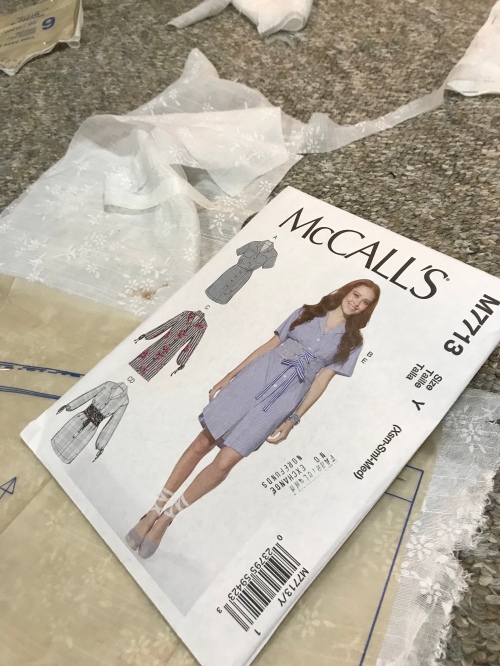 This boxy, oversized shirt dress pattern, McCall’s M7713, is really outside of my comfort zone, too. What I like is the lace-up belt. Also it was on the April mailer, so free extra project. Many an unwise project has been spawned that way. 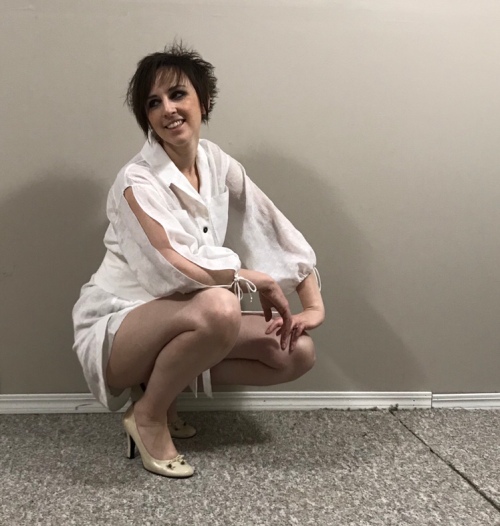 While I may not be a fan of the boxy shirtdress, my husband is a fan of those scenes in eighties movies where the girl is wearing the guy’s shirt around the house the morning after. So I guess I’m hoping to channel that vibe. 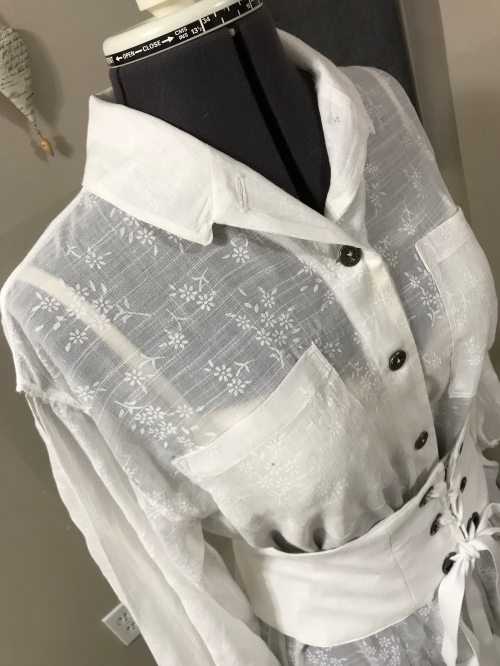 This pattern does have a really cute little collar, so that was fun to try out. I did not like the instructions for handling the back yoke, though, so I kinda went off-road, and I’m not overly satisfied with my own version either. Possibly some googling would’ve been in order. Or, y’know, pulling out my old Colette Negroni instructions, since it’s basically a funny-shaped camp collar.

I managed to get the front pockets basically even. The symmetry pretty much ends there. 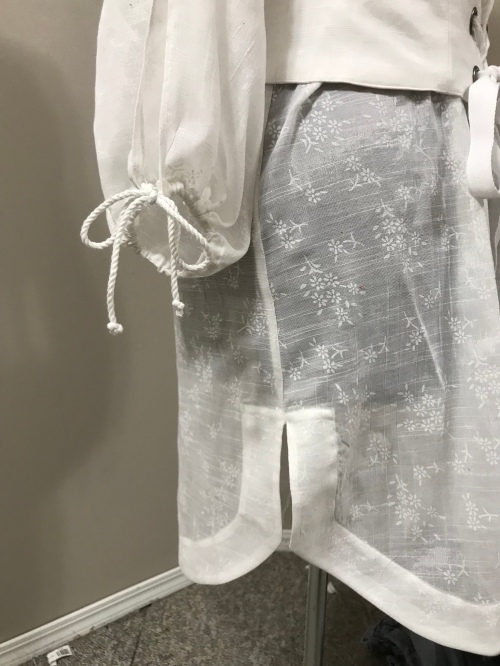 I like the faced hem, and the cute split sleeves, which I shortened to 3/4 length. This photo is of the good side.

I discovered when I went to set up the project that I have only two white serger spoools left. Not sure how that happened, but it meant that this became a serger-free project. French seams all the way, even when they’re a bad idea like around the armscye (extra bad with the sleeve split.) 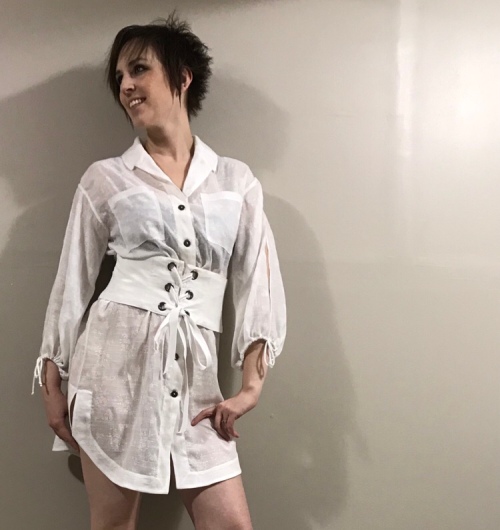 Because the fabric wasn’t traumatic enough on its own, my iron’s tendency to spit yellowish water at inopportune moments is also well displayed over several parts of the dress. I think there’s some chocolate on there too. Just shoot me now. 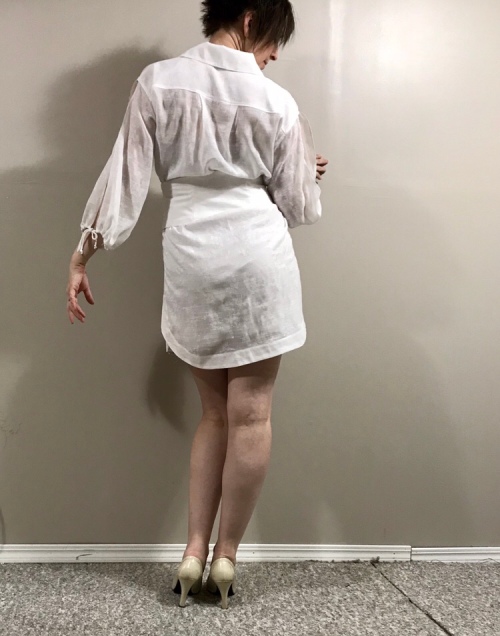 On the other hand, I actually like it more than I thought I might. It’s pretty fun. There are a lot of cute details—the shaped faced hem, sleeve splits, obi/cincher belt, and of course the cute collar. 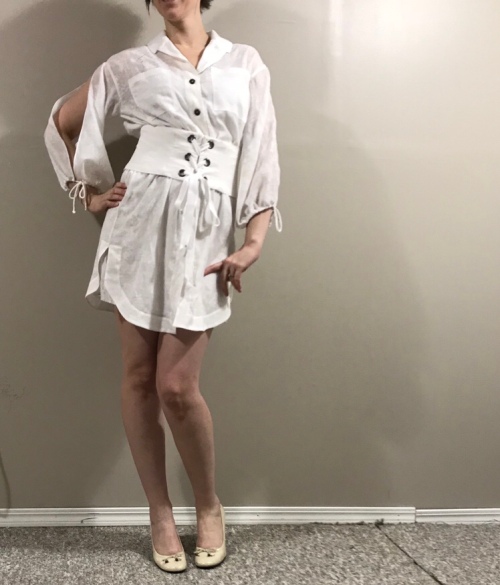 I made the split sleeves only 3/4 length, as I thought at full length they would be a bit much. I’m very glad I made that decision. 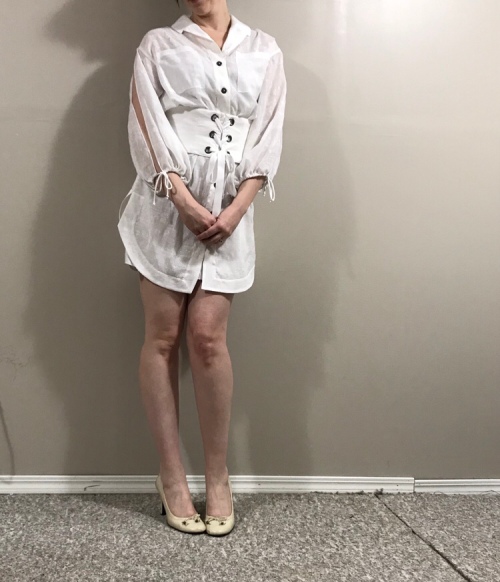 You may have noticed, as a dress is is SHORT. Especially with those side splits. (Mine might be split a little higher than the pattern intended, as I went a bit off-road from the instructions in that area, too. So it may be destined for tunic-hood. Though black boyshorts underneath would be pretty fun, I have to say. 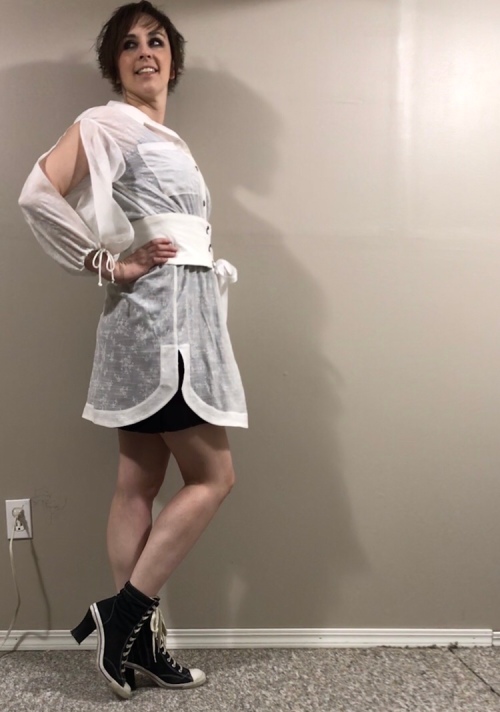 The bottom half feels very narrow compared to the billowy, blousy top, which is interesting since the pattern is more or less straight and I actually graded up a size below the waist. The whole thing feels a bit top-heavy. On the other hand some over-the-knee-hooker-boots might offset that perfectly. Sadly my wardrobe is lacking in that department. 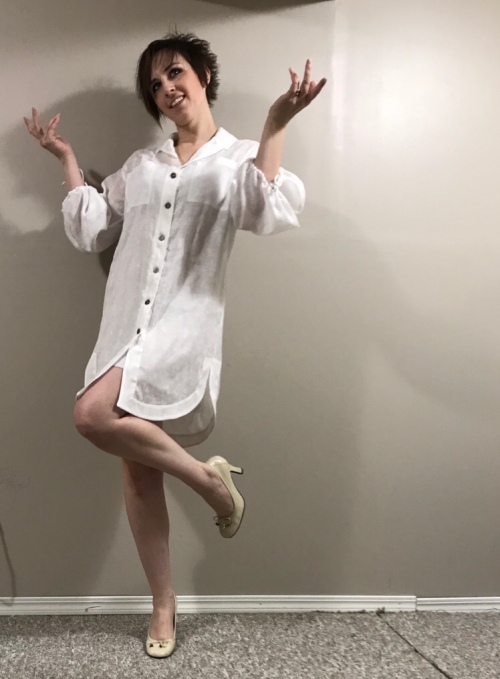 It was definitely fun to take these photos and try styling it with different underthings. 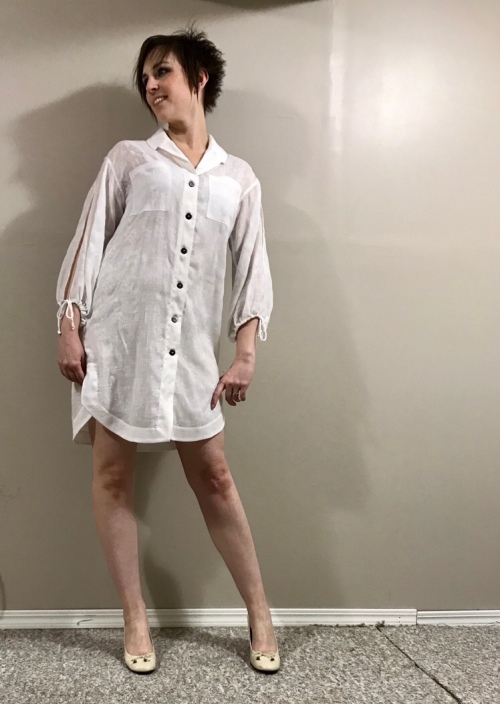 Even the unbelted view was fun—a lot more understated than with the belt. 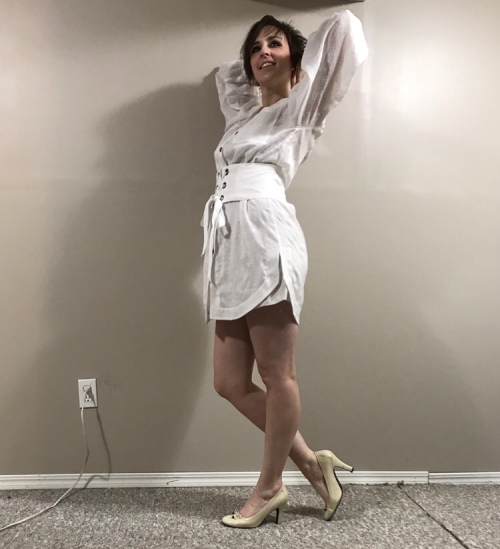 So all in all, a harrowing process with an imperfect result that actually looks pretty cute in the pictures, if not up close. 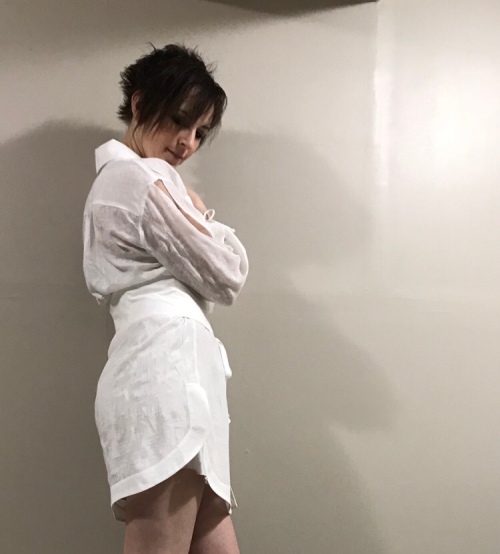 And considering that it’s still firmly winter outside here as I write this on Easter weekend… at least it’s summery. I’ll take it.

3 responses to “The masochist dress”