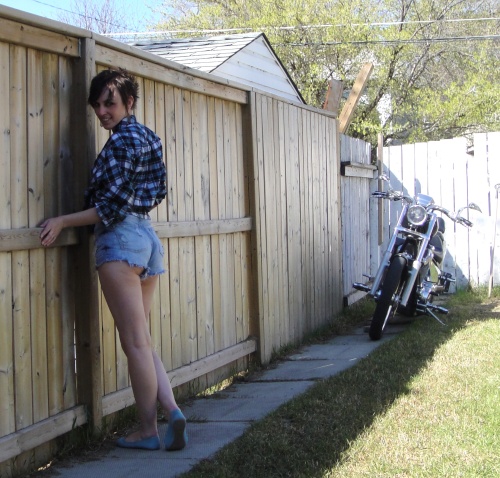 Not much to say here.

I picked up this fabric a little after Christmas, when it first went half price. Good thing I did—it was gone within a few days of that. It’s the same fabric as my plaid skirt, just in a different colourway. I bought it for Tyo, since she’s been enjoying her red flannel so much, but as soon as I got it home my husband pounced on it.

Kwik Sew 2258 has been on the list of things to sew him for, oh, a couple of years now, and this seemed like a good time to try it out since I knew he wouldn’t want a fitted flannel and its “vintage” promised an appropriately relaxed fit. It’s actually a bit more shaped than I expected—I straightened the side seams to go with the plaid.

Unlike other shirt patterns I’ve sewed with, this KS one had only 1/4″ seam allowances. Throughout. Now, I’m a fan of narrow seam allowances generally, and I got excited for a bit because the 1/4″ SA would actually work with my flat fell foot! BUT, on a soft flannel it was really easy to miss the seam allowance if there was a miscut (and I am not the world’s best cutter) or for the seam to ravel on handling before I could get it finished. I’d like to try it again on a finer shirting. With felled seams. (They felt too firm for the soft flannel feeling I was going for.) I wound up having to darn part of the back yoke where I had missed the seam allowance. Bad seamstress.

I cut the M to go with his 40″ chest, and added a generous 4″ to the sleeve length (based on previous experience), though that might have been overkill. I graded up to a size L in the collar, as collars are always too small on him, but wound up needing to add about 2″ more.

I tried very hard to match my plaid meticulously, except for cutting the hard bits on the bias. (Collar, cuffs, yoke and plackets.) I succeeded horizontally except at one armpit, and failed miserably at matching vertically across the fronts. I keep thinking I know how to do that and failing at it, so I should really re-read all the tutorials. 😦 Sewaholic has a great one that makes perfect sense when I read it. 😦

I cut & sewed it when I had a few days off after Easter, then realized that none of the buttons I had enough of were suitable* and had to hold off for a little while, at which point I had lost all drive (plus he was already wearing it—it’s not like it’s destined for office wear.) 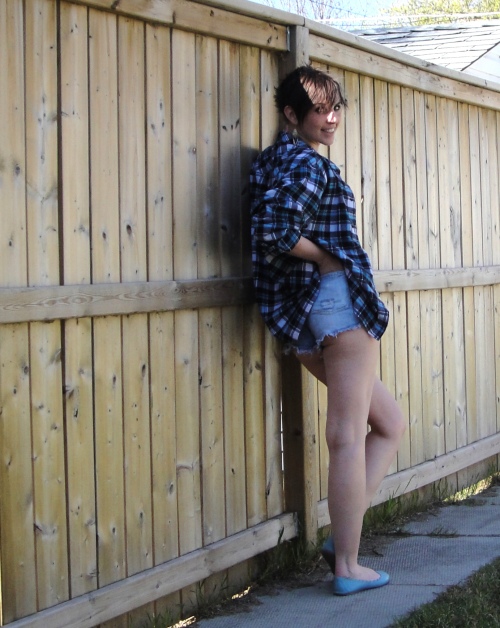 Eventually, though, I managed to get some plain black buttons and see them on, and it’s been in pretty common rotation since. And I even managed to cut another Burda 6849 out of the remainder for Tyo, assuming I can motivate myself to actually sew it up. 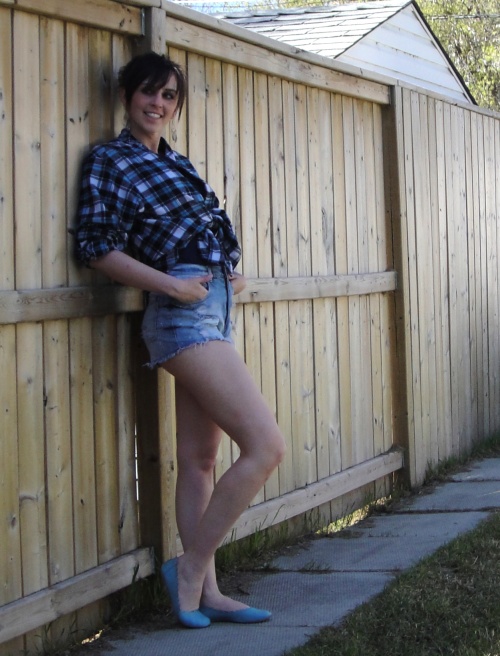 And that’s about it, really. Oh, the front knotted look is as per the husband’s style instructions, and the high-rise-ass-hanging-out-shorts were acquired by one of my children from a friend. My husband forbid them to wear the shorts out of the house, so I have stolen them. I haven’t worn anything with this high a rise since I figured out I could cut the waistband off my Levi’s 501s in about 1998. It feels profoundly weird.