Last Saturday I wound up unexpectedly home alone with my children all evening. Of course I was going to sew (I’m a single-minded obsessive after all) but, rather unexpectedly, they wanted to join in. First Tyo, then Syo, and they both wanted to make… Underwear!

Tyo, who just completed her first sewing unit in Practical & Applied Arts at Xmas, got her heart fixated on black lace boy shorts. I had some fabric I figured would be perfect—a hefty stretch lace with decent recovery, that I made a great pair of leggings from last year sometime (and didn’t blog, apparently). After a lot of googling I convinced her that not only did I know what boy shorts are, but that the Rosy Ladyshorts were, in fact, a boyshort pattern, and she agreed to make a slightly modified version—modified by adding to the bottom edge so that when she sewed on the stretch lace edging she could line its outer edge up with the fabric, and trim the excess away later. Considering she’s never sewn anything stretch before, never mind applied elastic by feel, I think she did awesome.

The crappy part is that since she has a pair of this fabric, I can’t make myself one, and it was a really great idea!!!!

Syo wanted an aqua pair to match two of her bras, and we managed to find a lace in stash that was almost exactly the right colour. And fabric, but that’s less astonishing. Unfortunately not a stretch lace, which took some explaining, but we used it for the side fronts of my hacked Watson pattern. Now for some reason I feel a wee bit weird about showing you photos of my preteen’s underwear so I’m just showing you the fabrics. 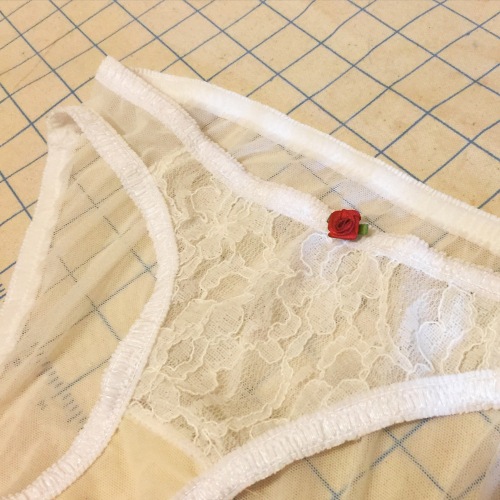 So imagine this pair but made of not-see-through aqua knit with the lace at the side rather than centre front. I wound up doing most of the construction as it was a bit more complex than was probably a good idea, but Syo cut it all out on her own.

The convenient part about all of this is both children pretty much wear my same size right now in horizontal measurements, so there was little to no adjusting of size. Although that may also be saddening. /sigh.

And me? Well, I made up this very smart pair  of Ladyshorts in a camo mesh and got all excited…

And, for you camo haters out there, you have a win. This pair was a total fail. The lace was perfect but the mesh has way too much stretch in one direction, little recovery,  and absolutely none in the other, and they were BAGGY! And no amount of taking them in would fix it. UGH. I feel like the Rosy Ladyshorts, more than any other underwear pattern I’ve made, really depend on the fabric having just the right amount of stretch and recovery. When I nail it, they’re amazing, but when they don’t work, the fail is epic. Ah, well. It’s not like I don’t have lots of other underwear in my drawer…

I really want a black lace pair like Tyo’s, dammit.

14 responses to “Sewing with offspring”